Leader of Pan Niger Delta Forum (PANDEF), Chief Edwin Clark, has sent an open letter to President Muhammadu Buhari, accusing him of not only treating the people of the Niger Delta region ‘‘very badly and shabbily’’ but also lying about his claims of bringing peace to the region.

He said the President’s claim of bringing peace to the South-south geo-political zone, was untenable, untrue and without foundation, warning that the deliberate neglect of the region, might invoke severe consequences.

In the seven-page letter dated January 27, 2022, the former federal commissioner for information in the First Republic wrote: ‘‘Please Mr. President, I respectfully wish to state that your claim of bringing peace to the South-South geo-political zone, is untenable, untrue and without foundation. The deliberate neglect of the South-South, can lead to the explosion of the keg of gunpowder upon which we are sitting in the Niger Delta.

‘‘Our people are very conscious of the developments that your government is carrying out in other areas of the country with monies derived from oil exploration in their area. We repeat, our agitation against the use of money looted from our area by the late Gen. Sani Abacha, which was recovered from the United States of America, exclusively for the construction of the so-called mega projects by the federal government, and the illegal confiscation of 2.4 million pounds from the British government as loot recovered from the former Governor of Delta State, Chief James Ibori, under the flimsy excuse by the Attorney General of the Federation, Abubakar Malami, SAN, that it was the federal government, which as a nation, negotiated with the British government. And that it was an agreement between the two governments that the money should be used for federal projects. This is not true.’’

‘’The deliberate neglect of the South-south can lead to the explosion of the keg of gunpowder upon which the region is currently sitting on’’.

In the letter entitled, ‘‘My Disagreement with your claims on the Niger Delta region,” the elder statesman warned that any attempt to scrap the Presidential Amnesty Programme may produce unpleasant consequence.

According to him, President Buhari has not only failed to deliver on all the promises he made to the region, he had also during the early years of his administration targeted and witch-hunted people of the region who worked closely with former President Goodluck Jonathan.

He said: ‘‘I hope this letter meets you well, as we have entered a New Year 2022, which is a watershed before the much-awaited year 2023, during which Nigerians expect your government will deliver credible and peaceful elections to our country.

‘‘I am writing on Your Excellency’s recent statements regarding peace and security in the Niger Delta, amongst other parts of the country. Your Excellency was specifically quoted to have said that your government has succeeded in improving upon peace in the North.east and South-south, from what you inherited.

‘’Your excellency, I beg to, somewhat, disagree with you on the general state of insecurity in the country, which is presently, in a state of near collapse. Of more concern to me is your claims with respect to the Niger Delta or the South-South zone.

‘‘No doubt, a good amount of peace has come to the Niger Delta in the past few years. However, your claim as having been the main architect that brought the peace, does not properly convey what transpired.

‘’If you will recall, Your Excellency, before your government came on board, insecurity which had reduced substantially during the tenure of your predecessor, resumed in a very alarming rate. The period saw the emergence of a new group, the Niger Delta Avengers, which virtually held your government hostage, oil production went down to as low as about 800,000 barrels per day. Your government adopted a military approach to quell the agitations, by deploying the so-called ‘Operation Crocodile Smile’ in August, 2016, which did not in any way solve the problem, Clark stressed.

He recounted how he met with then Chief of Army Staff, Lt. Gen. Tukur Buratai( rtd), on the issue of insecurity in the region and the number of meetings he conveyed with leaders of the region in 2016 ‘’in order to solve the problem in a pragmatic way’’, and how these efforts led to the birth of the Pan Niger Delta Forum (PANDEF).

Without mincing words, in his detailed letter, dripping of anger, disappointment and what appears a genuine concern for the interest of a region, which appears tactically being shortchanged, he lamented that Buhari has become terribly divisive and clannish, citing the President and even Vice President Osinbajo’s failure to keep to all the promises made to the region in some of the meetings the government held with leaders of the region.

He said after Goodluck Jonathan’s exit, ‘‘Your Excellency’s government had adopted a cold attitude towards issues affecting the Niger Delta region, prosecuting those from the region who served in his government, citing himself as a victim.

‘‘I am a victim of such prosecution when my residence in Abuja was invaded on 4th September, 2018, by security men from the Tactical Squad, a Monitoring Team in the Office of the Inspector General of Police, who came in two vans, fully armed, to search my house with a Search Warrant obtained from a Magistrate Court in Abuja. The operation lasted for about two hours.

‘‘I wrote to Your Excellency, through my lawyer, Dr. Kayode Ajulo, Esq. But Your Excellency never replied. Then, I was 91 years old. If this had happened to any of my contemporaries in the North, from Kano State, Katsina State, Sokoto State, Kaduna State, etc, Your Excellency’s attitude, I am sure, would have been different.

He said apart from the persecutions, there were also grave concerns about marginalisations and abandonment of ongoing projects in the region. Arising from these, the PANDEF, developed a 16-Point Agenda, to ensure inclusiveness of the region in the programmes and activities of your government. We also began to engage various agencies of the Federal Government.

‘‘Ultimately, on 1st November, 2016, the leadership of the people of the Niger Delta led by me, paid you a visit at the Presidential Villa. The visit was facilitated by the then Minister of State, Petroleum, Dr. Ibe Kachichukwu, included all the federal leaders, high office holders, key traditional leaders, religious, women and youth leaders.

‘‘Similar to our visit to Your Excellency, the Niger Delta people, under my leadership, also visited the Vice President, Prof. Yemi Osinbajo, as Acting President, on 3rd August, 2017, on his invitation, to discuss issues of the region.

Arising from the discussions we had with the Vice President, we called a general meeting in Port Harcourt to brief members on the outcome of the meeting, and to hold further discussions, to be held at the Atlantic Hall of the Hotel Presidential.

‘‘As a follow up to our visit, the Vice President, Prof. Yemi Osinbajo, as Acting President, undertook a tour of the Niger Delta region, to see things for himself.

‘‘Unfortunately, sadly and disappointedly, the promises Your Excellency and the Vice President, as Acting President, made, are far from being looked into, not to talk about considering and executing them.

‘‘For example, the East-West Road project, the major road connecting the region with other regions, remains uncompleted, nearly 20 years since commencement, despite the fact that a substantial portion of the revenue of the country’s earnings, which finances the nation’s budget running into trillions of naira, is derived from this region.

‘‘Today, another environmental pollution is threatening the life span of the people of the region, and that is the sooth, said to emit from the activities of illegal refineries. This is what could have been avoided if the Federal Government’s continuous promises of building modular refineries did not remain a mirage, a pipe dream, an empty promise.

‘‘At the different State capitals and towns, Prof. Osinbajo visited during his tour, he promised that modular refineries will be built to replace the local refining the people are doing. While one is not in support of these youths, but they have to survive, since nothing has been done, almost after five years, the youths have to survive and so continued with the artisanal refining despite its health hazard to them and others.

‘‘Related to the above failed promise, is also the failed promise of relocation of the operational headquarters of the oil companies to the Niger Delta. Yet again, is the failed or lackadaisical attitude of the Federal Government at the snail pace with no substantial work done concerning the Ogoni clean-up. What about the oil pollutions, which still take place every day, and is being poorly regulated? The recent case of oil spillage at the Santa Barbara in Nembe, Bayelsa State, which went on without been stopped for 38 days, with more than 100,000 (one hundred thousand) barrels of crude released into the environment is still fresh in our memories.

‘‘Let me raise another issue, which is still very current, and that is the question of the Petroleum Industry Act (PIA). Before the Niger Delta crisis in the early 2000, we had warned the government to stop the outright neglect of the environment and the damage it is causing our eco-system with the reckless operational activities of the Nigerian National Petroleum Corporation (NNPC), and the oil companies. These warnings were not heeded to, until crisis erupted and all manners of agitations surfaced.

‘‘Mr. President, may I make it very clear to you that the area is sitting on a keg of gunpowder, and any attempt to scrap the amnesty program may produce unpleasant consequences to all, said Chief Clark who advised further advised the President to listen and heed to the various open letters he had written him. 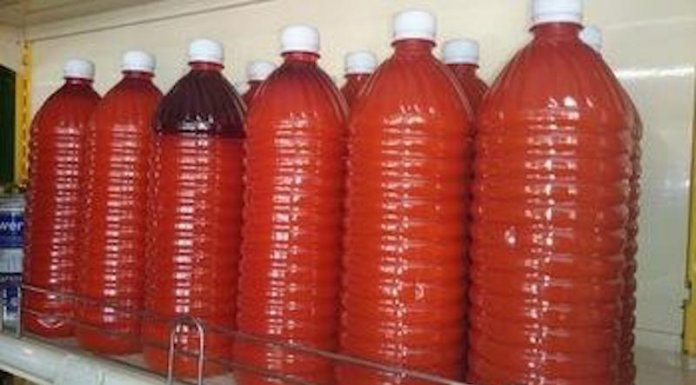