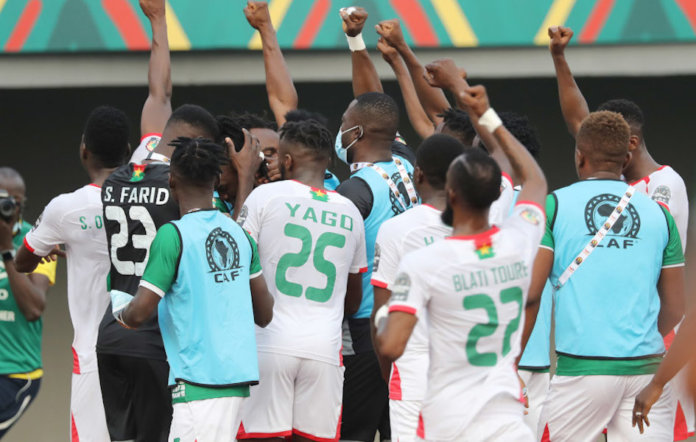 Burkina Faso edged 10-man Gabon 7-6 on penalties – after a 1-1 draw – in an epic Total Energies Africa Cup of Nations round of 16 clash at the Limbe Stadium on Sunday evening.

The Stallions really should have won the game in regulation time, having enjoyed a lead established through Bertrand Traore for over an hour (and against a team which was reduced to 10 men), but the Panthers simply refused to be beaten and sent the game to extra time and penalty shootout which went nine rounds before they were finally put away.

Gabon created most of the early play, but did not fashion any clear chances with which to test Burkina Faso goalkeeper Herve Koffi.

The Stallions then won a debatable penalty on 14 minutes, with Issa Kabore’s powerful run down the right ended by a challenge from Sidney Obissa, who was adjudged to have pushed over the Burkinabe attacker by Moroccan referee Redouane Jiyed.

Bertrand Traore took the spot kick, but his left-footed shot rattled the crossbar and rebounded high into the air before being safely cleared from danger.

Traore made up for his penalty miss with a crisp finish on 28 minutes to put Burkina Faso 1-0 up, running onto Dango Outtara’s superbly-weighted pass before sweeping a low shot past the advancing goalkeeper Jean-Noel Amonome – with the ball finding the back of the net via the inside of the post.

The Panthers’ Aaron Boupendza thought he had scored an outstanding equaliser on 41 minutes, having picked up a diagonal ball to the left of the penalty area before cutting inside and finishing with his right foot, but the offside flag ruled out his effort to leave the score 1-0 in favour of Burkina Faso at the interval.

Gabon made three changes within the opening five minutes of the second half, sending on Louis Ameka Autchanga, Denis Bouanga and Axel Meye.

They created a couple of good chances to level the game, with Meye and Boupendza getting in each other’s way to meet a right-wing cross just before the hour mark, while shortly thereafter Guelor Kanga tumbled under a challenge which could have brought a penalty but was ignored by the VAR.

The Panthers then suffered a major blow midway through the second half when Obissa, already on a yellow card, pulled back Dango Ouattara on the edge of the box and was shown a second caution – reducing Gabon to 10 men.

The Panthers’ desperate scrambling at the back was not in vain, as defender

Bruno Ecuele Manga brought them level in the first minute of injury time at the end of the 90: the centre-back rose highest to meet a corner kick and headed home via a deflection off Adama Guira for 1-1 – and an extra half hour of play!