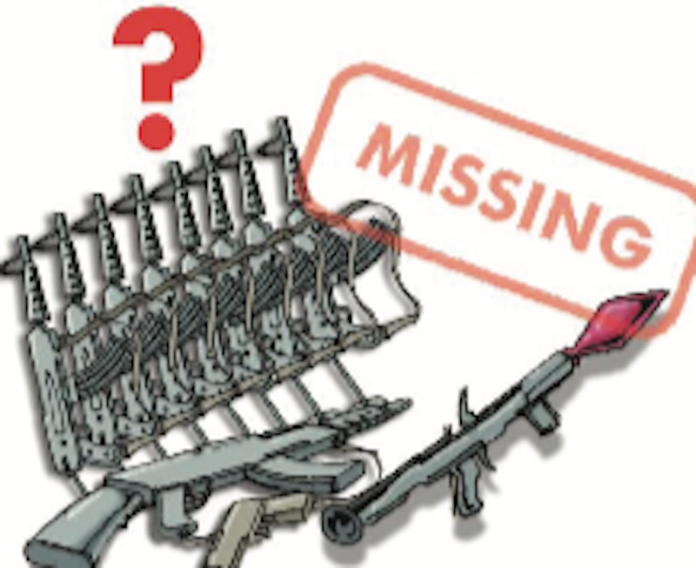 The revelation by the Auditor General of the Federation that about 178, 458 different categories of arms from the Nigeria Police Force (NPF) armoury are missing or cannot be accounted for should compel serious attention from the presidency. We consider the report rather alarming especially in the face of the clear and present danger posed by the activities of insurgents, bandits, kidnappers, armed robbers, and sundry criminal elements who terrorise the country. For any nation, nothing can be more dangerous than a lack of transparency and accountability in the storage of dangerous weapons.

Meanwhile, the report of the Auditor-General of the Federation goes beyond police armoury to other critical arms and agencies of government that whimsically violate statutory financial reporting obligations. The report, for instance, indicted the National Assembly management, as well as the National Assembly Service Commission (NASC) over a questionable expenditure of N9.424 billion that cannot be properly accounted for with any supporting documents. Where a body that is constitutionally empowered to have its eyes at every sector of our national life is deeply involved in unwholesome practices, there is cause for worry. Sadly, this is not a new development. For years, the National Assembly has been found to compromise its duty of ensuring propriety in the conduct of government business by seeking to place itself above measures that would enthrone accountability, all in the name of separation of powers.

However, we are particularly concerned about the situation at police armoury because of the implications for national security. Over the years, there had been reports that official arms were being sold to members of criminal gangs and we had in recent times witnessed the arrest of some police and military officers in that regard. What the report of the Auditor General of the Federation has therefore revealed is the lack of internal control and supervision in the management of weapons. The lack of integrity in the register and monthly returns of arms and ammunition obtained from force armament, force headquarters for various states commands, formations, zonal offices, training, institutions, squadrons, etc., is detailed in the audit report. Despite that damaged and obsolete firearms and ammunition ought to be treated in line with Financial Regulations 2618 which require the destruction to be carried out in such a manner as to render the firearms unusable, that protocol is cynically breached.

The Inspector General of Police (IGP) as the Chief Executive Officer of the NPF as well as the Nigeria Police Service Commission should be held accountable for these lapses. The IGP should provide reasons why records of unserviceable and expired firearms and ammunition were not maintained. He should also forward a comprehensive record of all unserviceable firearms and ammunition and up-to-date record/schedule of expended ammunition to the Public Accounts Committees of the National Assembly.

The resolution by the House of Representatives to probe the audit report is commendable but that presupposes that the legislature is also willing to play by the rules. “The value of the lost firearms could not be ascertained because no document relating to their cost of acquisition was presented for examination,” argued Toby Okechukwu who moved the motion to investigate the report.

“Out of this number, 88,078 were AK-47 rifles, 3,907 assorted rifles and pistols across different police formations, which could not be accounted for as of January 2020”.

One of the major challenges facing Nigerian security agencies, especially the police, is the lack of public trust. This has led to a situation in which Nigerians deny them vital intelligence needed to effectively carry out their mandate of ridding the society of violent criminals. The revelation in the Auditor General’s audit that the inventory of weapons was not properly taken points to a more fundamental challenge with the NPF. It is in the interest of the country that the issue be properly addressed.