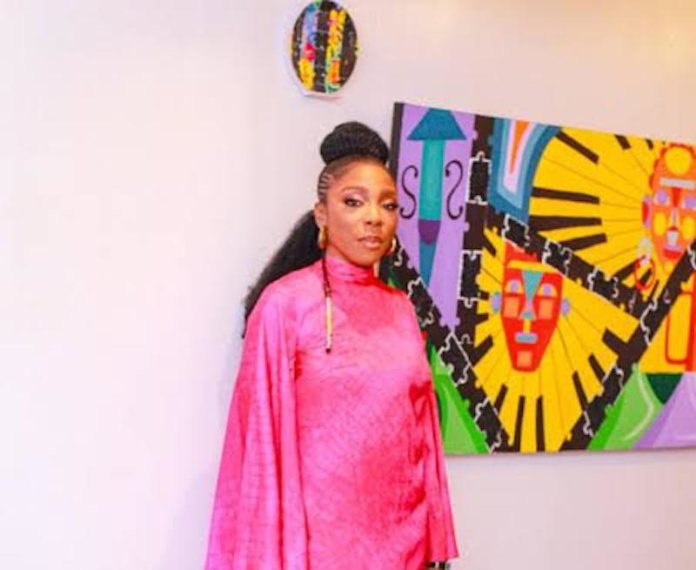 From her mixed bag of talent in visual art, music and engineering, Nissi Ogulu fed the Lagos audience a scoop of spontaneous creativity, says Yinka Olatunbosun

The show itself was not a spontaneous one. After making a debut show in London, January 9 was set for the Lagos exhibition of Nissi Ogulu’s eclectic art collection titled ‘Puzzled.’ The artist had set up a studio within the space at Red Door Gallery in Victoria Island for her live show later that evening. A bagful of brushes, paints, drawing board and other accessories was lying on the floor as journalists walked through the maze of works. The attention-grabbing colours of the large puzzle pieces-shaped paintings are a marked deviation from Ogulu’s earlier paintings on canvas. For her, it’s important to tell the African story with a measure of animation.

As expected, each piece is thought-provoking, creating an imagery of the connectivity of human thoughts. Maybe that should be expected from Nissi, the youngest child from Bose Ogulu, a famous music manager and mother of the grammy-winning Burna Boy. Nissi knows how to bring the three components of her career together in one room.

“Music has always been an inspiration for me in terms of my expression of art in general,’’ said the multi-talented artist who started playing the piano at the age of four and the drums at six. “I think the reason why it is so prominent here is because I went through a phase of self-discovery and in the various collections and exhibitions that I have done. And this one really brings everything together.’’

The whole idea of the live painting session was to give the audience a first-hand experience of the creative process: the thoughtful face, the vision, the passion, the creation and the mistakes.

“You must have an imagination to create something that has never been there before. Sometimes, you pick from here to affect there. Sometimes, I look at my paintings as devices that need to be fixed,’’ she explained.

As one of the team behind the design of one of the latest editions of one of the luxury automobile brands, Nissi is preoccupied with making all the parts of her talent work harmoniously in this show. A series of paintings at the show has the piano and African sculptures as motifs, running side by side with puzzle pieces with the semblance of tire threads or even carbon fibre cloth.

“They are a representation of me. I want to push the narrative to the forefront of conversation, how multifaceted and resourceful we are as a people,’’ she added.

Her words proved true with the caliber of guests that arrived later that evening for the show including her brother, Burna Boy and mother, Bose Ogulu; media personality Ebuka Obi-Uchendu, Ronami Ogulu, DJ Lambo, DJ Caise amongst others.