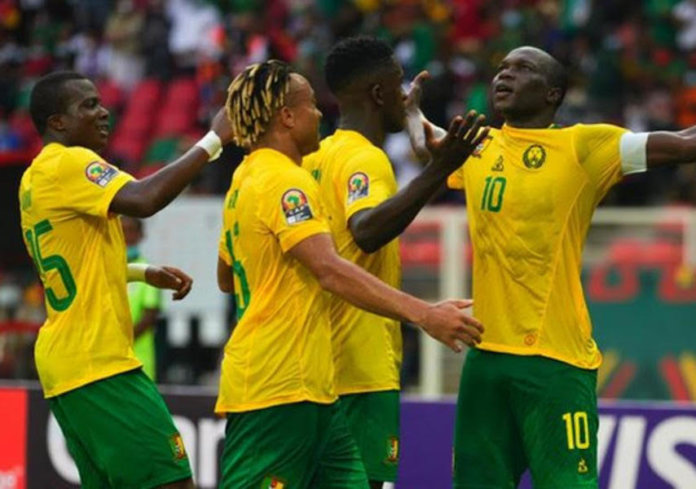 Hosts Cameroon cemented top spot in Group A at the Africa Cup of Nations following a 1-1 draw with Cape Verde on Monday evening.

The Indomitable Lions took the lead when captain Vincent Aboubakar drilled home his fifth goal of the tournament after 39 minutes.

Aboubakar should have won it midway through the second half only to blaze over the bar with the goal gaping.

Unbeaten in their capital since 1988, the result means Cameroon will remain in stronghold Yaounde for their last-16 tie against a third-placed side from Group C, D or E on Monday, 24 January.

Cape Verde finished third in the group on four points, behind Burkina Faso in the table on head-to-head record, and the Blue Sharks face a wait to see if they will progress as one of four best third-placed sides.

With top of the Group D and second round qualification guaranteed , Super Eagles, led by Augustine Eguavoen will aim to complete the rout of all the teams in Garoua and banish the ghost of not been able to win all three matches at the group stage as it was in the previous AFCON participation. Until 2006, Eagles, even if they top their group, it was always at the expense of dropping points. But at Egypt 2006 in Port Said, Nigeria won the three group matches against Ghana 1-0, Zimbabwe 2-0 and Senegal 2-1. Interestingly, it was Eguavoen that led the team to the tournament where Super Eagles won Bronze!

Hosts Cameroon is one of the few teams that have exhibited the strong will to be counted among likely winner of the 2021 tournament. Thanks to their inspirational captain, Vincent Aboubakar who cannot stop scoring and was on the scorers’ sheet again last night in the final Group A match against Cape Verde. With five goals in the kitty, Aboubakar could end up as the tournament’s Highest Goal Scorer and a strong contender for the CAF African Footballer of the Year.

Ahead of the must-win match against Sudan tomorrow, seven-time winners, Egypt will be without their inspirational defender, El-Wensh. The player had suffered an anterior muscle strain.

The 26-year-old defender could not return to the pitch for the second half of the game with Guinea Bissau — which Egypt won 1-0 — on Saturday due to the injury.

“Medical scans have shown that El-Wensh suffers from an anterior muscle strain. He will be missing the game against Sudan in the final match of the AFCON’s group stage,” read a statement issued by the EFA yesterday.

This is not the best moment for Ivorian goalkeeper, Badra Ali Sangare who is said to have learned of the death of his father yesterday, only a few hours after making headlines for a disastrous gaffe in his team’s move in the match against Sierra Leone.

“It is with great sadness that the Ivorian national team learned of the death in the night of 16-17 January of the father of goalkeeper Badra Ali Sangare,” said the Ivorian Football Federation in a statement.

The news comes after team-mate Max-Alain Gradel lost his father on the eve of the tournament.

Gradel appeared to be in tears after scoring in the Ivory Coast’s opening 1-0 win against Equatorial Guinea.

*Ghana’s Date with History as they Play Comoros Today

This will be the first encounter between Ghana and the Comoros at the AFCON tournament as they clash in the final group match tonight. Ghana Black Star have only won one of their last eight Africa Cup of Nations games (D4 L3), failing to score in half of those matches. On the other hand, Comoros could become the fifth team to fail to score a single group stage goal in their debut Africa Cup of Nations tournament, after Burundi (2019), Gabon (1994), Sierra Leone (1994) and Mozambique (1986).