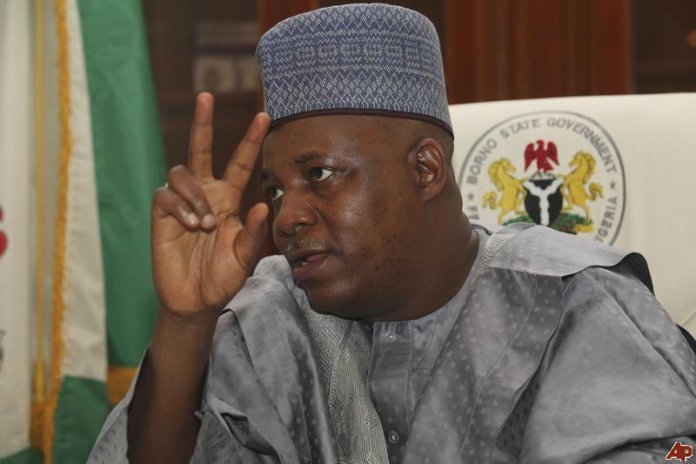 •Maintains age not an issue, presidency not bricklaying

•Insists presidency must return to South

With 13 months to the 2023 presidential election, a former Governor of Borno State and serving senator, Kashim Shettima, yesterday, said the presidency should be zoned to the south. Shettima said a former governor of Lagos State, Bola Tinubu, who recently declared his intention to contest for president in the next election, should be given right of first refusal at the APC primary because of his sacrifices for the party.

The lawmaker, who spoke at a Tinubu Support Group conference, organised by the Support Groups Management Council (SGMC) in Abuja, insisted that Tinubu’s age was not an issue, saying the presidency is not a bricklaying job.

Shettima stated, “In 2015, some aspirants with very huge war chest were itching to cling the ticket of the APC, like the rock of Gibraltar, Asiwaju and his progressive team stood solidly behind the candidacy of President Muhammadu Buhari.

“My simple question, distinguished ladies and gentlemen, where were the new members of what I call ‘The Buhari’s Church of Later Days Saints?’ Where were they? We knew where their political loyalty laid in that particular convention when President Muhammadu emerged as the presidential candidate of the APC. Where were they?

“Some people say everything goes in politics, not everything goes in politics. We shall have minimal thresholds below which we won’t operate and the irreducible minimum is that after eight years of presidency in the north, the logic, common sense, equity, justice and fairness demand that power should move to the southern part of the country and who is better qualified?

“Asiwaju Ahmed Bola Tinubu should be given the choice of first refusal. More than any other person, he has sacrificed more for this democracy, for the APC.”

Shettima added that Tinubu’s credentials were not only appealing, but they were also a proof of the qualities the country needed to redeem its vast potential and possibilities.

He said the mudslinging that had trailed Tinubu’s presidential bid was a mere acknowledgment of his political track record and inimitable influence on the political scene.

According to Shettima, “One of such is the mischievous fixation on his age and the wild conclusions that he’s physically unsuitable for the office of the president. This obsession characterises the thinking of those who have no understanding of Asiwaju’s incredible work ethic.

“Those who seek to make us go low hope to present the presidency as a bricklaying exercise. But that’s the work of a machine created by an idea, and who else is to guide us towards manufacturing the best ideas to redeem this country?

“To derail us at this point is a futile ambition. The conversations we are prepared for aren’t pedestrian obsessions with the mundane, but comparisons of ideas and track records of service to the nation.”

The lawmaker said the future of the country rested on the choice of a unifying leader; a leader, who pandered to neither ethnic nor religious agenda, and one who wasn’t bound by toxic regional solidarity and yet, known for a track record of outstanding leadership.

He said while Tinubu’s political contemporaries were trading their principles for a place at the table in Abuja during former President Olusegun Obasanjo’s era, and throwing their political allies under the bus, he took the risk to build a political alternative to the then ruling party and his choices of candidates underlined his political credentials.

Speaking at the event also, a former Secretary to the Government of the Federation (SGF), Babchir Lawal, said the primary objective of the founders of APC was to build an enduring political party capable of sustaining responsive governance that could bring positive change in the country. Lawal noted that the inability of the party to even harmonise and synergise policy direction of the federal government with that of states it controlled, especially, in key critical areas around which the campaigns were ran, spoke volumes about its incompetence.

Lawal stated: “Compounding these problems in the last one year is the apparent hijacking of the party by a self-serving cabal who, driven by personal ambitions, have failed to organise even simple conflict-free ward, local government, and state congresses, not to talk of a national convention. As we speak, there are only a handful of states in the country that do not have parallel state executives.

“This is the current state of our party and it is in this environment that we gathered here, and must operate to deliver Senator Bola Ahmed Tinubu as the party’s flag bearer at the 2023 presidential election. And this we will do it through consensus, indirect or direct party primaries by the grace of God.”

“We are neither offended nor threatened by whichever method the party chooses to adapt for the emergence of its presidential candidate. But, of course, being democrats, we prefer a method that involves all the card carrying members of the party in this choosing process.”

On his part, Director General, SGMC, Hon. Abdulmumin Jibrin, said the council had to work day and night to streamline the support groups to 2,500. Jibrin said while the campaign had not commenced, the preliminary preparatory activities were to continue to organise the support groups for easy management and to be able to achieve the objectives.

Jubrin urged the support groups to continue their aggressive political mobilisation and the recruitment of people at the state, local government, ward, and unit levels.