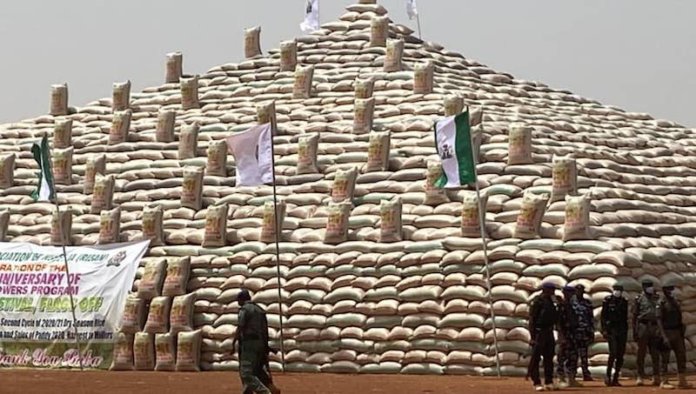 The Anchor Borrowers’ Programme (ABP), an initiative of the Central Bank of Nigeria (CBN), has been described as a major agricultural breakthrough and a source of pride to the country, as rice farmers continue to count gains under the scheme.

To mark the successes recorded under the programme, particularly, in the area of rice cultivation, the Rice Farmers Association of Nigeria (RIFAN), in collaboration with the CBN, would tomorrow unveil the world’s largest rice pyramid in Abuja. President Muhammadu Buhari would unveil the mega pyramid.

Other special guests expected to support the president at the event include the presidents of Benin Republic, Niger Republic, and Chad, as well as governors of Cross River, Ebonyi, Kebbi, Jigawa, Ekiti, and Sokoto states.

RIFAN stated in a publication to announce tomorrow’s programme, “RIFAN will also use the occasion to flag off its 2021 – 2022 Dry Season Farming activities and celebrate the Annual Rice Festival. RIFAN has been the major driver of the rice value chain under the ABP for the past six years. Join us in celebrating rice revolution in Nigeria.

“Let’s celebrate President Muhammadu Buhari’s initiative on food security and self-sufficiency in rice together with the Governor, CBN, Godwin Emefiele.”

Launched by Buhari in 2015, ABP is designed to assist small-scale farmers to increase the production and supply of feedstock to agro-processors with the aim of creating an ecosystem that would link out-growers (smallholders) to local processors. The thrust of ABP is the provision of inputs in kind and cash (for farm labour) to smallholder farmers with a view to boosting the production of rice, maize, poultry, sorghum, cassava, tomatoes, cotton, palm oil, soybean, among others. The idea is to stabilise input supply to agro-processors and address the country’s negative balance of payment on food.
It is also a loan to farmers without collateral and the benefitting farmers are given farm input and cash to cultivate their farms, including the experiment on rice.

According to the structure of the ABP, a farmer who wants to repay his loan can either do so with cash or give the central bank his/her produce of same value, after which officials of CBN’s Development Finance Department would sell and recover the loan.

The programme has increased banks’ finance to the agricultural sector, enhanced capacity utilisation of agricultural firms involved in the production of identified commodities, as well as the productivity and incomes of farmers.

Additionally, there has been a significant reduction in the country’s rice import bill, from a monstrous $1.05 billion prior to November 2015, to the current figure of $18.50 million, annually. The programme has also created an estimated 12.3 million direct and indirect jobs across the different value chains and food belts of the country.

Notwithstanding the disruptions caused by the COVID-19, the challenges of insecurity, among others, the Emefiele-led CBN, in collaboration with some state governments, has continued to encourage rice farmers to cultivate the crop and support the federal government’s quest for food security.