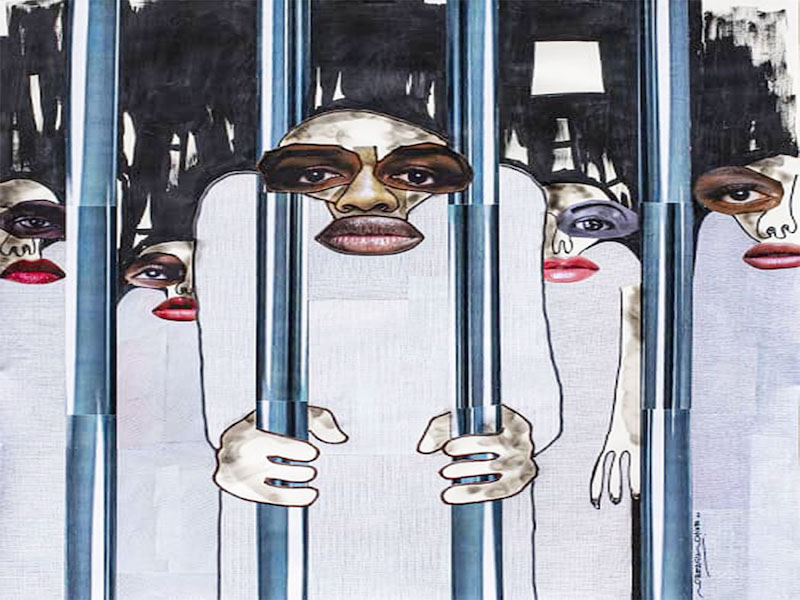 The body of work in the show comprises the artist’s signature cartoon style and other experimented materiality of his adopted paper medium. Cleverly composed paper cut-outs (collage), is predominant, while there were other inventive usages of paper between the colourful magazines and newsprints. The unifying forms in Chike Obeagu’s “paintings” are the exaggerated facial features of the eyes and mouths, which for me insinuates the idea of sights and sounds as the undercurrents of modern-day culture. The eyes take in moments just like digital devices of today’s society capture images into the virtual world where they come together as content. But it becomes more interesting when such materials are at the disposal of an inventive artist of Chike’s virtuosity. The results are the tempered texts, images and “sounds” of his paintings speaking vociferously, both individually and collectively while presenting to the viewer what appears like extracted stills from a 21st-century reel of the Nigerian society.

Chike Obeagu, a painting lecturer at the Federal University, Lafia, Nasarawa State, had his formal art training in two of Nigeria’s prominent tertiary institutions: University of Nigeria, Nsukka (UNN), where he had his BA and an MFA in painting between the late 1990s and early 2000s and the Ahmadu Bello University, Zaria, where he obtained a doctorate in Fine Art with a specialisation in painting.

Cogitations, the title of his current exhibition, is also a direct reference to Obeagu’s abiding predilection for deep contemplation as a fulcrum of his studio practice. From his years in art school, he had cultivated the art of measured temperament, often weighing the impact of how his message is delivered. In bringing this sensibility to bear on the expression of his messages, works soaked in social commentaries emerge, wrapped in humour and clean canvases in a way that lighten their seriousness. This makes for ease in connecting with his audiences of diverse inclinations.

An example of the artist’s skilfully-veiled allusions is his work titled “Private View”. This is a work about art aficionados engaging in the elitist past-time of art appreciation in an art gallery, but in a deeper context, “Private View” is about audience segregation which has become a normalised practice among art galleries in Nigeria. The entrenchment of private viewing during art exhibitions, in contrast to the open viewing experience, is a metaphor which the artist has employed to speak about the layers of structured segregation that exist in the various strata of society such as economic, religious, and even in cultural spaces like museums and galleries. He views this type of institutional privilege as part of the bane of human existence.

In another work titled “Peaceful Demonstration”, the artist uses his trademark visual pun, as the scene before the viewer is anything but peaceful. A crowd of men clutching dangerous weapons like clubs, half-broken bottles and knives are engaged in a free-for-all fight. This work may be alluding to the EndSARS protest, which rocked Nigeria to a standstill in October 2020. While the most perceptible aspect of that protest for most people is the violent nature of police and military engagement with the unarmed protesters, Chike’s work instead captures the bizarre scene of factional protesters locking horns without the police in the picture. In recent years this scenario has become common during most anti-establishment protests. Except for the slight suggestion of a military boot stepping on a fallen protester, there is, strangely, no sign of law-enforcement. “Peaceful Demonstration” re-echoes how it is that the tragedy of oppression turns the oppressed against each other.

Other works featured in the exhibition include “We Are Still Waiting” (mixed-media drawing, 72x123cm, 2021), “Freedom Is Coming Tomorrow” (mixed-media drawing, 92x123cm, 2021), “Action and Reaction,” (diptych, paper and fabric offcuts on canvas, panel 1: 122x122cm, panel 2: 122x128cm, 2016), “Urinate Here by Order” (mixed-media drawing 122x122cm, 2018). While the works “We Are Still Waiting” and “Freedom Is Coming Tomorrow,” are among some of Obeagu’s direct social commentaries, he talks about the crisis of ‘awaiting trial’ in the Nigerian correctional facilities, and the failure of leaders to deliver on their unending promises, at the same time obfuscating or obliterating extant laws as succinctly captured in the work “Urinate Here by Order”. The work “Action and Reaction” is about how commentaries depending on its temperament elicit equal response in the complex and sometimes tense sociocultural and socio-political sphere in Nigeria.

Through his exploration of everyday experiences under the themes of family, religion, society, family, kinship and power play, the artist will no doubt continue to push the boundaries of his creativity especially in how he portrays the objective realities around him. This, in addition to the materiality and formal style of his genre, will keep giving him an edge a unique voice, even beyond Nigeria, earning him well-deserved accolades.