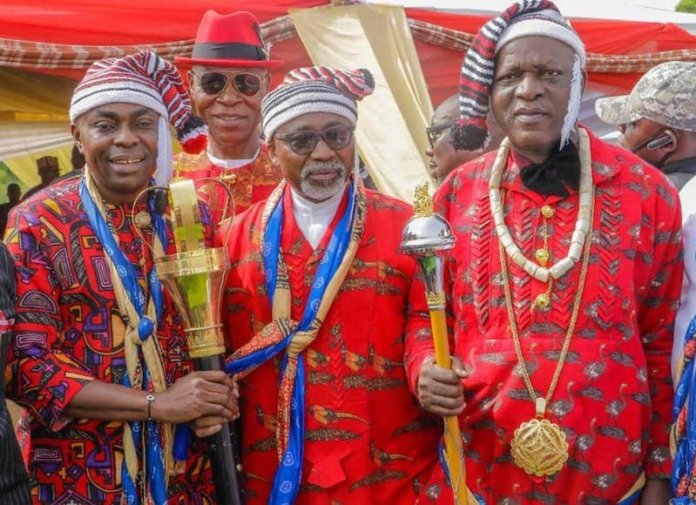 The Abiriba Ancient Kingdom was agog penultimate Saturday as a new set of titled chiefs were added to the impressive list of Council of Titled Chiefs.

The conferment of chieftaincy titles was the climax of the 21st traditional coronation anniversary of HRM Eze Kalu Kalu Ogbu IV, the Enachioken of Abiriba Kingdom.

Aside the coronation anniversary, the paramount ruler also added his 30th marriage anniversary and call to the Nigerian Bar in the celebration package, hence the gaiety of the occasion was triple charged.

From the Ndi Oko Ogo Palace of the paramount ruler where the chietaincy titles were conferred on the deserving recipients to the Abiriba mini stadium where the other components of the triple celebration took place, it was a colourful carnival laced with the grandiose exhibition of culture and opulence.

Among the throng of 51 new titled chiefs were the Deputy Governor of Abia State, Ude Oko Chukwu(Ikirike Oku); Senate Minority Leader, Senator Enyinnaya Abaribe(Aturu Mang); House of Representatives member, representing Arochukwu/Ohafia federal constituency, Hon Uko Nkole(Nkuma Ala Iyi); and Abia State Commissioner for Trade and Investment, John Okiyi Kalu, who got the title of Nwandugbom.
The new titled chiefs were selected from within and beyond Abiriba Kingdom with diverse professional callings and accomplishments. But a common criteria was used to qualify them.

According to the chairman of of the Anniversary Committee, George Ezikpe Okiyi, the recipients of the traditional title of recognition “have in different ways and means made individual and collective efforts that served and promoted the overall good and development of Abiriba community in particular and/or the larger society in general.

“The recognition is without doubt, an acknowledgement and appreciation of such noble efforts that are worthy of emulation.”

Abia State Governor, Dr Okezie Ikpeazu, who was a special guest of honour and also a titled chief of Abiriba Kingdom (Otuba Okwojie), used the occasion to solicit the support of traditional rulers to enhance security across the state.

The governor, who was represented by a prominent businessman, Chief Okey Ahaiwe noted that security “is a collective responsibility”, hence the need for royal fathers to join hands with his administration in the quest for sustainable security in the state.

He lauded the Enachioken of Abariba and members of his Council for the peace and development in Abariba. Ikpeazu, therefore, urged other traditional rulers to emulate the Enachioken and his council members who strive daily to set up and sustain structures to protect the Abiriba Kingdom as well as ensure peace with neighboring communities.

“On our part, we will continue to support peaceful communities in the state with development projects and I am also aware of the efforts being made by the people of Abiriba to support our developmental strides through self-help.

“I applaud the commitment of the people of Abiriba Kingdom, their hard-work and spirit of enterprise wherever found and will continue to partner with them to achieve our common goals of rapid development within a secure and peaceful environment”, Governor Ikpeazu said.

Eze Kalu Ogbu expressed his gratefulness to the Abia Governor for ensuring that the state remains one of the most peaceful in the country ans also praised him for his giant strides in the development of the state.

“Our people appreciate the love Governor Ikpeazu has shown us particularly with the completion of the first phase of Abiriba ring road along Ugwuezi road Abiriba, provision of street lights in our community, classroom blocks and appointment of teachers to man our schools,” he said.

With their names now listed among the Council of Abiriba Council of Titled Chiefs, which dates back to 1472, the new chiefs now live with sense of fulfilment that their contributions have been recognised and appreciated.

Though Abiriba Kingdom prides itself as “an achievement oriented society where warriors and heroes are born” it was in 1960 that formal conferment of chietaincy titles on deserving individuals was started by the then Enachioken, Eze Ikpe Mba Oko. It was a historical event as Chief Echeme Emole was conferred with the title of Eze Udo of Abiriba.

Ever since, successive paramount rulers of Abiriba had followed the tradition of conferring chiefaincy titles on deserving Abiriba indigenes and friends of the Kingdom in recognition of their various contributions.

However, it was when the incumbent Enachioken mounted the stool of his forefathers that he constituted the Abiriba Council of Titled Chiefs. There are 69 names on the list since 1960 in addition to the new chiefs that would now swell the number.
One of the new chiefs, Chief Okiyi Kalu said that being a titled chief of the Abiriba Kingdom is highly valued because “the highest honour an Abariba man or woman can receive is the one from the Enachioken”.

“It is worth more than being the president of the world,” he enthused, adding that with his new status he would continue to do more of those things that qualified him to be honoured by his own people.