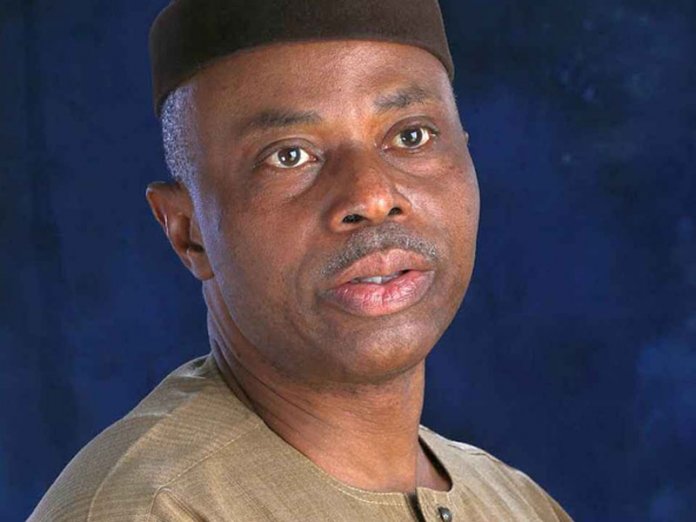 The battle for who controls the Peoples Democratic Party (PDP) in Ondo State has continued to gather momentum as the state former Governor, Dr. Olusegun Mimiko, was yesterday dragged to court over his status as the leader of the party.

This is coming barely three months after Mimiko, a two term governor, dumped the Zenith Labour Party (ZLP) when four governors of the PDP visited him at his house in Ondo town, Ondo West Local Government Area of the state.

Not satisfied with the development, a member of the party and Coordinator of Peoples Democratic Party Support Group (PSG), Mr. Bode Obanla, filed a suit at the state High Court to bar the former governor from assuming the leadership of the party having dumped the party when members needed him to lead it.

Obanla, before Mimiko’s defection, had vowed to take legal action against the former governor, explaining that: “It is a measure to strengthen our democracy in the face of nomadic politicians, whose conscience is so fluid that they can be found in a political party in the morning and change to another by the evening of the same day. Interestingly, the 2017 PDP Constitution (as amended) envisaged situations of this nature and had made adequate provisions.”

Through his counsel, Messrs Kalu Agu and Oladimeji Oyesusi, the claimant sought a declaration that Mimiko, by virtue of Chapter Two Article 17 of the Constitution of the PDP as amended, is an ordinary member of the party.

In his claim before the court, Obanla sought for “a declaration that Mimiko is not entitled to be accorded the seniority and privileges attendant to his status as a former governor in his membership of Ward Executive Committee, Local Government Executive Committee, State Executive Committee and the National Caucus in that he was not a governor produced by the PDP not having won any governorship election on the party platform.”

Specifically, he sought for an “order of perpetual injunction restraining Mimiko from holding out himself or parading himself as a member of the National Executive Committee (NEC) of the PDP as established in Chapter Four Article 13 (1) and 31(1) (w) of the Constitution of the PDP.”

Also, he prayed for “an order of perpetual injunction restraining Ayu, NWC and Adams from granting Mimiko the seniority and privileges attendant to the status of a former governor produced by the PDP, as provided in the Constitution of the PDP and in particular from being a member of the National Executive Committee of the party established in Chapter 4 Article 13 of the Constitution of the party.”

Obanla’s position is that Mimiko on December 8, 2006, abandoned his post as the Minister for Housing, Lands and Urban Development in the government of President Olusegun Obasanjo, resigned from the PDP, and decamped to Labour Party (LP), upon which he contested for the governorship seat of the state and won.

According to him, Mimiko won the second tenure on the platform of the LP, but towards the end of his second tenure decamped to PDP. He said Mimiko also decamped from PDP in 2017 to ZLP through which he contested the senatorial election in 2019 general elections. He said Mimiko who had not contested election on the PDP platform cannot rejoin the party and assume the position of a leader in the party.

However, the court has not fixed a date for the hearing of the suit.

Meanwhile, the state PDP has disowned Obanla, saying it received the purported court action as a rude shock.

PDP through its state Publicity Secretary, Kennedy Peretei, said: “Mimiko, a two-term governor of Ondo State, is not only a senior citizen in the state but in Nigeria at large. His return to the PDP was orchestrated by four governors elected on the platform of our great party under the leadership of Alhaji Aminu Tambuwal, the governor of Sokoto State, and chairman, PDP Governors’ Forum.

“The State Working Committee wishes to state unequivocally that the action of Obanla is a great embarrassment to the party, and that necessary actions will be taken in due course.

“At a time when all hands are on deck to rescue and rebuild Ondo State and Nigeria, Obanla’s action is a mere distraction that should be treated as such.”