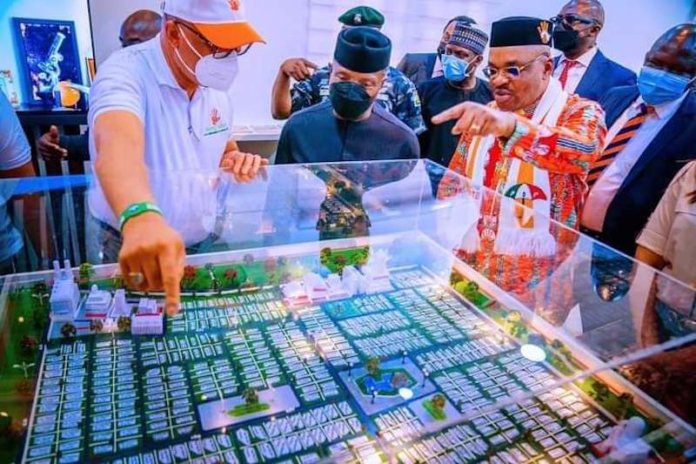 Past and present leaders of Akwa Ibom State invested and continued to invest heavily on infrastructure in order to put the state in good stead with other states in terms of development indices. At the inception of his administration in 2015, Governor Udom Emmanuel keyed into the vision and dreams of the founders of Akwa Ibom, which was created on September 23, 1987, by former Military President Ibrahim Babangida.

The Completion Agenda of Governor Udom is the magic wand as every sector in the state now has a facelift. Udom, whose body language clearly shows that he understands where the state should be in terms of housing, is not leaving any stone unturned. The governor is investing huge funds into the state’s housing sector as it has the capacity to stimulate economic growth.

As part of activities to mark the 23 years of Akwa Ibom’s creation, Vice President Yemi Osinbajo was in the state last month to inaugurate some signature projects completed by Udom. While inaugurating a 21 storey building, the Dakkada Tower in Uyo the state capital built by Udom’s government, the Vice President revealed that the federal government in the past six years sunk over N8.9 trillion in the infrastructural development of the country.

Osinbajo who commended Udom for his leadership qualities, recalled how the governor in 2015 informed all that cared to listen about his vision to construct the tallest building in the South-south and South-east region in the state, which the Vice President said has become a reality today.

“Today, I feel with joy and pride to witness the realisation of that dream to celebrate a commitment to excellence and vision represented in this 21 storey building.

“But this building is not just the tallest in the south-south, south-east regions. It is certainly the latest in Nigeria and West Africa.

“By the completion of the Dakkada Tower, it will definitely address the paucity of the world class office accommodation for both local and corporate international companies especially oil and gas companies.

“With this development the big players in corporate Nigeria especially in the oil and gas industry should find it entirely auspicious to relocate their administrative headquarters to Uyo.

“This Tower is a-state-of-the-art smart building combining architectural beauty with the latest technology developed for efficient and smart work place.

“I am very proud of what my brother, governor Udom Emmanuel of Akwa Ibom State has achieved in his six years of stewardship as governor of this state especially with his industrialisation agenda.

“Your focus on infrastructure development is significantly at one with the centerpiece of the federal government agenda,” Osinbajo stated.

Osinbajo, who chairs the Economic Management Team (EMT), called on investors to invest in Akwa Ibom where the federal government has come up with policies and programmes to make it an investment destination.

“As of last year we have expended over N8.9 trillion on infrastructure. Just last month the Federal Executive Council approved the Lagos-Calabar rail station which will pass through Uyo.

“The council approved a full business scale for the Ibom Deep Seaport. It was a very active demand from the governor of the state,” he said.

An obviously elated Udom said he was excited with the inauguration of the project. “Everything we do is a vision of what we want to break into.

“There were a lot of people when we started this project, they said this building will be completed.

“Today we are presenting to the Akwa Ibom People, Nigeria and the world the smartest, most intelligent building Nigeria can boast of,” the governor said.

Osinbajo, who also flagged-off a 557 Dakkada Luxury Estate said housing projects were very critical in creating jobs aside from providing shelter. The Vice President said the housing estate would be “a nice little place where one can hide away,” adding, “The Dakadda Luxury Estate is strategic, people across the country will want to come here, and when they come they will have a decent accommodation to raise their children. The facilities here would meet the needs of residents and meet their standard of what should be a home.”

Udom, who said that the luxury estate project was driven by housing demand from foreign investors, noted that 13 per cent of the estate had already been sold out.

“We are having pressure on accommodation. We are having an influx of foreigners who are looking for where to build houses. We had to create a new estate that will be friendly to all.”

“As we are standing here, 13 per cent of the estate has been sold out to non-indigenes. Everything that a luxury estate should have is here. The water here is WHO standard. The power supply will come from two sources; we are bringing in a gas turbine that will generate 15MW of electricity,” he said.

On his part, the state Commissioner for Lands and Water Resources, Pastor Umo Eno, whose ministry supervises the Dakkada Luxury Estate project said the estate is designed such that residents can tele-work. According to him, the estate was part of the full plan by the governor to ensure smart living for investors coming into the state.

The commissioner who said that enquiries about the estate will happen at the experience office, called on real estate investors to look up to the estate as a “place of peace and quiet,” adding that each plot in the estate in average of 2,000sqm, each square meter would be sold for N30,000.

“The governor is the enabler of the positive things that the government is doing. Akwa Ibom is ready for foreign direct investments.

“It’s the first mass city luxury estate that is developed by the state government and the governor has the vision to make it a home away from home. It’s just 557 plots, it’s a low density housing estate but the difference in this one is that it has all the facilities including the internet facility, MTN is having the contract to run all the fibre optics, you have the sewage central system, central water and treatment plant, police station, school. Everything is right inside the estate.

It’s just a city within a city. The houses are not going to be the same, the fence will not be high but there will be other specifications to keep the ambience of the environment, some areas will be bungalows, some will be one floor and two floors.

“It’s also designed to be a tourist attraction, on the roads we are lining it up with fruit trees, what the governor envisaged is that you are going to have Apple Street, you know that you can get apples there so that wherever you are that signifies a particular fruit. It’s a modern environment, it’s luxurious, this one you have 24 months build sale and we refund your money. You see, it’s part of government proving houses and it’s close to the airport typical of what you have in Abuja or Lagos. There will be security control and it’s going to be a very well secured estate,” Eno said.

According to the commissioner, the Dakkada Luxury Estate will also have a church, shopping mall, clinic and health centre, a civic centre as well as a central gas supply.

Going by Udom’s development drive which is anchored on his administration’s Completion Agenda, the housing deficit in Akwa Ibom may soon become a thing of the past as many housing estates are now springing up in all the nooks and crannies of the state.