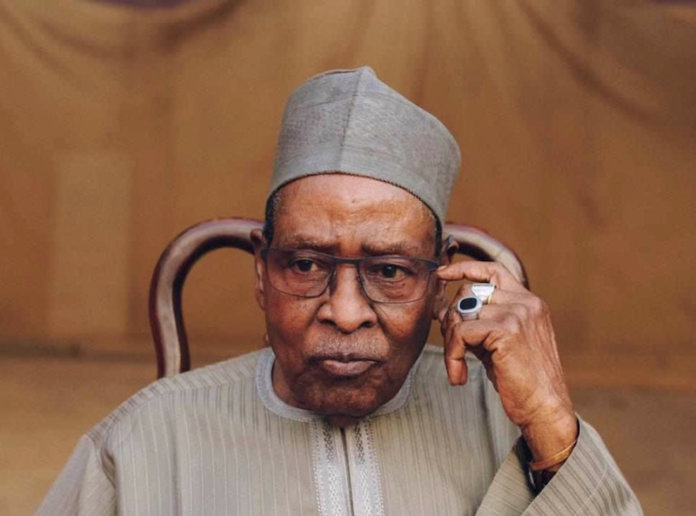 Buhari, in a release by his spokesman, Garba Shehu, said, “General Wushishi had a distinguished military career and we are proud of his impressive service to the country.General Wushishi was an epitome of discipline and dedication to service, and he was a role model for both the officers and the rank and file.”
The president, however, extended his condolences to the family of the deceased, the Nigerian Army, as well as the government and people of Niger State.

On his part, Obasanjo, who expressed shock over Wushishi’s passing in a release by hisSpecial Assistant on Media, Kehinde Akinyemi, extolled the virtues of the late Chief of Army Staff, which included building an efficient and effective Army.

Obasanjo, who was in Gambia monitoring the presidential election in his capacity as the Chairman of the Commonwealth Election Observers Mission, said, “late Lt-Gen Wushishi had a distinguished career in the Nigerian Armed Forces which he joined in 1961.

“There is no doubt that the whole nation and in particular the Nigerian Armed Forces would deeply mourn the passing of this outstanding soldier, a patriotic Nigerian and a humane gentleman. We are comforted by the fact that throughout his lifetime, he achieved so much for the country and attained the peak of his chosen career through diligence, hard work and dedication to professionalism.

“In and out of service, he showed humility and love for his colleagues and the nation and contributed to national development as a private businessman and a provider of employment for many of our people. Little wonder therefore that his efforts were rewarded with the revered national honour of Grand Commander of the Order of the Niger, GCON.

“It is unfortunate that the country has lost Lt-Gen. Wushishi (rtd.) at a time it still expected to reap from his wide experience. We pray Allah to grant the soul of Lt-Gen. Wushishi a peaceful rest, and the family, the good people of Niger State and the entire nation the courage to bear the irreparable loss,” Obasanjo said.

Atiku, who also mourned Justice Bolarinwa Babalakin, in a press release by his media office, said the death of the two great Nigerians one day apart was a great loss to the country.

He describes the late legal luminary, Babalakin, as someone who contributed immensely to the law profession in Nigeria, both at the Bar and Bench, and remarked that “the legacies he left behind will remain indelible for a long time to come.”
On Wushishi, he said he had an outstanding military career, lived a worthy life and carried himself with dignity as an ambassador and icon of the great people of Wushishi in Niger State.

The Arewa Consultative Forum (ACF), while mourning Wushishi (rtd), in a statement by its spokesman, Emmanuel Yawe, lamented that with his death, “the number of those, who selflessly sacrificed their lives to keep Nigeria one is fast depleting.
“We woke up this morning in the ACF family with the sad news that one of the founding fathers of our forum, General Inuwa Wushihi died yesterday night (Saturday in London). General Wushishi is considered a pillar of strength in the ACF, because of his love and services for the north, for Nigeria and for humanity generally”.

The ACF said Wushishi was “a gallant officer, who received good military training both in Nigeria and abroad, rose to the rank of Lietenant General on merit and was appointed Chief of Army Staff by President Shehu Shagari in 1981, an office he held untill the end of that government in 1983.”

Describing him as a detribised Nigerian and an unwavering believer in democracy, ACF said, “In retirement, he devoted himself to noble causes for the unity and progress of Nigeria. One of such causes is the ACF, which he played a prominent role in putting together in its early years about twenty years ago.

Minister of Defence, Maj Gen Bashir Magashi (rtd), at the weekend, also said the death of the second republic army chief, who served from 1981 to 1983, was a big loss to the armed forces in particular and the nation at large.
A statement by the minister’s office, condoled with the immediate and extended families of the late Gen Wushishi, urging them “to take solace in the Almighty Allah, who giveth and taketh at the appointed time and place which he said is beyond human control”.

According to him, “The fact that he lived a fulfilled life in service to God and country were enough consolation to return absolute thanks to Almighty Allah by saying Alhamdulilahi”.