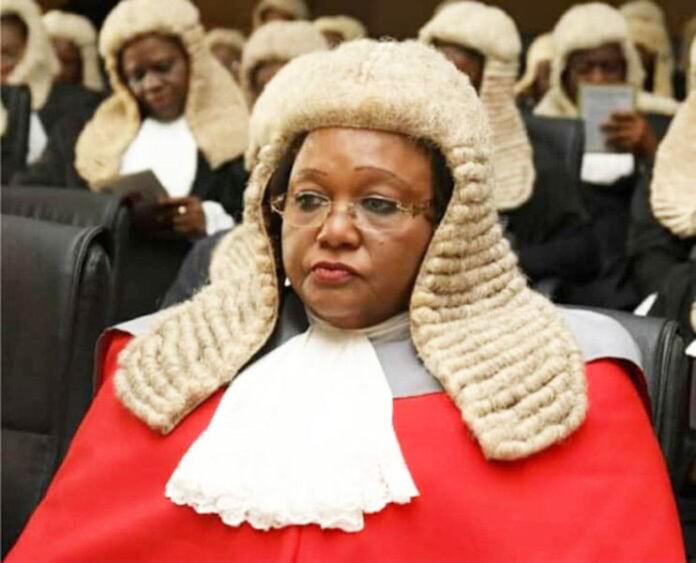 While the federal and Lagos State governments have faulted the report of the Lagos State Judicial Panel of Inquiry and Restitution on Lekki Toll Gate Shooting Incident and Cases of Police Brutality, Ejiofor Alike writes that one important fact they may have overlooked is the competence, courage and integrity of the Chairman of the panel, Justice Doris Tami Okuwobi

In Nigeria, it is quite unusual to see a panel set up by a government, indicting the same government at the end of its sitting. Many think that it takes extraordinary courage and integrity to do that. This is exactly what the Justice Doris Okuwobi-led Judicial Panel of Inquiry and Restitution on Lekki Toll Gate Shooting Incident and Cases of Police Brutality, constituted by Lagos State Governor, Babajide Sanwo-Olu, last year did recently when it submitted its report.

Since the report was submitted on November 15, 2021, Justice Okuwobi has been celebrated not because she did the very difficult assignment, but because as the chairman of the panel, the outcome of the report is a reflection and clear testimony of the sterner stuff she is made of.

She could have compromised or succumbed to pressure, or tactically influenced others to follow suit, but she refused to toe that denigrating path.

Though there are other eminent people of integrity such as a former Deputy Inspector General of Police, Mr. Taiwo Lakanu (rtd); respected human rights lawyer, Mr. Ebun-Olu Adegboruwa (SAN); Director of Citizens Mediation Centre in the Lagos State Ministry of Justice, Mrs. Oluwatoyin Odusanya, the chairman of the panel set a standard, providing the moral compass that other equally men and women of integrity in the panel followed religiously.

Justice Okuwobi-led panel, which showed doggedness and courage in action had sat for well over one year, listening to testimonies of aggrieved petitioners, their witnesses, forensic experts and lawyers.

Those who know Justice Okuwobi closely feel that the courage and integrity with which she discharged her job was not limited to the panel, as she equally displayed these qualities all through her career as a private practitioner, civil servant and on the bench.

The panel, judging by the submission of the chairman, had divided its assignment and report into two principal segments to comprehensively capture and cover general cases of police abuses and the special case of the Lekki Toll Gate incident.

Expectedly, the startling revelations in the report have received massive reactions from the Nigerian public as well as the international community who had waited patiently for the outcome of the panel’s report.

Those indicted in the report, particularly the Army, police and Lekki Concession Company (LCC) seem to be uneasy.

In the face of all denials by the Army, police and LCC that innocent lives were wasted at the Lekki Toll Gate on October 20, last year, the panel’s findings revealed the truth about what really happened at the “massacre ground,” contradicting the blatant denial by the federal and Lagos State government that no deadly force was used against the peaceful protesters.

All attempts to cover-up evidence of the shocking, abominable horror at the Lekki killing field were unmasked by the Justice Okuwobi-led panel.

The courageous panel had listed desperate measures taken by the soldiers, police and officials of the government to cover up evidence of the alleged massacre. There were several chilling shockers revealed in the report. For instance, it noted that the soldiers “removed many bodies and corpses of fallen protesters which they took away in their vans.”

Another shocker was: “One of the protesters who was shot and taken for dead, Olalekan Sanusi, who eventually escaped to narrate his ordeal and experience, stated that 11 corpses were in the van, where he was placed in and presumed dead.”

“Immediately after the protest, there was palpable fear that the Army and Police were visiting hospitals to ‘finish up’ the protesters to the extent that some of them could not return home immediately. Some of the protesters received threats and some were being trailed by unknown persons.”

Most commentators have noted that the submission of the findings of the judicial panel would accelerate the process of justice and accountability if the government will treat the recommendations of the report with absolute sincerity.

Though officials of the federal and state governments have publicly or clandestinely condemned and disparaged the report, many know that it is not unexpected.

What Nigerians want to see going forward is the full implementation of the recommendations to the letter.

President Muhammadu Buhari had promised to speak on the issue as soon as the Lagos State government White Paper is out.

Though the Lagos State Government has released the White Paper where it accepted 11 of the 32 recommendations by the panel, it rejected the report of nine deaths.

Despite this disagreement, the panel has made its point, with the chairman and other members standing tall.

The eminent retired judge started her professional career with private practice and later worked as a legal practitioner with the chambers of Kehinde Sofola & Co in Lagos State from 1978-1979, after she bagged her LLB (Hons) at the University of Lagos in 1976 and her BL (Barrister-at-Law) certificate from Nigerian Law School, Lagos in 1977. As she moved to the Lagos State Ministry of Justice as a State Counsel, she rose through the ranks to position of the Solicitor General and Permanent Secretary from 1996 –1998. Her Lordship was appointed a judge of the Lagos State Judiciary on September 17, 1998 and has worked in virtually all the High Court divisions in the performance of her judicial functions.

During her time in service, she had handled huge special responsibilities under the judiciary for which she did well including; being the representative of the Chief Judge on the “Integrity Committee” (2002 – 2004), Member, Public Complaints Committee (2004-2006), Probate Judge (2006 – 2008), member, Election Petitions Tribunal in Ekiti, Ogun, Bauchi and Anambra State Panels (2007-2009), Administrative Judge, Ikeja and Lagos Divisions of the High Court, 2016.

For her, she has done her job the best way she could and acquitted herself. The ball is now in the court of the governments, civil society organisations and the victims to take it to the next level.