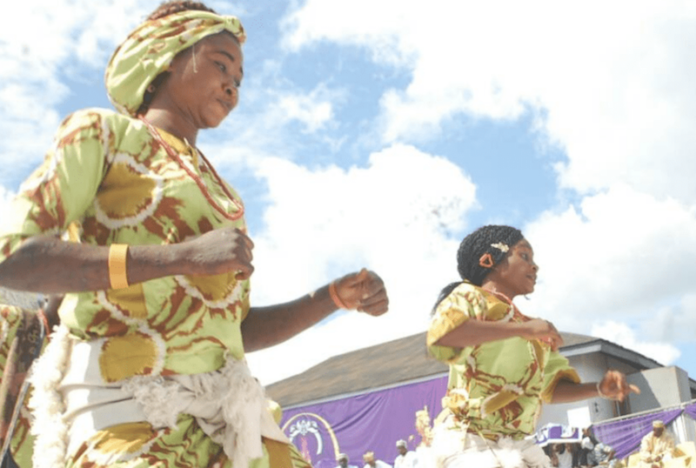 The Olojo festival which is over a century old hinges on the remembrance of “Ogun, God of Iron,” who is believed to be the first son of Oduduwa, progenitor of the Yoruba people. Celebrated annually by the people of Ife, the festival name ‘Olojo’ means ‘the day of the first dawn’ but in the history of Ile-Ife, the Olojo Festival is to mark the day the Almighty created the earth.

On the day of the festival, the Ooni of Ife appears after seven days of seclusion without food, speaking to the ancestors and praying for the people of Ile-Ife. This is to make him pure and ensure the efficacy of his prayers. Before the Ooni emerges, women from his maternal and paternal families sweep the Palace, symbolically ridding it of evil. The Ooni later appears in public with the ‘Are’ crown, which is believed to be the original crown used by Oduduwa in leading a procession of traditional Chiefs and Priests to perform at the Shrine of Ogun.

Over the years, the Olojo festival has remained popular in Ile-Ife because of its rich history and cultural symbolism; connoting the day in the year which was blessed by Olodumare. Olojo can also be translated as the “Owner for the day”. Prayers are offered for peace and tranquility in Yoruba and Nigeria. With no age barriers, the festival unites the people of Ile-Ife, known as the cradle of the Yorubas, the city of survivors, the spiritual seat of the Yorubas, and the land of the ancients.

While reflecting on the importance of the Olojo festival, the Ooni of Ife, Oba Adeyeye Enitan Ogunwusi, Ojaja II says “Olojo is the celebration of God Almighty. It is a way of our culture, our tradition and our heritage. That is the reason why it’s a celebration for the entire black race all over the world. It is the pride of the entire black race; not only the people of Ife, Osun State, not only Nigerians. It is the celebration of black people all over the world.”

On MTN’s dedication to the promotion of cultural activities in grassroots communities, the Chief Sales and Distribution Officer of MTN, Adekunle Adebiyi said: “We decided to be a part of this colourful festival to promote the rich culture in Ile-Ife and connect members of the community effortlessly.” Kulture Fest has become a leading platform by a Nigerian corporate, dedicated to showcasing the rich Nigerian culture through cultural festivals. Under the Kulture Fest initiative, MTN Nigeria sponsored Ilorin’s rejuvenated Durbar Festival in 2018. The century-old festival which took place in the state of harmony is a celebration that involves prayers, a parade by the Emir and his entourage as well as accompanying music.

Another festival worthy of note supported by the telecommunication giant is the fourth edition of the African Drum Festival. A three-day festival held in Ogun State and designed to bring together participants from across the world to showcase the rich cultures of the different ethnic groups through dance, exhibitions, music and drums.

MTN Nigeria also supported the Diwali Festival of Lights in 2019 at Tafawa Balewa Square in Lagos. Diwali, which means an array of lights, is the most important festival celebrated in India and symbolizes the victory of good over evil.

The telco has been pushing the promotion of these festivals and more with its Kulture Fest initiative which is borne out of the desire to preserve and project the country’s rich cultural heritage. MTN Nigeria aims to put various cultural festivals in the country on the international pedestal and galvanise their potential to generate revenue for the communities and engender communal bonding.

“Kulture Fest is a major investment for us. We’ve been supporting festivals for over a decade now as we seek to promote culture and create affinity between the people of Nigerian communities and the MTN brand. We are picking 37 festivals across the country this year and I believe that by next year the number will increase,” Adebiyi said.

Through its Kulture Fest initiative, the telecommunication company has been well involved in the success of major festivals such as Osun Osogbo, Ofala Nnewi, Argungun, Anioma, among other festivals across the country. The telco’s consistent support of Nigerian art and culture is laudable and should be emulated by other stakeholders in the private sector.