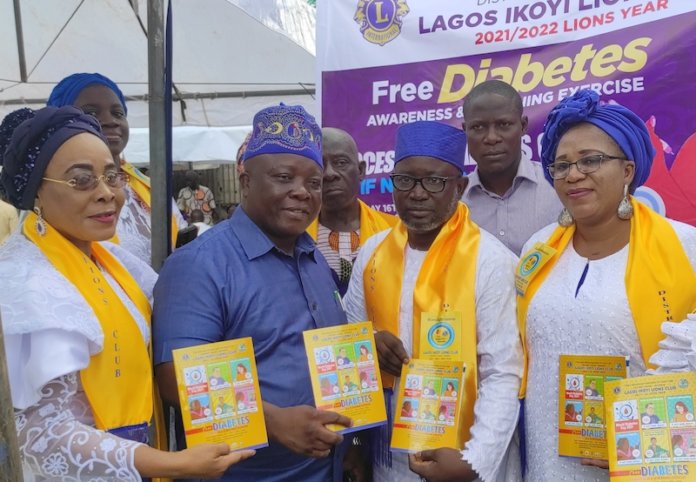 Held in commemoration of the World Diabetes Day, 2021, the Lagos Ikoyi Lions Club recently embarked on a “Free Diabetes Awareness and Screening Exercise”, aimed at promoting early detection thereby encouraging the local community to be aware of the symptoms and side effects of diabetes.

The event which took place at the newly commissioned Anikantamo Public Health Centre, Adeniji Adele, Lagos, had a large turnout of members of the community who were all attended to one after the other.

Speaking on what informed the choice of the area in which the exercise was carried out, President, Lagos Ikoyi Lions Club, Lion Abdulkarim Yusuf said the Executive Chairman of the Lagos Island East Local Council Development Area, Hon. Muibi Alade Folawiyo had approached the club to provide community service in line with the commissioning of the new health care centre in the community, adding, “we are grateful we responded to his request and here we are today”.

Yusuf, who noted further that over 250 persons were attended to during the exercise, advised Nigerians to watch what they eat, try as much as possible to eat healthy, live healthy and do more of exercises as well as take good care of themselves generally.

Chairperson for the awareness event, Lion Stella Busari who said the club champions kindness in every community and therefore actively works to improve the lives of people, noted that Diabetes disease has reached an alarming proportion in the world, that it is now regarded as one of the major causes of deaths in the globe.

She noted, “A lot of us go about being diabetic without realising that we are time bombs waiting to explode.

Diabetes does not drop from the sky into our body systems. It is caused by our attitude to the healthy nature of the things we eat and drink and our careless attitude to visiting the health experts on time when we begin to feel that our bodies are not functioning properly”, she said further.

Busari lamented the lack of awareness on diabetes in today’s society adding further that Diabetes leads to the failure of many organs of the body like the heart, eyes, kidney and so on.

She therefore maintained that early detection of Diabetes “could save us from this scourge which should in fact be declared a pandemic by WHO”.

She noted further that the aim of the exercise was to create awareness in the community by carrying out simple tests on individuals to determine their status in regards to their sugar blood level.

Expressing the hope that the modest contribution made by the Lagos Ikoyi Lions Club will go a long way in creating the needed awareness, the chairperson revealed further that those found to have high blood sugar level will be advised to see their doctors immediately to take remedial action.