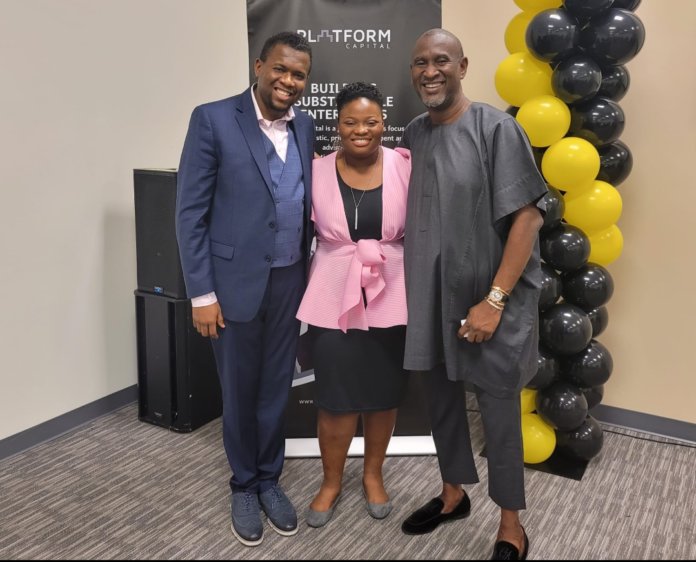 Chaste Padman is a rare writer whose love for the girl child and her advancement in life is undiluted. He details the voyage into his latest publication, The Period Passport, a widely recommended self-help book that connects fathers and daughters on better period management.

Now, according to a reviewer, Padman’s book is extraordinary for another reason. The author lives in Harrisburg with his spouse, Roxanne Stewart — a Banker, Photographer and Publisher — and he is excited for the book to be out in the world that’s dragging ‘Men into Menstruation’ discussions amidst the danger of a single story with gender equality.

With this book, the author takes the reader deep into the heart of his own obsession with period poverty, radical writings on Devoted Hollywood Dads, Glamorous Grandma and Period Genie. The highly informative book, which covers all aspects of menstrual period in girls and women, was co-written by Yetunde Oluwafunmilayo Tola, a registered nurse and midwife based in Hong Kong, and it’s almost impossible not to be infected by his enthusiasm.

Tell us about the journey that led to you writing this book.

A lot of mental work and research goes into writing a book, especially non-fiction. Building my story, creating narrations on topics that interest both genders, and establishing settings are few of what I try to assemble before I start writing. Consequently, all these affect the duration of writing a book. I remember several times I spoke to my team on public education on period; building a community most especially for Dads & Daughters on better Period Management. Then after completion from the Founder Institute acceleration programme, one of my colleagues invited me to speak to JCI New York Members and I did a presentation, shared an EBook, and later developed the idea to advance those topics, which has been part of our daily conversation and travel across the world. However long it takes, what is important is not to mount unnecessary pressure on oneself as a writer. There is no fixed time to complete a book.

Tell us about one of the people at the centre of this book and what makes them interesting.

Assembly member Garcia has been a driving force behind period dignity policies in the Golden State. In 2017, she had legislation signed into law that brought free menstrual products, to low-income schools, in underserved communities. And later, she helped repeal the tax charged on menstrual health products. The self-proclaimed “Period Princess” introduced Assembly Bill 367; the Menstrual Equity for All Act of 2021, which requires all state university and community college campuses, grade 6-12 public schools and state/local municipal buildings, to provide menstrual products.

Beyond the walls of the State Legislature, Assemblymember Garcia is the Vice-Chair of both the Commission on the Status of Women and Girls. The Commission promotes equality through numerous initiatives, such as increasing the number of girls in STEM education and careers by providing mentorships.

Why does this subject matter to you? Why was it worth spending a year (or five) of your life?

Menstruation is an important phase in every woman’s life, which signals growth and biophysical maturity. Every normal girl or woman experiences this change as a natural, involuntary process. Unfortunately, minimal attention is paid to this aspect of women’s life. Rather, menstruation is a cause for negative societal reactions that tend to reduce women’s self-esteem and is often a harbinger of emotional guilt. What is natural and inevitable has become a social burden for females in many African societies.

Lots of women are constrained or even deprived of the right to manage their menstrual cycle adequately, weighed against social biases and economic inadequacies like poverty; while others who may not face any social rebuffs may lack the financial capacity to manage menstruation hygienically and safely. Therefore, paying attention to proper menstrual hygiene simply becomes an opportunity cost and the alternative foregone.

In your book, you stated that “one of the reasons for the neglect of menstrual hygiene is gender inequality.” How did you come to that?

Menstruating girls and women face several possibilities in unfair societies, and this includes discrimination, stigmatisation, ostracism, and segregation during their periods.

In some societies, women may not be allowed access to some parts of the house; may not make use of common utensils (like plates and cups) or facilities (like bathrooms and toilets) in the home; may not be allowed to attend social events or public gatherings; may be restrained from their regular chores or duties — not as a relief, but because of the “uncleanliness” arising from their period. They are thus considered impure, dirty, soiled, and consequently expected to keep a distance.

This imposes upon the “victims” thus neglecting a feeling of shame and erodes their self-confidence during their period; thus, menstruation becomes a silent curse for girls and women, even those in marriages. The resort to self-help and unwholesome practices increases the risk of cervical cancer, and other infections of their intimate body parts, which they may not be aware of.

What made you decide to tackle this subject? How did you get into menstrual matters, and why do you keep doing it?

The surprising answer is that as a child I went to a catholic church, and we had proper scripture lessons. As I’ve gotten older, I appreciate that there’s a richness there that can inform your life enormously. Treating people as you’d be treated, trying to love your neighbours if you don’t like them – those things are quite powerful if you let them be.

I have always been a proud feminist, lending my voice to issues like Rape, Female Genital Mutilation (Pwashikai) and joined the Menstrual Movement starting with a Sanitary Pad Donation Drive, a project that gives underprivileged girls sanitary pads and attempts to improve learning for girls who cannot afford sanitary napkins. There have been cases of women on twitter with placards complaining of the hike in sanitary pads, with statements like they would rather get pregnant than buy pads at a ridiculous price. If sex is a choice, why is condom free and sanitary pads expensive? Why is Viagra non-taxed and tampons taxed? There was a gender war and I felt it was time for Men to live up to the expectation of Men In Menstruation.

I kept going at it because I was trying to answer a call that I mistook for all kinds of things – Influencing; social work; briefly, the Corporate World. When I discovered Activism, I realised it had elements of many of those things and spoke to a lot of the writing I’d always done on blogs.

What are some of the ways other people are making a difference in the world?

Many people believe that they don’t have what it takes to make a difference to the world. They believe only people like Mahatma Gandhi, Mother Teresa, Thomas Edison, Albert Einstein, Bill Gates, and the likes, can make a difference.

The truth is, every one of us is put in this world to contribute and make a difference to the world in our own unique way. It need not be anything extraordinary. It just needs to be something you do with the intention of ‘doing good’.

There are examples where men have made significant contributions. Dr Earle Cleveland Haas, a general practitioner in America in the early thirties, devised his own versions of cotton and bandage plugs to control bleeding problems in his patients. He perfected an item that could be inserted into the private, now the well-known tampon, and patented it in 1931. The three Johnson brothers, of the multinational company Johnson and Johnson, created and sold their first batch of sanitary napkins in the year 1896 – 1897. A more recent Indian male contributor is Arunachalam Muruganantham, developer of the low-cost pad manufacturing machines known as the Menstruation Man, inspired by Padman Africa.

Nonetheless, these contributions have come at a cost and can cause more harm than good. These mass production business models of disposable products, often laced with chemicals, cause significant damage to the environment and women’s health, and usually fail long term sustainability tests.

What has helped you get to where you are, and what advice would you have for others who want to set off in a similar direction?

You’ve got to be nice to each other, and allow a bit of selflessness and a bit of codependency. Everyone raves about the importance of being independent. Actually, it’s much more mature to learn codependency and trust someone fully. Once you get there, a bit of magic can come into the relationship; it becomes more than the sum of its parts. That’s a real blessing. Collaboration, Consistency and Conquering is more effective than competition

Tell us about this Magical Period Genie in view?

The voice-activated concierge with a Period Hypothesis, inspired by the Genie, is the tritagonist of Disney’s 1992 animated feature film, Aladdin. A magic spirit believed to take human form and serve the person who calls it.