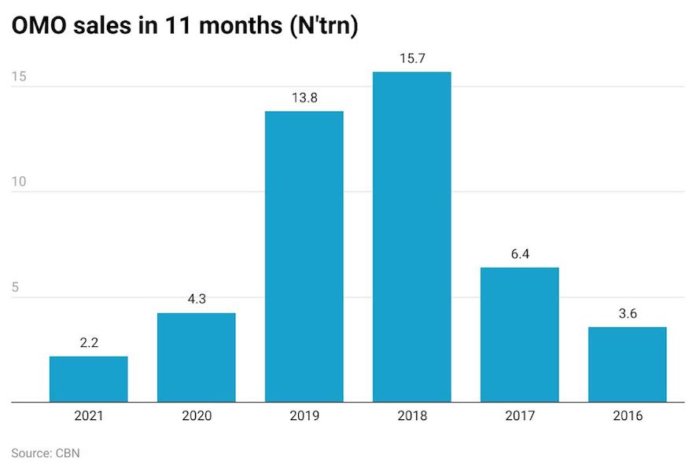 The Central Bank of Nigeria (CBN) Open Market Operation (OMO) sales has declined to five-low following the exclusion of corporates and individuals from participating in the monthly auction, the CBN statistical data has revealed.

Analysis of the data showed that the central bank sold the lowest amount of OMO in 11 months of 2021 than it did in the last five years after a ban on domestic players, which lead to decline in the sales of the short-term instrument.

OMO is basically a short-term market instrument that the CBN uses to control the supply of money in the economy. When it believes inflation rate is high due to increased money supply, it sells OMO to mop-up excess liquidity in the system.

The CBN had in 2019 announced the exclusion of corporates and individuals from participation in its OMO at both the primary and secondary market.

The exclusion, the CBN explained, imply that only banks and Foreign Portfolio Investors (FPIs) can participate in OMOs, while others, will have to shift focus to Treasury-Bills and other investment instruments.

Analysis of OMO sales data for 2021 showed that the CBN sold N413.4billion worth of OMO in January and increased further to N746.12billion in February. In March, it dropped to N295billion and decline further by 30 per cent to N206.8billion in April.

The CBN statistical data revealed that OMO sales dropped to N72.56billion and N65.6billion in May and June respectively.

Also OMO sales activities in July went down to N37billion but increased by 62.6 per cent to N60billion in August.

The central bank had in its economy report for the month of July noted that: “In line with the Bank’s core mandate of delivering price stability, consistent with economic growth, excess liquidity was mopped up through OMO. The average net industry liquidity position grew by 23.9 per cent to N192.07 billion in July 2021, compared with N154.98 billion in June 2021.

“The increase in liquidity was buoyed by the repayment of matured CBN bills and fiscal disbursements to the three tiers of government. Nonetheless, the auctioning of CBN bills, FGN Bonds and Nigerian Treasury Bills (NTBs), provisioning and settlement of foreign exchange purchases, as well as Cash Reserve Requirements (CRR) debits, moderated liquidity in the banking system.”

Interestedly, OMO sales increased significantly in September to N120billion but dropped to N99billion in October and closed November at N80billion.

Explaining the ban on corporate, individuals from access to the OMO market and the restriction of banks from buying Treasury bills (T/bills) on behalf of borrowing customers, the Governor, CBN, Mr. Godwin Emefiele, had said: “What the CBN did in 2019 was to ensure the exclusion of PFAs and corporates and individuals that are in the OMO market because the CBN felt that the cost and size of OMO were unbearably high.

“This has been achieved considerably. We see the FPIs as part of the sources through which foreign flows come into Nigeria. So, for anybody to say the CBN is trying to reduce the size of OMO and is planning to exclude FPIs is totally inaccurate. This is a financial market matter and the only person who can give responses on this issue would be the Financial Market Department of the CBN who are like the treasurers.

Commenting, analysts explained that CBN policy is in line with its drive to divert liquidity away from risk free instruments to the real sector of the nation’s economy.

In a chat with THISDAY, the head of research, Pan African Capital Holdings Limited, Moses Ojo stated that CBN’s weak activities in OMO market was due to effect of COVID-19 pandemic, stating that banks were concerned about lending to real sector as demanded by the regulating body.

The CEO, Enterprise Stockbrokers Plc, Rotimi Fakayejo said the decreased OMO auctions was due to weak economy and policy stance of the CBN.

He noted that the weak OMO sales impacted on the capital market as corporate and local investors renewed interest in fundamentals stocks listed on the Nigerian Exchange Limited (NGX).

His words: “OMO is one of the instruments CBN used in controlling money in circulation, making sure the rate of inflation is reduced. Investors will always go to where it is easy for them in terms of reaping their investment, be it short-term or long-term.”

A group of analysts at CardinalStone Research had explained that: The restriction of key corporates, such as PFAs and Insurance companies, from participation in OMO is likely to free up excess investable cash for allocation to assets beyond fixed income alternatives.

Analysts at Financial Derivates Company Limited (FDC) had stated that the banned of corporates and individuals would give room for foreign portfolio investors, as OMO auctions are mostly oversubscribed.

“However, FPI is hot money and is not sustainable for the economy. It could fizzle out at the slightest sniff of crisis. Could trigger currency weakness as investors shift to the foreign exchange market. To increase activities in the stock market, investors are attracted to high returns and the performance of companies listed on the NSE is a function of macroeconomic variables,” they added.