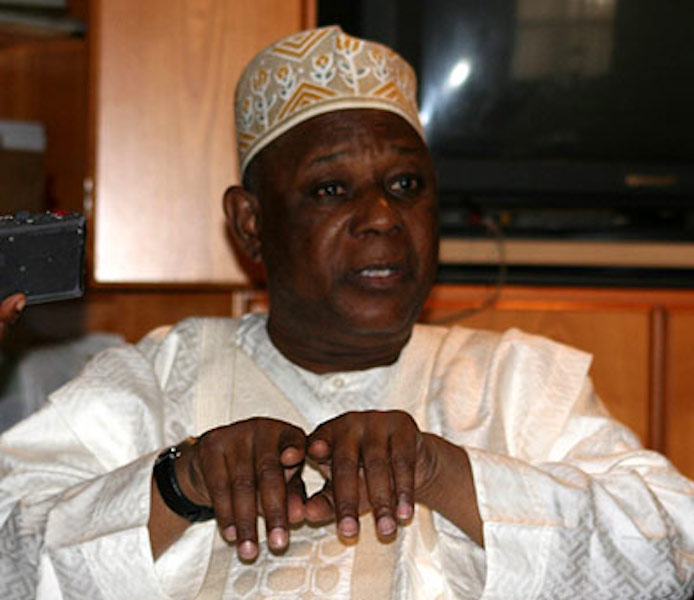 In a tribute to the former President of South Africa, the late Frederik Willem de Klerk, which was obtained by THISDAY, Gusau disclosed that the then British Prime Minister, Mrs. Margaret Thatcher, had specifically asked the former military President, General Ibrahim Babangida to ascertain the commitment of De Klerk to majority rule.

De Klerk, who was the last minority president of South Africa, later became the late President Nelson Mandela’s deputy under the majority rule.
Gusau stated that Thatcher had in 1989 visited Nigeria twice within one week where he told Babangida that de Klerk was working to bring an end to minority rule in South Africa.

According to the former NSA, Thatcher also sought the help of Nigeria to ascertain the level of de Klerk’s commitment and also strengthen de Klerk’s efforts.

Gusau noted that while Babangida believed that Thatcher was an honest broker on the issue, the former military leader had doubts as to whether de Klerk meant business or that he would get the support of the white establishment in South Africa

The former NSA described the late former president of South African as a towering figure who was determined to right historical wrongs without minding the consequences.

Gusau said Nigeria’s strategic role to end apartheid started on March 28, 1989, when, on her way to South Africa, the then British Prime Minister, Mrs. Margaret Thatcher decided to do a stop-over in Lagos to see Babangida.

The former NSA quoted Thatcher as telling journalists at the airport that she was very “happy to accept President Babangida’s invitation to stop over in Lagos to have talks with him.
“I do this because I have great admiration for the leadership he is giving here and for the courageous way in which he is tackling the economic problems of the country,” she had added.
Thatcher had also disclosed that since she and Babangida would be attending the Commonwealth Conference CHOGM scheduled to hold in Malaysia in October of that year, her visit was an opportunity to chat with the Nigerian leader ahead of the conference.

Gusau said the former British Prime Minister also took a few questions after her brief remarks, which were all centred around the situation in South Africa and the role of Britain at the time.
“While she was evasive in her responses, Mrs. Thatcher alluded to a meeting between Soviet and British academics and the ANC ‘in which they urged that the problems of South Africa be solved not by confrontation, not by violence, but by negotiation. That is our objective too.’ By her return itinerary, Mrs. Thatcher was to do a brief stop-over in Accra, to see President Jerry Rawlings of Ghana, before heading for London. But she again routed her flight from South Africa through Lagos where she met President Babangida for a second time within a week,” Gusau explained.

Gusau stated that Babangida later invited him for a briefing after Thatcher’s visits and saddled him with what he (Gusau) described as a delicate assignment.
Revealing what transpired between him and Babangida, the former NSA stated that the former military president informed him that Thatcher had told him (Babangida) in their two meetings that de Klerk was working to bring an end to minority rule in South Africa.

Gusau also disclosed that Babangida told him that the former British leader sought the help of Nigeria to ascertain the level de Klerk’s commitment and also see how Nigeria could strengthen de Klerk’s efforts.

The former NSA also disclosed that after Babangida had given him a list of contacts within the South African government, including close aides of President de Klerk, he decided to co-opt his Chief of Staff, Colonel Kayode Are into the assignment given to him by the former military ruler.
“Colonel Are was not only my chief of staff at the time but also a close friend whose opinion I deeply valued. The two of us embarked on this extraordinary mission with no time to spare. We first met with the then Director-General of South Africa’s National Intelligence Service (NIS), Dr. Niel Barnard, in London on 15th January 1990. That marked the beginning of a long and enduring partnership between our two institutions, and I visited South Africa several times thereafter to discuss the way forward. I also had direct sessions with President de Klerk who, in our first meeting, made it clear that he wanted to be the last minority president. I was a bit skeptical about that even though he sounded genuine,” Gusau explained.

“On 2nd February 1990, while we were still working underground with their security officials, President de Klerk took the world by surprise. In his address at the opening session of parliament, he announced the end of segregation of public facilities in South Africa, recognised the African National Congress (ANC) as a legitimate political party, and set a date for the release of Mr. Nelson Mandela from prison after 27 years of incarceration. Not surprisingly, as de Klerk made his speech, there were shouts of ‘traitor’ from several MPs within his own Conservative Party, who staged a dramatic walk-out. One of them, Koos van der Merwe later addressed the media where he described de Klerk as a traitor to his people’ because, by the declaration, the then South African president was “trying to kill the Afrikaner nation,” Gusau added.

Gusau said de Klerk’s historic speech had led to far-reaching political reforms and had also marked the beginning of the end of the apartheid regime in South Africa.
He said he visited de Klerk four weeks later in Cape Town with a letter from Babangida, adding that the culmination of their discussion was a meeting between both presidents in Windhoek on March 31, 1990, at the sidelines of Namibia’s Independence Day celebration.

“Much more significantly, however, five senior Nigerian journalists were in Namibia for the event. When I sounded them out about whether they would like to visit South Africa, they were excited. I discussed the idea with South African officials, and it was agreed that they could undertake a visit. A vehicle was provided for the long journey that took almost 20 hours from Windhoek to Johannesburg. The reports filed by these top journalists when they returned to Nigeria validated most of what Colonel Are and I had witnessed which confirmed that De Klerk was moving in the direction of majority rule,” Gusau said.

Gusau noted that at some point, he discovered that while Nigeria’s engagements with South African officials were cordial and fruitful, it was also necessary to brief the leader of Inkatha Freedom Party (IFP), Chief Mangosuthu Gatsha Buthelezi.

He said he had received the feedback from reliable South African contacts that Buthelezi was aware of Nigerian mediation, stressing that as a critical factor in the country, Buthelezi needed to be carried along.

“President Babangida wrote him a letter. Having welcomed the idea, the South African Government provided the plane that took me to Ulundi, capital of Zulu Kingdom where Chief Buthelezi was happy to receive me. He called his entire cabinet before reading President Babangida’s letter. There and then he asked the Cabinet Secretary to draft a reply. I then drove with him to the statute of their ancestral warrior, Shaka Zulu where we took photographs before I flew back to Johannesburg,” Gusau explained.

Gusau said although he and Colonel Are worked underground in their engagements with the South African government, some of their colleagues within the continent alleged that high-ranking Nigerian officials were collaborating with the apartheid regime, adding that a few African leaders were uncomfortable with the information.

He, however, stated that the problem was left for Babangida to handle with his colleagues.
“In April 1992, President de Klerk undertook a three-day State Visit to Nigeria at the invitation of President Babangida. The visit was the first by a South African head of state to our country, and President Babangida—who was at that period chairman of the Organisation of African Unity (now African Union)—signaled to the continent and the rest of the world that Nigeria supported President De Klerk in his efforts. This certainly was the key to South Africa’s acceptance by the rest of the continent.

“Following President de Klerk’s death on 11th November this year, his office issued a prerecorded posthumous video where he tendered an apology for “the pain and the hurt and the indignity and the damage that apartheid has done to black, brown and Indians in South Africa.” I believe he genuinely meant what he said.

“In their tribute, the Mandela Foundation said that President de Klerk would “forever be linked to Nelson Mandela in the annals of South African history” while President Cyril Ramaphosa said de Klerk “took the courageous decision [as president] to unban political parties, release political prisoners and enter into negotiations with the liberation movement amid severe pressure to the contrary from many in his political constituency.”

“As I reflect on the legacy of the late President de Klerk, I am reminded of the extraordinary things ordinary people can achieve. It took great courage for President de Klerk to stand up to the white establishment in South Africa after which he accepted the position of a deputy in President Nelson Mandela’s ANC-led Government of National Unity. He will therefore be remembered as a peacemaker who changed the course of history in his country. And I am grateful for the part that Nigeria played in supporting his efforts while I salute the courage of President Babangida for taking the right decision at the time,” Gusau concluded.