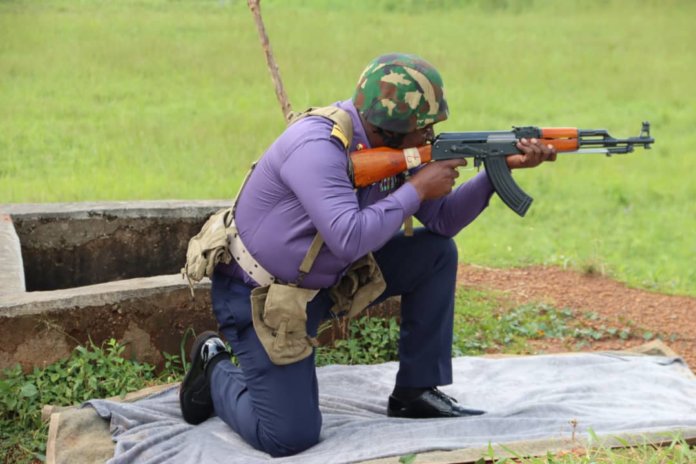 Held at the Nigerian Army firing range of the 192 Battalion in Owode, Ogun State, the three-day exercise saw 500 naval personnel test their marksmanship in one of the oldest programmes in the military.

Range Classification
The exercise as the name implies put personnel to test at the shooting range in terms of accuracy of shots and efficiency in handling weapons.

Therefore, to ensure that the Nigerian Navy (NN) personnel especially those drafted to battle insurgency and other pockets of insecurity, are combat ready, the need to constantly train and retrain them especially in weapon handling for improved shooting skills and professional efficiency in line with global best practices, came to bear as the service flagged off its annual SAFEX for 2021.

Shooting at the Range

This year, the exercise had naval personnel from all units and formations under the command test their skills in weapon handling and marksmanship. The exercise was declared open by the Flag Officer Commanding (FOC), WNC, Rear Admiral Jason Gbassa.

Following the arrival of the participants, the next step was the registration and mustering of the firing party before the reading of range safety rules and regulations. The commencement of firing began after the arrival of guests and special guest of honour.

Leading by example, the FOC took to the gun like fish to water as he aimed for target at the ceremonial shot and falling of plates, which was done within the 100metres radius.

The firing parties were made to lie and take their firing position with the target being the white small plates, which they are supposed to bring down with their bullets. After the first team brings down their five plates, both teams switch sides for another go at the plates.

After that, other batches took positions, some hitting the target while others missed the bulls eye.

The FOC’s Address
Commending the Chief of the Naval Staff, Vice Admiral Awwal Zubairu Gambo for providing the necessary logistics support, leadership and guidance, the FOC in his speech said the training package is aimed at improving officers weapon handling skills and reducing numbers of accidents.

According to FOC, “the Western Naval Command Small Arms Firing Exercise is a yearly event aimed at improving the competence of Nigerian Navy personnel in small arms handling and shooting skills thereby enhancing operational efficiency. The exercise was affected last year due to the outbreak of COVID-19 but hope to organise more training that would build confidence to defend the nation.

“The exercise forms part of individual and group training packages and it has in the past afforded the Navy the opportunity of identifying marksmen for inter-command and inter-Service Competitions.

“This is part of our training package whose objective is to enhance weapon handling skills of our men, their firing skills as well as to reduce incidences of fire accidents and it is part of inculcating discipline in the men.”

While thanking the GOC 81 Div for approving the request to use the shooting range, the FOC said: ” History teaches us two profound and important lessons about marksmanship, the first is that it is an acquired skill only developed through practice and training.

“The second is that the battlefield is a very unforgiving classroom. Therefore, it is imperative for all to note that success and survival in real combat is dependent on hard work during exercises of this nature.

” Training exercises all over the world is conducted to correct weaknesses and sustain strength. In achieving these objectives, training exercises will always be tough and physically challenging.

“This exercise therefore will not be an exception considering the processes you must have passed through right from the point of selection. I therefore enjoin you all to apply yourselves during this exercise.

“This exercise would not have been possible without the timely approval of the Chief of the Naval Staff to our arms and logistics request. Thus, I enjoin everyone to take advantage of this unique opportunity to enhance their weapon handling proficiency and knowledge.”

It is noteworthy to state that SAFEX also exerts discipline on the men because once a weapon is handed over to you, it takes discipline to control your anger and not respond wrongly. The end goal however is that the lesson learnt from the exercise would be a rewarding one in the field.

In closing, Gbassa, who commended the officers and men who participated, expressed satisfaction that the objectives of the exercise were achieved based on the satisfactory performance of those that participated.

But before the FOC and his team left the range, all were declassified to ensure none left the area with empty cartridges or empty live rounds, as being found with such outside the range is a criminality punishable by law.