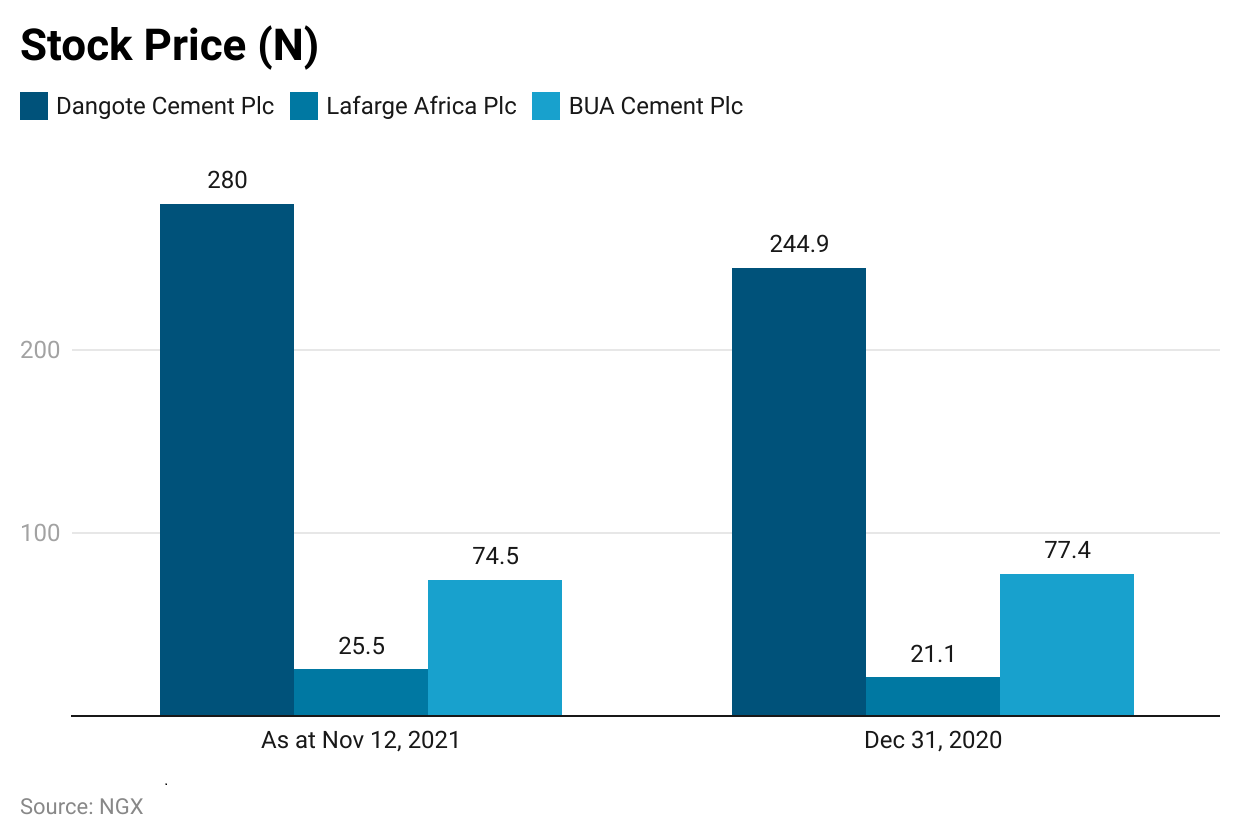 A total of three major cement manufacturing companies in Nigeria jointly reported N523.7 billion as profit before tax in the nine-month period of 2021, an increase of 43 per cent from N365.46 billion recorded in the corresponding period of 2020.

The listed cement manufacturing companies on the Nigerian Exchange Limited (NGX) recorded a stronger earnings marked with significant increase in revenue, a recovery from the 2020 Covid-19 pandemic.

The breakdown revealed that Dangote Cement reported 49.1 per cent increase in profit before tax to N405.49billion in nine months ended September 30, 2021 from N271.96billion reported in nine months of 2020.
The Group Chief Executive Officer, Dangote Cement, Michel Puchercos said: “Given the strong rebound in Q3 2020 following the impact of COVID-19 in the first half of the year, volumes in Q3 2021 were slightly lower than Q3 2020, as anticipated, though worsened by heavier rains.

“However, the overall growth trend continues, supported by our ability to meet the strong market demand across all our countries of operation. The economic performance and efficiency initiatives across the Group, enabled the offsetting of inflationary pressures on some of our cost lines.”

With the growth in profit, Lafarge Africa had announced an interim dividend of N16.1billion with a pay-out of N1 per 50 Kobo ordinary shares.

CEO of Lafarge Africa, Khaled El Dokani, in a statement said: “We are pleased to announce the payment of an interim dividend to our esteemed shareholders. This reiterates our commitment to ensure that we continuously deliver value to all our stakeholders.

“We are equally pleased with the progress we are making on sustainability; our use of affordable clean energy and agro-ecology footprint are in accordance with our net zero pledge journey.

“We extend our sincere appreciation and gratitude to all our stakeholders for their continued support.”
The growth recorded by these companies impacted on Gross Domestic Product of the sector that gained 3.89 per cent in the second quarter of 2021 from -5.54 per cent recorded in second quarter of 2020, according to National Bureau of Statics (NBS).

The bureau disclosed further that the construction sector grew by 47.11 per cent in nominal terms (year on year) in the second quarter of 2021, a rise by 50.31per cent points compared to the rate of -3.20per cent recorded in the same quarter of 2020.

According to NBS: “There was an increase by 3.23per cent points when compared to the rate recorded in the preceding quarter.

“The real growth rate of the construction sector, in the second quarter of 2021, was recorded at 3.70per cent (year on year), higher by 35.46per cent points from the rate recorded a year previous. Relative to the preceding quarter, there was an increase of 2.27 per cent points.

Meanwhile, with positive growth in these companies profit before tax, investors reacted as Dangote Cement and Lafarge Africa market capitalisation appreciated by N669.8billion in 45-week trading on NGX.

The stock price of Dangote Cement in its year-till-Date performance appreciated by N598.1billion in market capitalisation as its price moved from N244.90 it opened the year to N280 as at November 12, 2021.

Lafarge Africa also gained N71.68billion in market capitalization as its stock price closed November 12, 2021 at N25.5 from N21.05 it opened the year.

However, the stock price of BUA cement has depreciated to N74.5 from N77.35 in 45-week trading on the Exchange, translating into N96.5billion profit-taking by investors on NGX.

An Economist & Private Sector Advocate, Dr Muda Yusuf told THISDAY that marginal increase in price of cement impacted on these companies’ profit declaration in the period under review.

He stressed that these companies might surpasses 2020 performance, given demands by the governments and domestic use of the products.

“According to him: “The demand in the construction sector has contributed to these companies revenue which eventually impacted on profit in the nine months of 2021. Since there is improvement in government spending as a result of hike in global oil prices and non-oil revenue, we have seen government spending more in infrastructure and it is expected to grow cement sales.

“I know also that some of these companies export to neighbouring countries and it also contributed to their price. Mind you, we have seen hike in prices of cement which is responsible for an impressive profit.”

He noted that the marginal increase in prices of cement tends to inflate inflation
“The profits declared by these companies will only impact on investment in their stocks but on the economy general, it introduced inflation to the cost of building materials and it is expected to escalate the cost of construction. It might affect the housing target of the federal government. While some people may be happy with returns on investment, another critical sector might be hampered, ”he said.

He explained further the buy-back by Dangote Cement drives growth in stock price in 45-week trading, while on BUA cement downward in stock price is due to investors’ profit-taking.

He explained that: “The share buy-back by Dangote Cement is responsible for gain in price as investors taking position. BUA has been impressive in the first quarter of this year. Thereafter, a lot of investors have been taking profit, which is expected to impact on price on NGX. The impressive performance of Lafarge Africa continued to push its stock price and the management interim dividend also renewed investors’ confidence.”