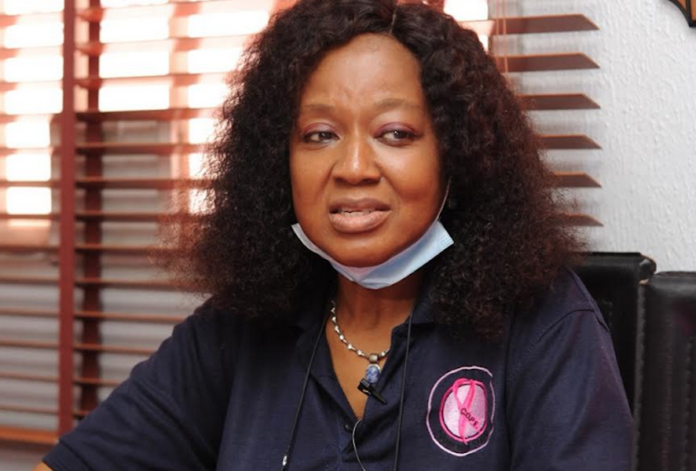 Cancer is a leading cause of death worldwide, accounting for 7.6 million deaths and around 13 per cent of all deaths in 2008, according to the World Health Organization (WHO).

Deaths from cancer worldwide are projected to continue to rise to over 13.1 million in 2030, while about 70 per cent of all cancer deaths reportedly occur in low-and middle-income countries.

The global health body further reveals that breast cancer is the most common cancer in women worldwide, with 2.26 million cases recorded in 2020. It is the fifth leading cause of global cancer deaths.

In Nigeria, breast cancer is said to represent about 12 per cent of all new cancer cases and 25 per cent of all cancers in women. Additional statistics reveal that one in 12 women is expected to be diagnosed with breast cancer with many cases occurring in premenopausal women. One out of eight women also reportedly has lumps in the breasts.

The gathering of eminent persons, survivors and their families, and members of Corporate Nigeria at the Ikeja, Lagos office of Care. Organisation. Public Enlightenment (C.O.PE), the Nigeria’s foremost breast cancer awareness and advocacy non-governmental organisation, on Thursday, October 14, was a further affirmation that breast cancer challenge is real and a long battle to fight.

The occasion was the commemoration of the 26th anniversary of C.O.PE, the leading not-for-profit dedicated to reducing the mortality rate of breast cancer in Nigeria through screening, counselling, referral, education, enlightenment and nurturing.

The recollections at that event were either of direct experience or shared story of loved ones or friends that have gone or going through the disease. However, hope, empathy, love and survival tips emerged amidst the hardship and losses that can result from breast cancer.

The event indeed, served to celebrate the Founder/Chief Executive Officer of C.O.PE, Mrs. Ebunola Anozie, and her NGO for 26 years of raising awareness and giving succor to breast cancer victims in Nigeria. It was also to raise a stronger voice of urgency to redouble collaborative efforts to combat the killer disease and decrease the number of those infected.

Anozie’s inspiration to establish C.O.PE was a personal experience: her mother died of colorectal cancer in 1970, the father died of cancer of the stomach in 1995, while she also had a scare late September in 1995 after having an uncomfortable feeling in her breast.

Although doctor allayed the fear after undergoing a medical check, she said ‘‘these personal experiences led to the birth of Care Organization Public Enlightenment in October 1995.’’

And she has reasons to celebrate the success story having seen several women overcome breast cancer, more women presenting themselves for breasts examination and speaking out, and corporate and public organisations and private individuals becoming more aware and involved in fighting the disease.

Mrs. Anozie, said through increased awareness and advocacy, C.O.PE has screened more than 50,000 women across over 10 states in Nigeria beside Lagos, while disclosing that plans were underway to acquire a breast cancer screening mobile van and the construction of a permanent operation base as part of steps to increase the number of beneficiaries of its breast cancer intervention next year.

While disclosing that her organisation attends and renders assistance to breast cancer patients every day, she said that the free monthly breast screening and counselling for women, which used to hold once in a month, would now hold twice monthly.

‘‘Over the years in Nigeria, we have also screened more than 50,000 women. Data from our breast ultrasound scan screening initiatives, which spans over two decades, shows that one in 12 women is expected to be diagnosed with breast cancer and many cases occur in premenopausal women,’’ she stated.

She also said that C.O.PE has increased its capacity in providing free screening and support to breast cancer patients with the support of corporate bodies and individuals particularly with the donation of the first-ever digital breast cancer screening machine by Polaris Bank and another by Leadway Assurance.

Some of the breast cancer survivors, whose post-survival years ranged from eight to 23 years, were present at the event. Narrating their experience and testimonies, they expressed appreciation to Mrs. Anozie and C.O.PE for the moral and financial assistance through the pre, treatment and post-operation phases of breast cancer, stating that the organisation has given them reasons to live again.

A survivor, Mrs. Nnenna Obasi, who said she discovered a lump in one of her breasts in 2013, stated that C.O.PE went with her through the harrowing journey and today, she has got back her life and confidence. ‘‘It was a harrowing journey, but with the support of Mrs. Anozie and C.O.PE, I am here today. I live a normal life, I am healthy. This is my eighth year as a breast cancer survivor,’’ she enthused.

Also, a survivor, Mrs. Bolanle Uwaoje, disclosed that although she had removed lumps in her breast three times, her breast cancer case began in 2014 when doctors confirmed her worst fear, but she was thankful to Mrs. Anozie for providence that crossed their path.

Her words: ‘‘The compassion, care and love that I received through Mrs. Anozie cannot be quantified. I am a living testimony of how much God has used her to give me hope and reason to live a happy woman. It’s going to eight years now; I am fine and hope that it will continue to be fine. Thanks to you ma. Thanks to C.O.PE for your support.’’

For Mrs. Anozie, it is not uhuru yet as breast cancer rate in Nigeria remains high due to factors including late presentation, lack of finance due to the high cost of treatment, illiteracy, cultural and religious beliefs, and fear of losing their breasts.

‘‘Unfortunately, more recently, our monthly screenings show that one out of eight women have lumps in their breasts. Some women who have cancerous lumps in their breasts refuse to use orthodox medicine and seek traditional means or go to religious houses, while others don’t do anything due to lack of finance or fear of losing their breast,’’ she expressed concern.

She restated her call on the Federal Government to set up a National Breast Cancer Centre in Nigeria, encouraged all women to do regular breast self-examination while women 40 years above should go for mammogram. Men aged 40 were also advised to go for prostate cancer check-up, and all adults do regular medical check.

The breast cancer advocate while soliciting more support for C.O.PE and breast cancer patients, encouraged younger generation on volunteering, and urged parents to imbibe the culture in their children from an early age.

A 10-minute video on Breast Self-Examination (BSE) that teaches women the step-by-step of breast self-examination, and enabled by Pfizer, was also unveiled during the event.

Chairman, Board of Trustees, C.O.PE, Emeritus Prof. Frank Osato Giwa-Osagie, commended Anozie for her courage and commitment to the vision of the NGO. He said through her unrelenting advocacy, awareness and support to breast cancer patients, she has given hope and joy to many families that have given up because of the devastating effect of cancer especially breast cancer.

Going down the memory lane, he said, ‘‘The first day she walked into my office at the Lagos University Teaching Hospital (LUTH) at Idi Araba, to come and tell me about her vision, and that she had made me the chairman of the board, I was amazed at her audacity. I told her, I am an O&G (obstetrics and gynaecology) professor of medicine, I am not an oncologist. She said, it did not matter, you’re the one I have chosen to chair the board. I said, what kind of a rare human being is this?’’

Continuing, he said, ‘‘Twenty-six years and we are still counting. Ebunola has demonstrated uncommon courage and bravery giving back to humanity through her NGO. By providing advocacy, mobilising resources and giving care to persons suffering from breast cancer, she has restored joy and hope to many families. And that is the motivation that has made me to stand by her and remain with her all these 26 years. It’s being an amazing journey. We can only wish her more successes in the years to come.’’

Representatives of corporate organisations and partners commended Mrs. Anozie for her commitment, hard work and consistence that have made the NGO an enduring legacy brand, wishing her more fruitful years as well as assured her of continuous support.