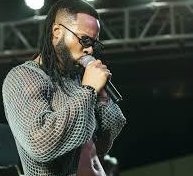 Flavour announced that he will be performing live at the Legendary SOB NYC on Wednesday, November 3rd 2021, Home to acts from Beyonce, Black Eye Peas, Dangelo, SWV, Sean Paul Drake and a host of others, the SOB is one of the most famous music venues in New York City Soho.

This is off the release of his music video for his new single, “LEVELS ” which garnered over One million views in 48 hours. The catchy video playfully speaks volumes to the fervour, grace and success he has received with cameos from Nollywood veterans, Kanayo O. Kanayo, Yul Edochie, Cubana Chiefpriest and more.

A limited number of VIP packages and general tickets are available on sale. To sign up for tickets and to find out more information on the official website