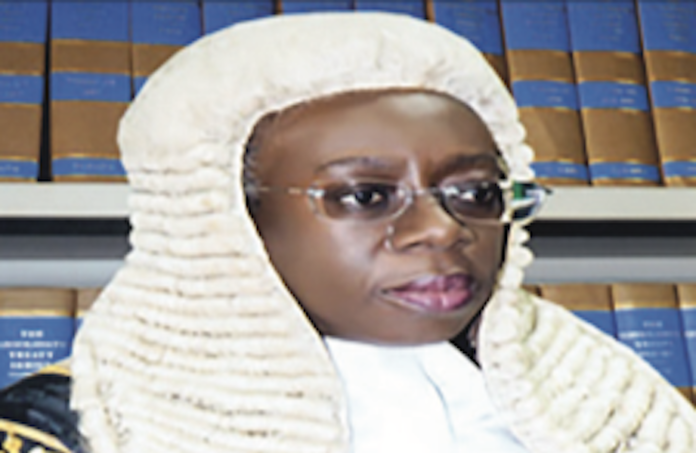 The Appellant, a Christian religious organisation (having several branches including the Mushin Branch), was duly registered in 1963. In 1976, one Pastor Igbeare (a promoter and in the employment of the Appellant as resident Pastor in charge of the Mushin Branch), purportedly purchased a parcel of land at 23/25 Fayemi Street, Ejigbo Town near Mushin from the Agbeke family and held on to the purchase receipt.

Subsequently, the said Pastor led a group that broke away (formed a rival church) from the Appellant, and was registered in 1996 as The Registered Trustees of Grace Church of Christ (the Respondent). Upon its incorporation, the Respondent applied to Lagos State in its own name to ratify the 1976 transaction between the Appellant and the Agbeke family, using the purchase receipt he held on to. This application for ratification was due to the fact that the Lagos State Government had allegedly acquired the area of the disputed land for public purpose, divesting the Agbeke family of its title and interest vide a Lagos State Government Official Gazette No. 60 of 7th December, 1972. Consequently, the Respondent was issued with a Certificate of Occupancy (C of O) on 24th August, 1997, after payment of the necessary fees.

The Appellant, however, instead of taking steps to object to the issuance of Certificate of Occupancy in favour of the Respondent, it went ahead to issue a Notice of Revival Service scheduled to take place on the disputed land. The Respondent contended that each Branch of the church generated its own funds, and as such, all Branches were not subordinate to the Headquarters. It contended further that it had deposited building materials on the subject property, preparatory to the construction of a permanent site for its church, but the materials went missing. Despite warning letters written by the Respondent to the Appellant, there was no progress in this regard.

Consequent upon the foregoing, the Respondent instituted an action against the Appellant before the High Court of Lagos State, Ikeja, seeking various declaratory reliefs, inter alia, that the Respondent is the body entitled to the Right of Occupancy over the subject property. The Appellant, however, counter- claimed against the Appellant, that it was the only person legally entitled to the Certificate of Occupancy in respect of the subject-matter, as all the Branches of the Appellant, including the Mushin Branch, were under the control and authority of the parent body. The Branch Pastors, including the said Pastor Igbeare, were trained by the Church and their salaries were paid by the parent body; hence, the funds with which the property was purchased belonged to the parent body, and the property was purchased in its name while the purchase receipt was kept in the custody of the said Pastor Igbeare, as the Vice President.

The following issues were considered by the Supreme Court:

1. Whether from the totality of the evidence before the Court, the Court of Appeal was right in setting aside the judgement of the trial court.

2. Whether the Court of Appeal was right in granting all the reliefs of the Respondent; particularly its claims for special and general damages which were not proved by credible evidence.

3. Whether the Court of Appeal set up a case, different from the one presented in the pleadings and evidence of the parties.

4. Whether the Court of Appeal’s reference to a Cross-appeal in the judgement, occasioned a miscarriage of justice to the Appellant.

On the first issue, counsel for the Appellant argued that in civil cases, the burden of proof has two meanings: the burden of proof as a matter of law and pleadings which is always stable, and the burden of proof in relation to additional credible evidence or the evidential burden which shifts depending on the scale where it tilts. He submitted that the Appellant was the owner of the receipt used for ratification of the subject-matter, before the issuance of Exhibit P2. He also submitted that the Respondent was not even in existence when the Appellant’s receipt was used, and as such, was legally unable to own the subject-matter. He further submitted that from the witness testimony, the promoter of the Respondent was in fact an employee of the Appellant (when he purchased the land) up until 1995, and the land was purchased for and on behalf of the Appellant. In reaction, counsel for the Respondent argued that the issue before the Court of Appeal was that the sale by the Agbeke family in 1976 was null and void ab inito, as the Agbeke family had been divested of their title by the 1972 Public Acquisition, which inured to the Lagos State Government by virtue of Section 1 of the Land Use Act 1978. He submitted further that the Court of Appeal rightly held that where an acquisition occurs for public purposes, all prior interest therein stands extinguished, as seen in this case. He also contended that the Respondent was in lawful possession, due to the title granted to it by the Lagos State Government. Relying on the Lands Use Act.

On the second issue, it was argued on behalf of the Appellant that the Respondent did not place any material evidence before the court, to show/support the fact that the Appellant allegedly carted away their building materials and destroyed their fence. Conversely, the Respondent merely pleaded and testified that the building materials which were bought, got lost without more.

On the third issue, counsel for the Appellant argued that the Respondent did not plead or rely on the fact that Exhibit P2 was granted to it on the ground of overriding public interest for a place of worship, and as such, the Court of Appeal was expected to confine itself to the issues raised before it by the parties. In reaction, counsel for the Respondent argued that in paragraph 19 of its 2nd Amended Statement of Claim, it was stated that the land was required for a place of worship, which was supported by the oral evidence of PW1.

On the fourth issue, it was argued on behalf of the Appellant that by virtue of the Court of Appeal’s reference/reliance to a non-existent “Cross-appeal” in the concluding part of its judgement, the Court of Appeal relied on an issue not connected with the real question placed before it for adjudication, which has resulted in the miscarriage of justice to the Appellant. Conversely, counsel for the Respondent argued that it is not every error or mistake made by the court that will lead to the decision being overturned, and that the Appellant failed to show the effect the error or mistake made by the court had on its decision.

Determining the first issue, the court stated that in an action for declaration of title, the onus is on the Claimant to establish his title upon a preponderance of evidence or on the balance of probability, and must succeed on the strength of his own case and not on the weakness of the defence, if any, except where the Defendant’s case supports his case – IDUNDUN v OKUMAGBA (1976) 9-10 SC 22.

Further, ratification is to put parties in the same position as they would have been, had the act ratified been previously authorised – VULCAN GASES LTD v GESSELSCHAFT FUR IND. GASVERWERTUNG, A.G. (2001) 9 NWLR (Pt. 719) 610. The act sought to be ratified by the Respondent in this case was the invalid sale by the Agbeke family; it was not an open application for allocation of parcel of land. The document presented by the Respondent for ratification, was the purchase receipt from the Agbeke family issued in the Appellant’s name in 1976. Where there are competing titles, which trace their root to the same source, the one who can show a better title prevails. It is also the law that Certificate of Occupancy is only a prima facie, not a conclusive evidence of ownership of the land to which it relates. Flowing from the above, the court held that having discovered that there was a defect in the title obtained from the Agbeke family, the Appellant was the proper party entitled to apply to the Lagos State Government for ratification of same, and for the grant of a Statutory Right of Occupation in respect thereof. On the principle of Nemo dat quod non habet, the Respondent who was not in existence at the material time of the transaction (in 1976), could not have been held to acquire the title in 1976, which was ratified in 1997. At the time of the transaction with the Agbeke family, the Respondent was not in existence, and the promoter of the Respondent was still receiving instructions from Appellant in his capacity as the Pastor of the Mushin Branch. As a Branch of the Appellant who relied on it for spiritual and contractual guidance as at 1976, the Respondent’s promoter, Pastor Igbeara was merely an agent of the Appellant as his principal/employer at the time. What the Lagos State Government ratified in 1997 was for the holder of the title as at 1976, which was the Appellant.

Deciding the second issue, the court held that the law is that special damages must be strictly proved by the person who claims to be entitled to them, the nature of the proof required depends on the facts and circumstance of the case, but the evidence must however, be credible – OSHINJIRIN v ELIAS (1970) 1 All NLR 151 at 156. Guided by the authority above, the Supreme Court held that the Respondent did not establish the causal link between the Appellant and the loss sustained, neither was it stated in the pleading that the building materials were removed by the Appellant or its servant/agents.

Their Lordships held that for a miscarriage of justice to occur, the error must be fundamental and must have a crucial effect on the decision. The Appellant in this instance, has not satisfied the above requirement which entails, the Appellant showing the damage suffered as a result of the error of the court.