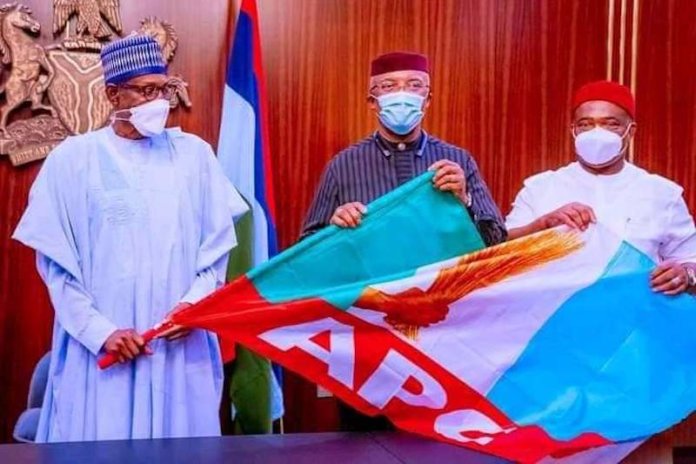 Last Wednesday’s news of the defection of the Deputy Governor of Anambra State, Dr. Nkem Okeke in Abuja did not come to many as a surprise because it had been long-awaited. There had been rumours that the deputy governor planned to defect to the All Progressives Congress (APC).

Okeke was said to have fallen out of favour with Governor Willie Obiano, to the extent that he had allegedly been denied several benefits that should accrue to his office.

THISDAY gathered that some of the alleged ill-treatments meted on the deputy governor include: Seizure of his entitlements, except his salaries, refusal to change his official cars, and denial of his travel, wardrobe and other allowances.

Though many had adjudged Okeke to be loyal to the governor, the first sign that all was not well between him and his principal came two weeks ago, when he allegedly shunned the governor’s directive to represent the state at the South-east security meeting in Enugu State, on the grounds that he had only a few security men attached to him.

He was also said to have cited the poor state of his vehicles, while noting that the security situation in the South-east, demands that his convoy should have a bullet-proof car if he must make the trip to Enugu.

His eventual movement to APC has however sparked a new argument about his political value in the state.

The APGA fired the first salvo when in a press statement by the National Publicity Secretary, Mr. Tex Okechukwu, it dismissed Okeke as a paper weight politician, whose movement to APC cannot change Anambra people’s resolve to vote for APGA.

“The deputy governor had thought that the governor and the party were going to hand over the governorship ticket of the party in the last primary to him on a platter. When that didn’t happen he started behaving abnormally, even to the point of insubordination and dereliction of duties.

“The exit of the deputy governor, without formal notification to the party or his principal, is uncalled for, ill-timed and ill-advised as the governor had always treated him with respect, love and consideration. Let nobody be deceived, APC has no root anywhere in Anambra State and that is why all that they do is going about luring political deadwoods with money and other lucres,” the statement explained.

APGA said it would win the governorship election without the deputy governor, while also describing him as one who has no political value. The party frowned at what it called the desperation being exhibited by the APC in the build-up to the November 6 governorship election, calling on all members of the party to remain united to ensure that APGA wins the election with wider margins.

“We call on Governor Willie Obiano not to be distracted by the defection of his deputy, which is a ploy to create a semblance of disunity in his government. No matter the designs of the opposition and other subterranean forces, APGA is poised to win the forthcoming election and continue with the massive infrastructural development going on in the state”, the statement added.

On his part, the candidate of the APC, Senator Andy Uba has welcomed the deputy governor to the party, describing the move as very commendable. A statement by the Senator Andy Uba Governorship Campaign Organisation (SAUGCO), which was signed by the media and publicity secretary of the organisation, Hon Afam Ogene said: “For taking this patriotic step, in the face of daunting personal discomfort, this generation of ndi Anambra, and indeed Anambra children yet unborn, would remember the name, Dr. Nkem Okeke, as one who rejected the accoutrements of high office and elected to align with the people.”

Some members of the APGA who spoke on the political value of the deputy governor, have dismissed him, saying that the party, including the ward, community and local government where the deputy governor hails from are still intact, and would vote for APGA.

Special Adviser on Political Matters to Governor Obiano, Chief Ifeatu Obi-Okoye said: “The defection of the Deputy Governor, Dr. Nkem Okeke is politically inconsequential and non-sequitur to the fortunes of APGA either at his electoral ward , local government, or at the state level, come November 6, 2021. Evidently, Dr. Nkem Okeke’s drift to the APC is for personal pasture, more than any desire to serve the interest of Ndigbo. Whereas the APC may see him as a big catch, he remains a political paperweight in the politics of Anambra State.”

On his part, the Anambra State Commissioner for Information and Public Enlightenment, Mr. C Don Adinuba said that the defection of Okeke is unconstitutional.

Adinuba said that the deputy governor who was elected on a joint ticket under the platform of the APGA with Obiano in 2013, and had their mandate renewed in 2017, should follow the honourable path and resign from office.

Also, the Managing Director and Chief Executive Officer of Anambra Broadcasting Service (ABS), Dr. Uche Nworah, who is also the Spokesperson of Forum of APGA Political Appointees from Enugwu-Ukwu, said the forum and its members were not informed by the deputy governor that he was decamping.

“Like everyone else, we saw the viral pictures of the Deputy Governor, Dr. Nkem Okeke holding the APC flag at the State House in Abuja on Wednesday. We were disappointed because by virtue of his position in government, he is our political leader in Enugwu-Ukwu and Njikoka LGA and never hinted us that he was decamping. He is on his own in making that move. We are not in support at all. Enugwu-Ukwu and Njikoka will give their votes 100 per cent to the APGA candidate, Prof. Chukwuma Charles Soludo”, Nworah said.

Another indigene of Enugwu-Ukwu, Mr. Emeka Ozumba, the Deputy Chief Press Secretary to Obiano said; “We are disappointed that Dr. Nkem Okeke abandoned a joint ticket with Governor Willie Obiano in pursuit of personal gains. Every discerning Onye Anambra and indeed Njikoka and Enugwu-Ukwu know that he is completely on his own in making such a move. Thankfully, his decamping does not in any way affect the fortunes of APGA in the coming gubernatorial elections. APGA is still formidable in the four Wards of Enugwu-Ukwu.”

In a sharp reaction however, the Deputy Director, Media and Publicity Senator Andy Uba Governorship Campaign Organisation, Ikechukwu Emeka Onyia, tackled APGA and her members, saying there is no way a former commissioner for works, a two-term deputy governor can be dismissed as being inconsequential. He said the tag on the deputy governor by APGA members were borne out of pain.

“Now, if he was such a paper weight, how come he was chosen as running mate in Obiano’s first term, and still retained in the second? APGA should stop crying over their loss and deal with the reality of looming defeat.”

With less than three weeks to the state governorship election, a gale of defection seems to have hit APGA. Though the defection of Okeke to APC is one among the many horse-trading going on in the state, some members of APGA, who were known to be core members of the party and aides of Obiano have also recently defected.

While a former member of the House of Representatives, Hon. Ifeanyi Ibezi defected with a large chunk of the party’s members to APC, the PDP had taken its share of APGA membership with the recent defection in Asaba by some members.

Though APGA is known to be very dominant in Anambra State, how it will fare in the November 6 election with the gale of defections that have hit it has remained uncertain.