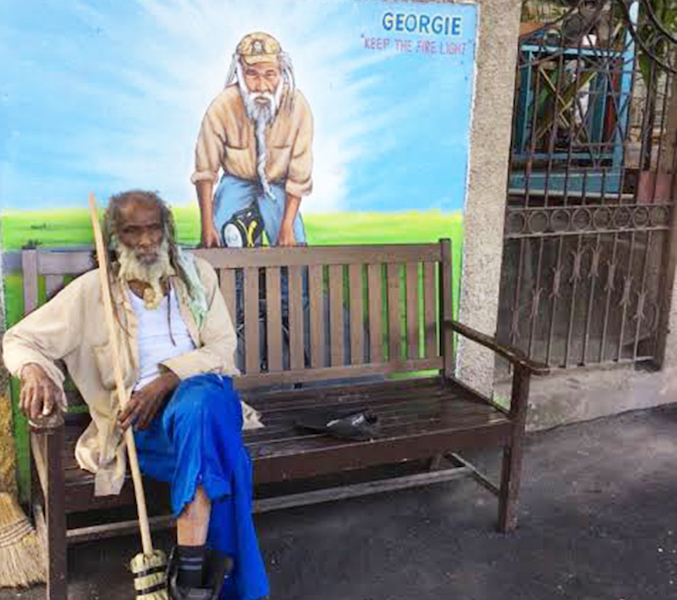 Surely, many dyed-in-the-wool fans of Bob Marley’s knew of “Georgie”. Yes, the “Georgie”, who featured in the late reggae musician’s 1974 hit song “No Woman, No Cry” – a song taken from the album Natty Dread by Bob Marley and The Wailers. In that song, listed on Rolling Stone’s 500 Greatest Songs of All Time, Marley had wailed soulfully: “Said I remember when we used to sit/ in the government yard in Trench Town. And then Georgie would make the fire light/ as it was log wood burning through the night.”

Georgie – real names, George Headley Robinson – was the man with the bicycle as well as one of the longest surviving members of the Bob Marley music clan. He remained a Marley’s faithful until his death on Wednesday, October 6 at age 84. That, probably, explains why his last known address was Marley’s old residence-turned-museum at 54, Hope Road, Kingston, Jamaica.

This was corroborated in a statement credited to the Bob Marley Foundation, which added that Georgie regalled guests with his fond memories of the reggae icon. Meanwhile, Marley’s daughter Cedella Marley, who heads the Tuff Gong Group of Companies, had confirmed the news of his passing in a tweet, announcing: “We lost our George who kept the [fire burning] all through the night. Rest well Georgie. Fly away home.”

Georgie, her step sister Sharon Marley Prendergast told the Jamaica Observer, “was definitely an extension of our father to us. I mean he spent so much time around Bob that he became part of us and I believe Bob left him here to take care of us and he did that so very well over the years and we must give thanks for all of that.”

No doubt, the octogenarian kept the fire burning by selflessly watching over the Marley clan. “He made the best fish tea,” Sharon resumed. “All we had to say wi coming and he would jump on his bicycle and head to Greenwich Town for the freshest fish when the boats come in. Then there was the cornmeal and sweet potato puddings… the best.”

Indeed, it could be said about Georgie that he Marley’s personal chef, who kept the fire on long after he was gone. Marley embraced the vegetarian diet and his meals needed to remain delicious, even with the shrinking options. It needed Georgie’s culinary expertise to achieve that.

Marley sang: “Then we would cook cornmeal porridge/ Of which I’ll share with you.” And for Marley, immortalising this kind gesture of Georgie in his song attested to the depth of his humanity and appreciation. Who wouldn’t need a Georgie in his life? A person who keeps the fire lit in both literal and figurative sense.

Georgie relished his role as a cultural custodian and historian for the famed reggae icon while he lived at Marley’s home in Jamaica. Besides being remembered for his great cooking skills – his cornmeal porridge, referenced in “No Woman, No Cry” was said to be Marley’s favourite – he was a walking library since the time when Marley’s feet “was his only carriage.”

With an absentee father and a humble background, Marley and his mother sought after a better life away from Jamaica in America. When his music career blossomed, Marley bought a house and the likes of Georgie moved in with him. There are no records to show whether Georgie had any wife or children other than Marley’s who have paid glowing tributes to his memory on the social media platforms. Thus, Georgie’s passing-once again- illustrates line five of the first verse of the song which reads: “Good friends we have/ Good friends we’ve lost along the way.”

No one knows the cause of Georgie’s death even though he was known to have ill for some time.