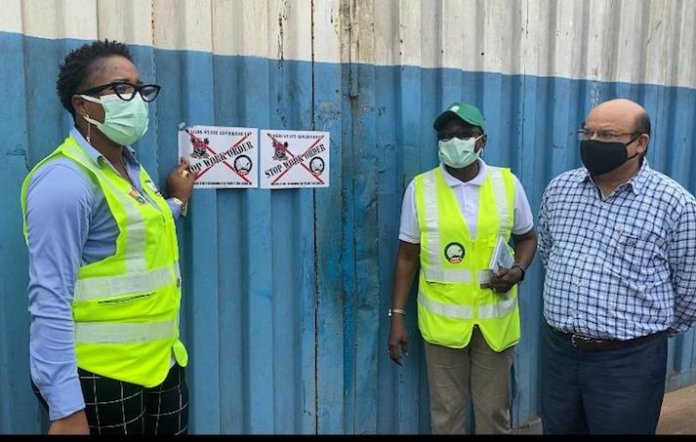 Chiemelie Ezeobi reports that the Lagos State Environmental Protection Agency, in line with its watchdog role, recently uncovered an illegal scrap yard in Ikorodu that was a gateway for nefarious activities such as storage of unwholesome processed foods, repackaging of drugs and juice drinks, improper destruction of expired drugs, chemicals, recycling of metals as well as dismantling of electrical and electronics waste

The Lagos State Environmental Protection Agency (LASEPA) is saddled with the job of ensuring the state and its residents adhere to environmental laws, all targeted at protecting the environment.

On a recent mission to fulfill this, the agency recently unearthed an illegal scrapyard in Ikorodu where nefarious activities such as storage of unwholesome processed foods, repackaging of drugs and juice drinks, improper destruction of expired drugs, chemicals, recycling of metals as well as dismantling of electrical and electronics waste, were carried out within a residential area and without relevant state permits or environmental controls.

Initial Discovery
After the initial discovery at the scrapyard, LASEPA General Manager, Dr. Dolapo Fasawe,
while warning property owners to desist from letting out their facilities for illegal activities contrary to personal use, said the agency received anonymous call from concerned residents about the unfriendly environmental activities taking place at Salvation Avenue, off Owode Onirin, Ikorodu, and negative attendants on the lives of residents if not timely curbed.

She said:” Our team, on first visit were refused entry and could not access the property due to strong resistance from the security guards who claimed the premise was a private property and unavailability of occupants at time of visit.

“Our conducts are guided by world best practices and thus, posted an abatement notice, to invite the property owner or concerned person, which was flagrantly ignored.

“We however discovered during our second visit, that the building, which sits atop an expanse four plots of land with unknown address, housed an illegal scrap yard that engages in nefarious activities such as storage of unwholesome processed foods, repackaging of drugs and juice drinks, improper destruction of expired drugs, chemicals, recycling of metals as well as dismantling of electrical and electronics waste within the premise.

“It’s worrisome to note that people operate unlawfully in a residential environment unchallenged by neighbours. Individual selfish interests must not be allowed to supercede communal benefits. We must be mindful of who we are allowing into our neighbourhood and consequences of our actions on the society.”

What the Law States

The LASEPA boss added that it was pertinent to note that all expired drugs, chemicals as well as e -waste materials must be treated and recycled in a sustainable environment before disposal into the environment “to protect our earth, from man-made disaster, report all unlawful conducts to the authority for timely intervention”.

According to her, the Lagos State Environmental Management and Protection Law of 2017. Section VI, sub sections 181, 182,183 185 prohibits individual or group from discharging into the environment any untreated waste or chemical substances listed in any Federal and State law in force, except by regulations made under this law and Federal law.

The LASEPA boss added that the law empowers the agency to use the provision of the law on flagrant polluters, even as she enjoined all e-waste recycling operators to ensure they are registered and accredited by her agency as there would be no hidden place for illegal operators in the state.

More Toxic Waste Uncovered
In a follow up raid, the agency in collaboration with the National Agency for Food and Drug Administration Control (NAFDAC) apprehended four persons for tampering with evidence. This is just as they sealed off the scrapyard.

The joint raid further unearthed more toxic waste as they promptly halted all activities on the site by placing a LASEPA stop work order. Of the four persons arrested, two were those previously stationed as security men of the yard. They had attempted to destroy previously established evidence by gaining access to the sealed site illegally (over the fence). They further attempted to destroy evidence by arson.

The facility Manager, FC Afara, and Alhaji Kolawole Hamzat, the alleged owner of the expired drugs (paracetamol, ginseng multivitamin cleansers) were taken into custody by NAFDAC for further questioning.

According to LASEPA CPAO, Bola Ajao, the government officials combed through the facility and found large quantities of artificial sweeteners and flavors, biohazardous waste including used needles, syringes, nose masks disposable hand gloves and apparels amidst the squalor.

Reacting to the incident, LASEPA GM described the exercise as a purposeful collaboration between sister agencies and commended the investigative team for exhibiting high level of professionalism in the management of the case.

She said “The two agencies involved are both saddled with the responsibilities of safeguarding public health and promoting quality of life in a sustainable environment. These activities affect all of us, we all breathe the same air, drink the same water, and eat food from the same soil. If these activities go on unchecked, the state would be in a huge environmental and food safety crisis.”

She further lamented that it is indeed disheartening to note that the Lagos State residents, the security men in question, scaled the fence of a government sealed property and set on fire the evidence unmindful or unaware of the potential and profound environmental effects such a release to air, land and water from such a fire would lead to or the potential for a large fire outbreak and resultant loss of life and property.

“Any such operation stopped reduces the state’s mortality toll of 11,200 annually attributable to poor air and environmental quality. Therefore, the aim of this exercise is not to witch hunt or hamper any business activities, rather LASEPA aims to guide and regulate all business activities in the state to consider the people, planet, and profit collectively and as a mutually inclusive requirement, prior commencing any business activity or service.”

Harping that the state would be swift and decisive in safeguarding and upholding the rights of all Lagosians over and above perceived economic gain, the LASEPA boss sounded a stern warning to other illegal operations in and around residential areas to desist.