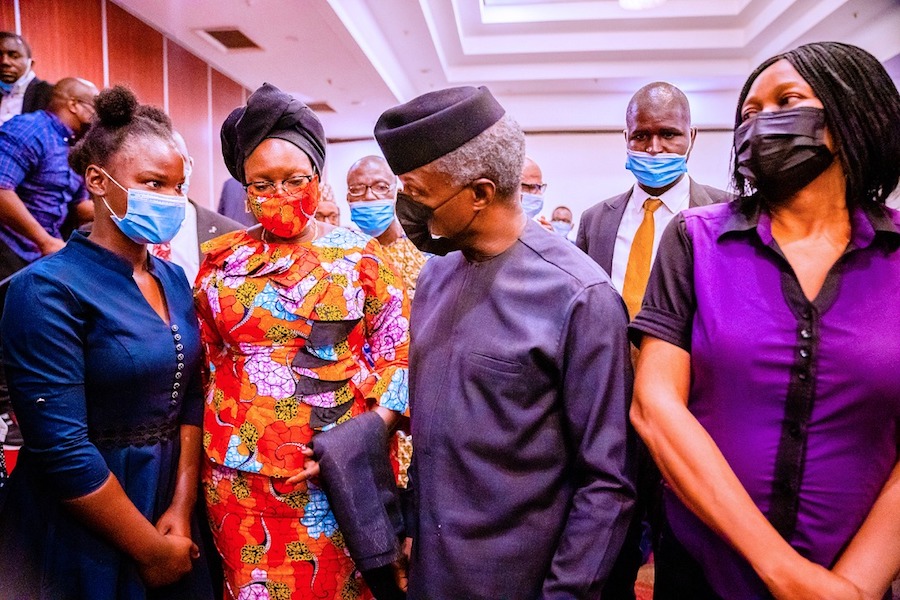 Vice President Yemi Osinbajo has declared that the Federal Government will ensure that no Nigerian child is denied access to basic education.

Osinbajo, who spoke on Tuesday in Abuja at the National Dialogue Forum on the Girl-Child in Nigeria, themed “Towards A Girl-Friendly Nigeria” highlighted the efforts of the Buhari-led administration in the area of improving access to education for the girl child in Nigeria.

According to him, the Federal Government has committed in word and deed to education so as to ensure that no child is denied access to free basic education.

He said: “We believe that free and compulsory education of girls is game-changing in many respects, as it has been empirically shown to positively impact age of marriage, and even maternal and infant mortality”.

The Vice President fuurther stated tgat in 2020 the Federal Executive Council approved a World Bank credit facility in the sum of $500 million to finance the Adolescent Girls Initiative for Learning and Empowerment Project, to improve secondary education opportunities among girls in targeted areas of participating States, which are Borno, Ekiti, Kaduna, Kano, Katsina, Kebbi and Plateau.

The project, he saud, is aimed at creating safe and accessible learning spaces, advancing an enabling environment for girls, and strengthening the institutional capacity of the Federal and State governments to support girls’ education and empowerment.

According to the Vice President, the project, which targets girls between the ages of 10 to 20 years with a strong focus on disadvantaged adolescent girls, has so far benefitted over 6 million girls and boys.

Osinbajo explained that the Buhari administration will continue to put the needs of the girl-child in Nigeria at the forefront of laws, policies and practices to ensure their safety, education and health.

He highlighted ongoing efforts of the Buhari administration to improve the welfare of the girl child in Nigeria, including the enactment of the Child’s Right Act of 2003, and more recently, the Violence Against Persons Prohibition Act of 2015.

While calling for more action from State Governments to ensure the domestication of these Acts in the States, Osinbajo said the National Economic Council (NEC) which he chairs, is working with the States to ensure their adoption.

“We have made a point of working with the States to ensure that they adopt these Acts in their States. This led to the creation of the Human Capital Development (HCD) unit as a special NEC project headed by a special adviser to track implementation of relevant policies”.

He also urged State Governments to be more proactive in addressing issues related to the girl-child.

“While the Federal Government must remain focused and committed to advancing effective approaches to keeping girls safe, most of the efforts will occur at the State and local government levels.

“Gender-responsive measures that will transform education systems and address the barriers inhibiting girl child education must be introduced in States. And we are committed to ensuring that these initiatives happen,” Osinbaho assured.

He then noted the impactful steps taken by the Rule of Law Advisory Team in the Presidency towards achieving a strong justice response system in supporting women and girls.

“Since 2016, the Rule of Law Advisory Team in the Presidency has been taking a range of steps. We have formed strategic partnerships with relevant stakeholders, local and international, including the European Union Rule of Law and Anti-Corruption Programme, the Open Society Initiative for West Africa, The Cans Foundation and Ford Foundation, all of whose commitments have proven valuable in supporting our efforts to succeed.

He explained that in 2019, the President directed the National Human Rights Commission to set up a special panel to investigate cases of unlawful arrests, assault and Sexual and Gender-Based Violence in the Federal Capital Territory following complaints of raids of night clubs and arrests of women by the Police.

In the same vein, the VP emphasized the importance the Buhari administration places on ensuring that women have significant representation in government programmes, including the Social Investment Programmes (SIPs) and Economic Sustainability Plan (ESP).

“From 2015 we have ensured that Government’s social and entrepreneurial programmes have an affirmative component for women. Of the 2.4 million beneficiaries of the Government Enterprise and Empowerment Programme (GEEP), 1.2 million were women; that is 56.4% of beneficiaries. A total of N38 billion in loans has been disbursed over the last four years.

“Of the 1.1 million beneficiaries of the Conditional Cash Transfers (CCT), about 1million are women – over 98% of beneficiaries. For our youth employment programme N-Power, of the 526, 000 employed, 40.4% are female,” he stated.