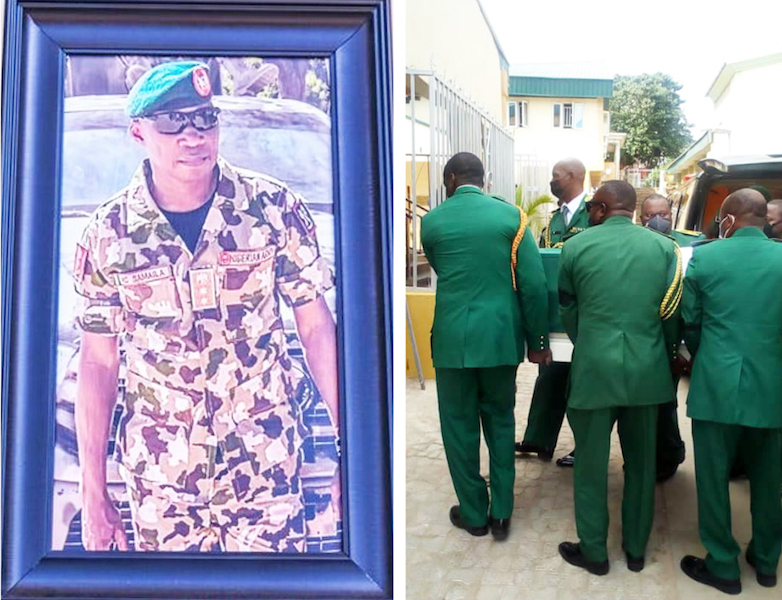 The remains of Colonel Husseini Samaila Sankara, who died from injury sustained, when he and his team stepped on an explosive device planted by Boko Haram terrorists in Borno State, were laid to rest last Thursday in Abuja. Sankara, who was Commanding Officer, Chief of Army Staff Intervention Battalion Operation, under the ongoing Operation Hadin Kai in the North-East, was buried at the Guards Brigade Cemetery. Seven soldiers died instantly after the incident while four others, including the late Colonel, were severely injured.

The late Sankara was on his way from Marte, a town in Borno State, to Maiduguri, when their gun truck ran into the explosive. Family members, colleagues and friends, who attended the funeral service of the late officer at the Military Church in Mogadishu Cantonment, Abuja, before proceeding to the cemetery, recalled the last moments with Sankara and paid him glowing tributes.

Shehu Jafiya (Turakin Uba), the elder brother of the deceased, said the senior officer had told his family that his mission was accomplished, ”not knowing he was talking about his mission on planet Earth.” According to him, the late senior officer would be happy in heaven if he sees an end to insurgency, ethnic agitation and enthronement of a united Nigeria, while recalling that Sankara was flown into Abuja on June 4, 2021.

Recalling his last moments with Sankara, Jafiya said: “After the blast in Borno State around Dikwa and Marte. He was first flown in an helicopter to Maiduguri where he was stabilized at the military facility, then they moved him to Cedar Crest Hospital in Abuja.

“I was at the airport to receive him and we had very extensive discussions not only one day but progressively over a week. He kept assuring us that we should not cry or be too worried that he was going to be fine. We didn’t know he just wanted to console us by saying we should not be too worried and not cry for him. My last moments with him we’re indeed emotional and painful to us.

“We thought he was referring to the mission in Borno. He was being very prophetic so, we didn’t understand him then. He was very committed to his family. I mean his wife, children and we the brothers. He was easy-going and he had a very deep passion for the military job. He was so proud of it and that was why in the house, we christened him ‘Sojaman’.

“One other thing he always he treasured was his love for this nation. Whenever we sat to discuss, you will hear him saying that he will do anything for this country. All these while, we didn’t understand what he was talking about. That doing everything, he was ready to die for this country and it eventually manifested. So it happened eventually so that is it.

“Looking at things in the country, the first thing that will give him joy in heaven is for us to defeat this insurgency. He will want to see his family settling down as quickly as possible, so that they won’t feel the pain of his exit too much just as the preacher said in the church.

“He’ll want to see them move on and all agitations in the country today for Sankara who is a deep and passionate lover of Nigeria, he’ll want nothing but unity.”

Reading his citation at the grave yard, Colonel Adebayo Lawal described him as an “articulate, dedicated, loyal and hard-working officer.

“He was calm, firm but fair with a good sense of purpose and responsibility. He was a forthright gentleman and a professional intelligence officer who was genuinely committed to his duty. He had a remarkable conduct and overwhelming moral standard.”

Colonel Lawal said the senior officer, who was of the Nigerian Army intelligence corps, rose to the rank of colonel on September 3, 2020.

“Before his demise, he was the Psychological Operator at the Theatre Command Operation Hadin Kai. He was until his demise the Commanding Officer, Chief of Army Staff Intervention Battalion Operation” Col Adebayo added.

On his part, Adamawa State Governor Ahmadu Umaru Fintiri condoled with the family of Shehu Ijafiya over the loss of his brother.

Governor Fintiri described the late Colonel Samaila as a brave soldier who sacrificed his life for the peace of Nigeria and will be remembered as a peace advocate.

The Governor urged the family to take solace in God knowing that their son died serving the nation. He said Colonel Samaila will be greatly missed.