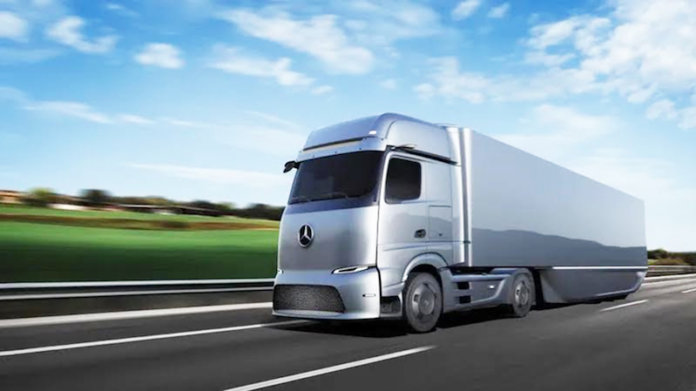 Volvo and Daimler have now partnered to speed up the transition away from diesel trucks and towards fuel cell electric vehicles in the European Union.

According to JALOPNIK, they established a joint venture called Cellcentric to develop fuel cell powered heavy trucks and their projections for this diesel to FCEV shift predict a very fast pace, maybe too fast. It could be a big shift, though. If they get it right.

The joint company expects to begin production of the hydrogen-powered trucks by 2025, after which it claims demand for FCEVs will take off. In a statement to the Financial Times, Daimler said diesels will begin to lose market share soon:

Martin Daum, chair of industry leader Daimler Truck, told the Financial Times that while diesel trucks would dominate sales for the next three to four years, hydrogen would take off as fuel between 2027 and 2030 before going “steeply up”.

So, two years after production starts, Cellcentric expects that the demand for FCEVs will be there, and the three year window Daimler claims actually aligns with the timeframe that Volvo had set for increased sales of its electric trucks, including both BEVs and FCEVs, per the Financial Times:

The Swedish truckmaker is aiming for half its European sales in 2030 to be trucks powered by batteries or hydrogen fuel cells, while both groups want to be fully zero emissions by 2040.

But it still feels like the shift the two companies — now partnered into a single company — are claiming here is a little quicker than what is possible.

Heavy trucks would make perfect candidates for the transition from diesels to FCEVs, but the infrastructure is just not there yet, and Cellcentric is making optimistic claims about the ability of that infrastructure to manifest within their timeframe.

Of course, these two companies make up a huge portion of the heavy truck industry in the EU, so if anyone could make halfway decent predictions about that segment it would be Volvo and Daimler, but even they know it’s uphill with hydrogen infra being what it is.

The Financial Times quoted Martin Lundstedt, the CEO of Volvo Group, about the need for hydrogen infrastructure growth. About 300 high-performance hydrogen refuelling points would be needed in Europe by 2025 and 1,000 by 2030, the companies said. Of the need to build the infrastructure at the same time as the trucks, Lundstedt said: “It can be seen as a chicken and egg. But we have said we will go for it. We will deliver the chicken. Someone else can deliver the egg.”

So, while it could very well be the case that these incredible fuel cell powered heavy machines could see production in 2025, and increased sales shortly after but the question is still going to be: Will the hydrogen be there to refuel them? (Source: JALOPNIK)