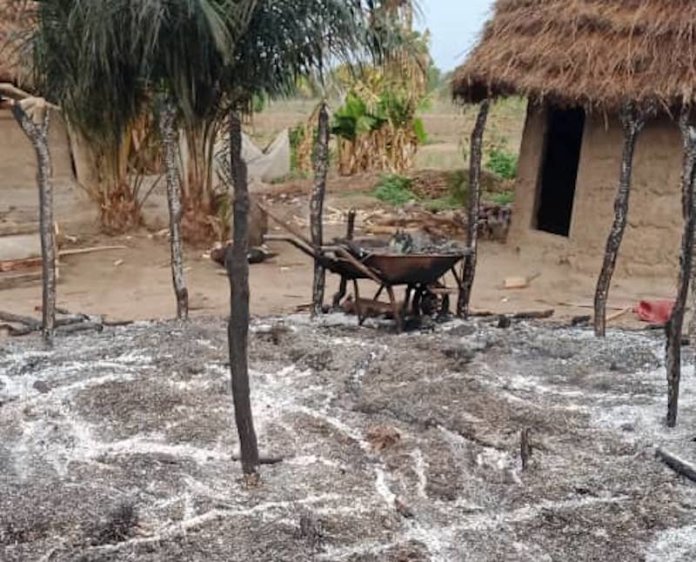 Local government areas of Doma and Keana in Nasarawa State have come under siege of bandits suspected to be herdsmen, whose stock in trade is to invade the Tiv communities, kill the farmers and villagers, as well as displace the living from their ancestral homes, reports Igbawase Ukumba

The rise in insecurity in the local government areas of Doma and Keana in Nasarawa State could be attributed to the influx of persons suspected to be bandits, masquerading as herdsmen, to the council areas as a result of their displacement from other parts of the country.

Unfortunately, the evil men seem to be enjoying some degrees of patronage and support from their local collaborators in the communities, thus worsening the situation.

Consequently, on April 23, 2021 suspected herdsmen launched a coordinated attacks on Tiv farming community of Ajimaka, in Doma Local Government Area of Nasarawa State, killing 14 Tiv farmers, who included majorly women and children. This was even as several persons were declared missing, while scores sustained various degrees of injuries as houses belonging to the Tiv farmers were burnt by the bandits during the invasion.

Also, the militia herdsmen also circulated quit notices to the Tiv farming community in the two local government areas of the state to vacate the axis or face total annihilation. The threat led to the displacement of over 50,000 Tiv farmers from their ancestral abode from the two LGAs.

The suspected militia herdsmen, who were said to be carrying sophisticated weapons, invaded the community at about 2:00am of that fateful day, shooting sporadically, killing majorly women and children despite their efforts to scamper to safety during the invasion. An eyewitness gave names of some persons massacred during the attack to include Tsekaa Chiatyo (m), Kwaghdoo Tsekaa (f), Sewuese Tsekaa (f), Bobo Chiatyo (m), Aondoseer Fidelis (m), Aboyi Aduku (m) and Mwuese Aseer (m).

Consequent upon the Ajimaka massacre, the Governor of Nasarawa State, Abdullahi Sule, condemned in strong terms the brutal killings of women and children during the attack on Ajimaka village by the gunmen. In a statement signed by Governor Sule’s Chief Press Secretary, Ibrahim Addra, Sule was quoted in the statement as describing the act perpetrated by the gunmen as reprehensible, callous and inexcusable.

The governor said: “An attack that does not spare women and children bears the trademark of devilish elements who are bent on truncating the relative peace in the state.”

Sule however assured that security operatives have since commenced investigations that will expose the criminals with a view to punishing them according to the laws of the land.

“My condolences and prayers are with families of those whose lives were lost. I urge them and the rest of our citizens to be rest assured that this
administration will do all within its power to ensure justice, peace and security across the state. I therefore call for calm and support to law enforcement agents in the collective fight against evil.”

In the same vein, President of Tiv Development Association (TIDA) in Nasarawa State, Comrade Peter Ahemba, confirmed the incident, while speaking with journalists in Lafia, describing the attack as unprovoked and unfortunate.

He regretted that the attacks on the Tiv people of the state, particularly those living at the border areas between Benue and Nasarawa States have become a recurrent decimal despite efforts by the Nasarawa State Governor, Abdullahi Sule and his Benue State counterpart, Samuel Ortom to ensure lasting peace on the borderline of the two states.

“Each time the herdsmen have issues relating to implementation of the anti-open grazing law by the Benue State government, they come and attack our (Tiv) people in Nasarawa state. We are indigenous Tiv people of Nasarawa State. We are peace-loving people and the herdsmen must stop attacking our people for things they know nothing about,” Ahemba said.

The Tiv leader lamented that the ugly development has led to the displacement of thousands of Tiv farmers in the area, regretting that the incident was happening at a critical time farmers were set to commence the current farming season. While acknowledging efforts by the Nasarawa State government to ensure peace and security at the border areas of the state, the TIDA President appealed to the state government to direct deployment of security operatives to the trouble area to forestall further breakdown of law and order.

He however called on the Tiv people of Nasarawa State to remain calm and avoid taking laws into their hands despite the unprovoked attack as the state government was taking measures to restore normalcy in the affected areas.

When the Nasarawa State Police Command was contacted over the killings earlier, the Police Public Relations Officer of the command, ASP Nansel Ramhan, said the command was yet to receive any report on any occurrence of such an incident from the area. However, later in the day the command came up with a press statement which the Commissioner of Police, Bola Longe, said the police received a report about the attack around 6:00a.m on Saturday and immediately mobilised personnel to tackle the situation.

In the statement signed by the Command’s Police Public Relations Officer, ASP Ramhan Nansel, on behalf of the state Commissioner of Police, read: “On 24/4/2021 at about 0600hrs, information was received on same date that at about 0100hrs, unknown assailants attacked Ajimaka village situated at Nasarawa/Benue boundary, Doka district of Doma LGA. Upon receipt of the information, a joint team of police and military personnel were deployed to the scene, where nine corpses were recovered; each with multiple machete cuts.”

The statement further said the CP had directed the Deputy Commissioner of Police in charge of State Criminal and Investigation Department (SCID) to move to the area and conduct a comprehensive investigation to unravel the mystery behind the attack and arrest the perpetrators.

Sadly, despite deployment of the joint team of police and military personnel to the crisis area, as well as the drafting of the Deputy Commissioner of Police in charge of State Criminal and Investigation Department, reports had it that killings of the Tiv farmers and burning of their houses continued unabated.

Hitherto, the number of persons killed by the suspected herdsmen in the state was reported to have risen to 14 persons as confirmed by chairman of the Ate U Tiv Unity Forum, Bernard Ikyeghna, to THISDAY. He explained that apart from the 11 persons that were massacred in Ajimaka in Doma LGA of the state, two other deaths were recorded in Keana Local Government Area of the state from different attacks which an elderly man was macheted and was receiving treatment in one of the hospitals in the state.

According to the Chairman of the Ate U Tiv Unity Forum, “in Keana Local Government Area, one Sabastine Agbaka, an undergraduate of the Nasarawa State University, Keffi was murdered in the Kadarko axis of the council area. Also in Dooshima village, Fidelis Abanka was declared missing when gunmen stormed the area, this was just as at Shatse village, Andrew Yough is lying critically in a hospital as the killer herdsmen attacked him.”

It was also gathered that a senior staff with the Doma Local Government Area was also reportedly murdered by the suspected herdsmen while going to work from his abode to the council area’s headquarters in Doma.

As there was reported sustained attacks on Tiv farmers’ settlements by suspected militia herdsmen in both Doma and Keana Local Government Areas of the state, no fewer than 50,000 Tiv farmers in about 13 village settlements were reported to have been displaced from their ancestral homes in Nasarawa State. The displaced Tiv settlements were Dooshima, Antsa, Dooka, Angwan Yara, Ikyayior, Targema, Tse Tor, Chia, Umurayi, Dooga, Gindan Rai, Ajikamaka and Ankoma all in Ekye Development Area of Doma South in Doma local government area of Nasarawa State.

Speaking to journalists during a visit to Kadarko town where some of the Tiv farmers were taking refuge, the Nasarawa State TIDA president, Comrade Peter Ahemba said the situation was so pathetic as can be seen by all. He continued that the people were in very deep pains as they were displaced as a result of the crisis in Doma South.

He also appealed to them to remain calm as the state Governor, Abdullahi Sule, would respond immediately to their plight to ensure that peace returned back to their various communities.

An elderly man, Mr Cletus Wanshima, who was among the displaced persons from Ajikamaka village, told our correspondent at the Kadarko Internally Displaced Persons (IDPs) camp that they woke up on that fateful Saturday to the attack on them by the herdsmen.

“They just lay ambush on our people and started killing them. So we have to run for our lives. They have taken over all our houses and are burning and looting our valuables. They invaded our communities matcheting people with cutlasses and gunning down others with their AK-47 guns. They slaughtered a woman in Doka village in my presence, they also slaughtered a man in Ikyayior village,” Elder Wanshima recounted.

He however lamented the terrible condition in the IDPs camp and called on the government of Nasarawa State and as well as well to do spirited individuals to come to their support.

Wanshima said: “We are faced with the problem of feeding even as we sleep on bare floor since our arrival in the camp. We don’t have mattresses or mats. It is quite a difficult situation as we are exposed to mosquitoes and all kinds of insects and reptiles during the day and night.”