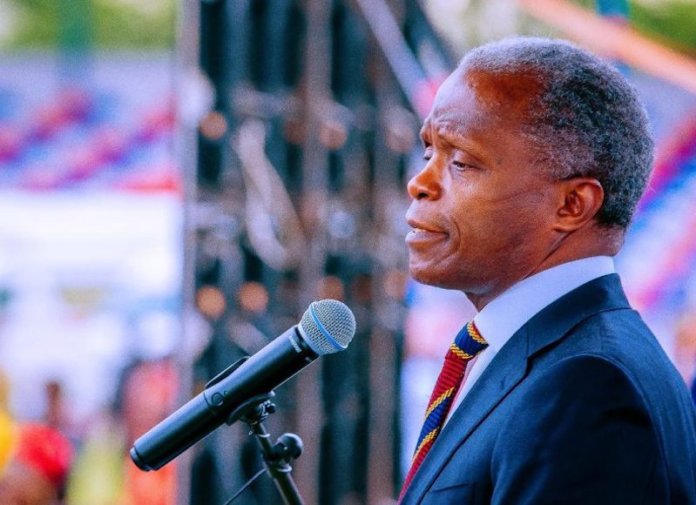 Vice-President Yemi Osinbajo has appealed to Nigerians agitating for the fractioning of the country to jettison such divisive tendencies but join hands with the Federal Government to build a more united and stronger country.

The vice-president inaugurated the FRSC complex, which was built and fully equipped with state-of-the-art facilities and furniture by the Delta State Government, at a ceremony that was attended by eminent personalities including top-ranking state and federal government functionaries as well as traditional, religious leaders.

The FRSC complex has an administrative block and an auditorium as well as lecture rooms, male and female hostels, residential apartments, a cafeteria, a medical clinic, a driving range and a football field.

Declaring the training school open, Osinbanjo harped on the importance of “robust partnership between the states and the Federal Government”, saying that it would engender the desired sustainable socio-economic development of the country.

Osinbajo stressed the need for harmonious relationship among the different sections of the country, urging those fanning the embers of discord and disunity in the country to rethink such divisive actions in the interest of peace and unity.

He noted that Nigeria remained a great nation because of its diversity irrespective of its present security and other challenges, adding that Nigerians should harness the inherent benefits in the nation’s diversity to promote to stand the nation our among the comity of nations.

Osinbajo said, “We must caution those who are agitating for the breakup of the country against such agitation. It is important for our people to understand that the unity of this country must not be compromised.

“What is important is that we must continue to promote justice, equity and fairness among the diverse groups (ethnic nationalities) in the country.
“The greater the cooperation between states and the federal government, the greater the development that Nigerians would witness.

“This far-sighted contribution of the Delta State Government is worthy of all commendation and it’s an excellent example of the collaboration between state and the Federal government.

“The ultimate beneficiaries of the project are the people of Delta and of course, the country at large. I must encourage all other states to emulate what Delta has done and exemplify this spirit of cooperation for development.

“The Federal Government will continue to support organisations that demonstrate commitment to their statutory duties. Let me again appreciate the Delta State government for the huge financial resource invested in this project.”

In his remarks, Governor Okowa expressed delight at the good working relationship between Delta State and the Federal Government, saying the FRSC training school was a product of the cordial relationship, stating that importance of a well-trained road safety corps marshal on road safety standards and safe-driving practices in the country could not be overestimated.

The state government did not count the cost of building the FRSC training school complex when the state’s sector command of the FRSC approached him in December 2019 for assistance to acquire a piece of land for the purpose as the government considered the overall benefits to the people of the state and Nigeria in general could not be quantified.

In the state government’s determination to open up the state towards boosting social and economic activities, the administration has provided at least 483 roads across the state most of which have been inaugurated in the recent past, the governor stated.

He took the opportunity to list the various intervention programmes of his administration, saying that youths were the target of the various entrepreneurial and empowerment schemes including different agricultural and technical skills acquisition schemes under the state’s Job and Wealth Creation Office.

Okowa said, “In 2019, the FRSC intimated me of their plan to establish a Marshal Inspectorate Training School (for non-commissioned officers) in Delta State on the condition that the state government will provide a safe, functional and adequate campus for its take-off.

“We knew the project would stretch our already limited resources but we were also confident that, in the final analysis, the benefits of locating the school in our state far outweighed the costs.

“It is also our pride that through this project, the Delta State Government is able to contribute in a significant way to the overall improvement of road safety in Nigeria.

“Our administration will continue to avail itself of any opportunity to improve road and physical infrastructure, grow the local economy, especially the informal sector, create employment opportunities and advance the general well-being of our people, while contributing our quota towards the advancement of “Project Nigeria’.”

In his remarks, the Corps-Marshall and Chief Executive Officer of FRSC, Dr. Oyeyemi Boboye, commended Delta State Government for building, equipping and handing over of the special training school to the road safety commission.

He said that the successful inauguration of the training institute, which the Okowa government completed in barely 18 months, would add value to human capital development in the Corps.

Earlier, the Owa monarch, Dr. Efeizomor II, who is also the chairman of the Delta State Council of Traditional Rulers, expressed delight at the visit of the vice-president to his palace kingdom and palace, thanking God for the cordial relationship between Governor Okowa and the Vice-President Osinbajo despite their different political party affiliations.

HRM Efeizomor II, who could not hide his excitement when the vice-president paid him a courtesy visit in his palace at Owa-Oyibu, the administrative headquarters of Ika North-East, described Prof. Osinbajo as “a great ambassador of peace, a professor of high repute”, saying that “Nigerians are happy about your contributions to national development”.

The Owa monarch assured that the people of the state “will continue to work for the peace and unity of the country.”

The state commissioner for Information, Charles Aniagwu, who had a day earlier taken newsmen on a facility tour of the FRSC complex preparatory to Thursday’s inauguration, noted that the successful completion of the project, which commenced a year ago, was another testimonial of “Governor Ifeanyi Okowa’s desire to build sustainable infrastructure for a Stronger Delta.”