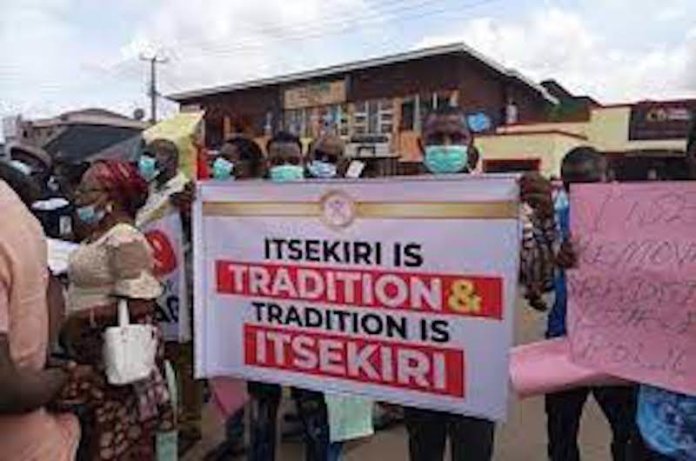 Hundreds of Itsekiri indigenes yesterday afternoon, stormed the Assistant Inspector General (AIG) of Police Zone 5 in Benin City where they protested continued police involvement in the crisis rocking the Olu of Warri stool and requested that the police should allow all the chiefs go back to Warri and resolve the issues amicably.

The Itsekiri protesters bearing several placards and inscriptions, said the continued insistence that police should resolve the issue was a let-down on the custom and tradition of Itsekiri.

One of the leaders of the protesters, David Iwere said: “We are here as Itsekiri people. We are tired of our matter being in the media all the time, what is happening in Itsekiri has never happened before. We are here to appeal to the AIG to send all the chiefs home and give them time to come back and report the settlement they have made.”

Also speaking, another leader, Mrs. Okhere Amaju said “We are here as group, we want peace, we are tired of crisis. We have come to appeal that they should take the matter back home and we can settle ourselves. Itsekiri issue is not for the police. We are a people with culture and tradition, we need to go and resolve our issues at home. We need peace in Itsekiri.”

Corroborating the above positions, Samuel Khalil appealed to all the chiefs and the ruling house to give peace a chance while on his part, Scott Anwani said, “We have gone round to most of the chiefs in Warri kingdom and other stakeholders who are involved in all these issues.

We have met one on one letting them know why we must ensure that there is peace in Itsekiri nation. They are our leaders, we are not supposed to be divided; the Ologbotshere, the Iyatsere, the Uji, Uwangue, the ruling house, the chiefs, they should all come to a round table and resolve this matter and make peace so that we can be happy.

Responding, the Zone 5 Police Public Relations Officer, Tijani Momoh, said the request of the demonstrators would be conveyed to the AIG and whatever directive he gives would be communicated to back to them.