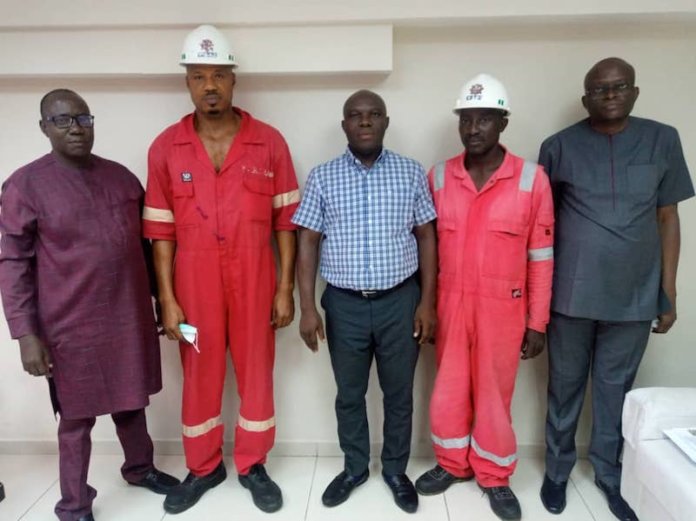 The management of Niger Biscuits has been lauded for its timely intervention in the recent fire outbreak that gutted Ibru Jetty extending into THISDAY press hall.

Managing Director of THISDAY Newspapers Limited, Mr. Eniola Bello, said during a thank-you visit to the company in Apapa, Lagos that the quick intervention of the management in deciding to mobilise its firemen, including its firefighting assets, went a long way in mitigating the damage that the fire would have caused.

Bello, who was accompanied on the visit by the Divisional Director, Finance, Mr. Peter Iwegbu; and Managing Editor, Mr. Joseph Ushigiale, described the company’s quick intervention as the “action of a good neighbour.”

He said the visit was to tell the management of Niger Biscuits: “We appreciate highly your quick intervention in deploying both your firemen and assets to fight the fire that broke out from the Ibru Yard. We don’t know what would have happened without your timely intervention. You have demonstrated that you are a good neighbour.”

Responding, the Executive Director of the company, Mr. Femi Akinnirun, expressed his appreciation for the visit, stating: “You don’t have a choice other than to respond quickly when it is a fire incident because it doesn’t give any notice.”

He stated that as soon as the fire was brought to his notice, he raced to the spot to assess what could be done, adding that he did what he did in reciprocity.
Akinnirun said: “I was in court playing lawn tennis when I was informed of what was going on. I quickly abandoned the game and raced to the scene manoeuvring between trucks that had already blocked the road.

“When I got to the office and took a quick study of the scenario, I called and mobilised our firemen and assets to engage the fire through THISDAY premises. I had to do what I did because I remember in 2016 when we also had our own unfortunate fire outbreak, THISDAY came to our rescue.

“In fact, given the difficulties we encountered positioning the fire trucks to fight the fire your management graciously permitted us to break down a portion of the wall so that firemen and equipment would gain access.”

He stated that initially, the severity of the fire was not known until one of the floors crumbled, causing the conflagration to spread to the rest of the building, including THISDAY press hall.

Akinnirun said the development compelled him to call the attention of men of the Lagos State Fire Service who were unaware of the spread to THISDAY premises, adding that “when they came with their more sophisticated fire equipment and with our own hose, we were able to effectively put the fire under control.”