The most foolish thing I have read this year is the utterly ridiculous defence of the Minister of Communications and Digital Economy, Dr. Isa Pantami, by the Buhari Presidency.
That statement, by Garba Shehu, the ‘Any Government In Power’ former spokesman to a Peoples Democratic Party government, is only bested in its stupidity, by the August 2017 statement by the same shameless Garba, that the President was working from home after his over 100 days medical tourism to London, because ‘rats damaged his office’.

The idea that Pantami was a juvenile and did not know what he was doing between 2010 and 2015 is just the type of outlandish and Goebbelsian Taqiyya that we have come to expect from the Buhari regime. In 2014, the All Progressives Congress called for my arrest as one of President Jonathan’s spokesmen. Pantami is older than me.

And then we have the statement by Sheikh Gumi, the same man who told bandits that the soldiers who kill them are Christian soldiers, and not Muslims, and now says, “Get more people like Pantami and put them in power”. Can Nigeria ever defeat her insecurity challenges with people like these around?
It beats my imagination that this administration surrounds itself with people like Garba Shehu, Sheikh Gumi and Bola Tinubu and still expects that any good thing can come out of their government.

That is why Oluremi Tinubu (my kinswoman) showed how very little the All Progressives Congress cares about Nigeria, when she called Senator Smart Adeyemi a ‘wolf in sheep’s clothing’, simply because he gave up the pretence, stopped toeing the party line, and spoke the truth about the sorry state of insecurity in Nigeria that has seen our beloved country become the most insecure nation in Africa.
And yet, we have people in Nigeria warning that if care is not taken, Nigeria may soon become like Somalia. Oh foolish Nigerians. So you do not know?

In reality, those saying Nigeria may soon be like Somalia if care is not taken, should apologise to Somalia. According to the Global Terror Index, Nigeria is now worse than Somalia.

Nigeria is the third most insecure nation on Earth, according to the just-released Global Terror Index. Somalia is the fifth. And we have people saying we should not be like Somalia. Wake up and smell the coffee! That ship has long since sailed away.

It is not us that should pray not to be like Somalia. It is Somalia that should pray not to be like us. One hundred people were killed nationwide by Boko Haram, bandits and killer herdsmen in one day, and when Garba Shehu was asked to comment about this, he said, ‘is this the first time that we have had killings?’ And you think Nigeria is better than Somalia? Life in Nigeria is now short, brutish and cruel!

I do not know if Pastor David Ibieyomie, who tried to use Somalia to shame Daddy Freeze by calling him “that half-caste who is born by a Somalian”, has seen the latest Global Terror Index. Somalia is now ranked better than Nigeria. Sadly, it is calling a Somalian a Nigerian that is now the insult, not vice versa! In fact, it does not end there because just last week, the Chandler Good Government Index listed Nigeria as the third-worst governed nation on Earth (which is such an irony because, under Jonathan, we were the third-fastest growing economy in the world). We should stop saying Nigeria may soon become like Somalia. Somalia is better governed than Nigeria!

(As an aside, I don’t even understand Ibiyeomie’s insult till today. Somalians are some of the most beautiful people on Earth. The supermodel, Iman, is Somalian. The gorgeous Canadian supermodel Yasmin Warsame and the Swedish supermodel, Hawa Ahmed, are Somalian. I know many Nigerian men who will gladly trade their Nigerian wives for Somali ones in a heartbeat. As far as I am concerned, Ibiyeomie complimented Daddy Freeze).

A government that attacks Bishop Kukah for telling the truth but protects Sheikh Gumi for telling lies. A regime that calls for respect for Miyetti Allah, yet disrespects the victims of members of Miyetti Allah. A junta that preaches one Nigeria, but practices nepotistic regionalism in its appointment. A President that advocates made-in-Nigeria rice but medicates with made-in-England healthcare. A ruler who rehabilitates Boko Haram who kill, but devastates IPOB members who do not spill blood. A man who believes women belong to the ‘oza room’, but a demon belongs in his government. Finally, a government that blames a 1975 coup for its 2021 failure!

And after all these, Buhari wonders why Nigeria is falling apart on his watch?
It seems that Buhari is a terrible student of history, and he has surrounded himself with people, who like him, have very low hindsight.

Take last week’s request by Buhari to the US Secretary of State, Antony Blinken, to relocate the US Africa Command from Germany to Africa, and presumably Nigeria.
This was something that the late President Umaru Musa Yar’adua rejected when it was first floated to him in November of 2007. Yar’adua flatly and publicly rejected the overtures to host AFRICOM on Nigeria’s soil.

Fourteen years later, a supposed former military general is begging for it.

And Samuel Doe went in a bad way. A very bad way. We just pray that such history will not repeat itself. No one benefits from it. God forbid. God forbid!
Nigeria better thinks twice about what she is doing. Inviting foreign ministry powers into Nigeria is not a solution, and it will lead to recolonisation.

The issues leading up to our abysmal failure to provide security for our people are not just military in nature. They are leadership problems and they have a cultural aspect.
The cultural aspect has to do with the brand of Islam practised in Northern Nigeria. It is very cumbersome because, although it has serious challenges, you cannot criticise it. After all, if you criticise it, you are labelled a bigot. If you try to correct the challenges you see in the North, you are labelled an enemy of the North.

And so, nobody wants to bell the cat. Their population keeps exploding. Schools are not being built, because the elites send their children abroad. The economy can no longer support the population. The challenges envisaged by Reverend Malthus, when a population grows faster than the economy, is being demonstrated in Nigeria.

Yet, Northern leaders want to continue their way of life. People like Pantami are there to accuse Southerners who speak up about the ticking time bomb as enemies of the North. Kano and other states will continue to fund mass marriages instead of mass education.

Look, the US Army on Nigerian soil can only address the symptom. The causes of the challenges are deep. And if they are not addressed, things will only get worse. Much worse. Much worse indeed.
That is what the British Minister for Africa, James Duddridge, was trying to tell us, albeit in a very diplomatic manner, when he spoke in Abuja on Wednesday, April, 28, 2021.

Said he:
“The situation is massively complex, and no partnership is going to resolve the multiplicity of problems whether it is Boko Haram or a number of other issues.”

How right he was! 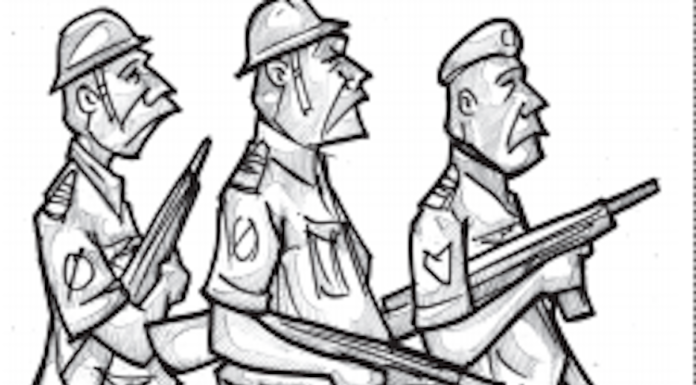 THE MILITARY AND INTERNAL SECURITY