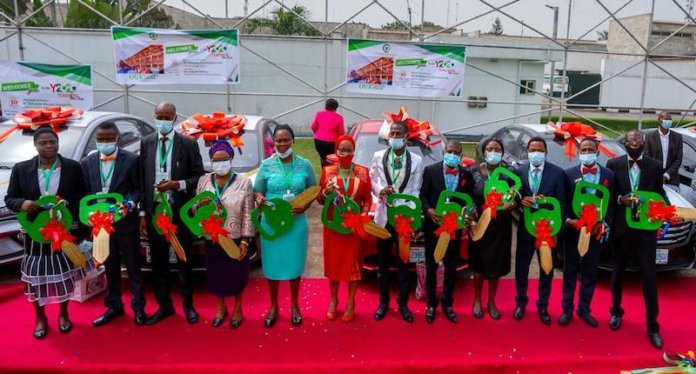 With their outstanding ideas, creative solutions and commitment to enhance learning outcomes among pupils and students of public schools, the Lagos State government, recently, rewarded a total of 13 teachers with brand new cars at the 2020 Teachers Merit Award, aimed at ensuring that they contribute to the development of education in the state.

Excitement rented the air as they recieved the keys to their cars, an iPad and plaques for their efforts.
The honourees were part of the 23 teachers who made it to the semi-finals, out of a total of 3,700 entries recieved by the nomination committee. Others received a chest freezer, an ipad and plaque as consolation prizes.

Earlier in his remarks, the State Governor, Mr. Babajide Sanwo-Olu expressed excitement about the honour for the teachers, saying that the teaching profession is not a thankless job in the state.

” It is a proof that the state appreciates their contributions which is why we are committed to rewarding selfless teachers who are inculcating in children the value, training and equipping them with knowledge.”
He opined that if teachers have such exceptional qualities, pupils will not only excel in academics but will also exhibit innate sterling abilities in cognitive, psychomotor, affective and co-curricular areas of learning.

Sanwo-Olu urged them to continue to uphold the ethics of the teaching profession and display an uncommon sense of responsibility and greater commitment to duty.

The governor affirmed that the group of awardees will serve as Lagos State ambassadors of excellence in education for the next one year, while advising them not to see the initiative as a contest, but a way to motivate them to continue to put in their best.

In her remarks, the State Commissioner of Education, Mrs. Folashade Adefisayo commended the governor for elevating the teaching profession to an enviable height, through improvement of their welfare.

The Chairman Nomination Committee, Mrs. Lai Koiki recalled how it was instituted in March last year, by the Governor, Mr. Babajide Sanwo-Olu with support from the commissioner of education, adding that the committee is impressed by the quality of entries recieved from staff in the public sector.

Speaking to journalists, she expressed excitement about the programme, noting that there are quality teachers in the sector and the system needs to continue to encourage, motivate and provide the resources for them to enhance their profession.

The criteria that stood out the teachers at the end of the day, she noted, was their passion, adding that they were genuinely interested in their students.

“Can you imagine how the teachers were following their students through their secondary school to the university and workplace! Its incredible. These were not things that we were told, they showed us evidence.”
Asked how can it be replicated to ensure more teachers participate, Koiki who is also the Executive Director of Greensprings School said the teachers need to form more learning communities, in other for them to empower others within the community.

A member of the nomination committee and Director, Edumark, Mrs. Yinka Ogunde opined that with the potentials within the public sector ,the private sector needs to look for ways to work on the teacher’s mindset so that they can be more global in outlook and encourage them to develop thirst for learning.

” The teachers should not just see the merit award as a routine exercise. We saw the vibrancy that the private sector brings into the public sector when we took the teachers to Radisson Blu, to expand their thoughts. That for us, is exciting. We have experienced what the public school teachers can offer, but there is a need for them to know that they are there to transform the lives of children in poor communities.”

A teacher in Akinlade Primary School , Eti-Osa , Mrs. Abosede Padonu-Daniel expressed excitement about the car gift saying that the profession brought out the best in her despite the fact that she was posted to an educationally disadvantaged community to teach.

“I was privileged to grow as I meet every child. At times, they will take me to educationally disadvantaged rural community in Okunmopo in Eti-Osa local government. I am very optimistic about life and I also maintain positivity in whatever am doing.”

The graduate of French and Social Studies, Adeniran Ogunsanya College of Education, Lagos and Ekiti State University (EKSU), Ekiti State, thanked the governor for the opportunity saying that though she had an accident in January which almost claimed her two legs, the car would not only enhance her mobility, but would also spur teachers to work harder.

“To God be the glory that while am hidden in the bush, God located me. It’s my first car . In January, I had an accident that almost claimed my two legs, but I am happy that I can stand on my legs celebrating. I was inspired by my primary school teacher, the late Mr. Badejo, who took his time to pay attention to every detail and I took that baton from him right from primary school. Am happy and proud to be a teacher, ” Padonu-Daniel said.

Responding on behalf of the awardees, the Principal of Gbagada Junior Comprehensive School, Mrs. Ovinuyon Buhari said the gesture by the governor is a dream come true.
“We have been hearing about it and finally it is real.”

She thanked the state government for its commitment towards supporting teachers and ensuring their welfare is given utmost priority.
“The screening process was indeed intense, but fulfilling as we were able to learn better ways of delivering service to our respective schools.”