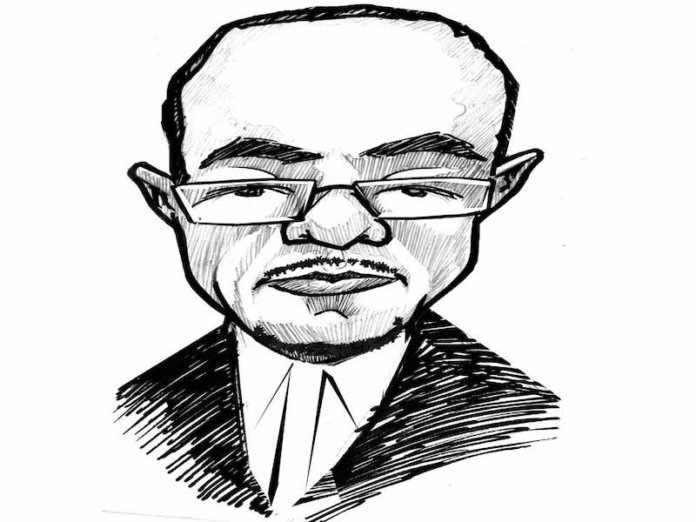 The conduct of Justice Umar is unacceptable

Chairman of the Code of Conduct Tribunal (CCT), Danladi Umar was last week caught on camera fighting with a security man in the Wuse district of Abuja. Although he has tried to rationalise an irresponsible behaviour that calls to question his temperament, any discerning person watching the video would see that Umar’s response was the typical ‘Does this man know who I am?’

Narrating his ordeal, Clement Sargwak, 22, said trouble started after he informed Umar that his vehicle was not well parked, as it would obstruct other visitors coming to the plaza. “After I informed him about his wrong parking, he came out and slapped me,” said Sargwak who added that an enraged Umar “went to his car to pick up an iron rod in an attempt to hit me on the head. A tenant at the plaza quickly held his hand and pleaded with him not to hit me with the metal.”

Since video evidence bears out the claim by the assaulted security man, there is no known justification in Nigerian law for the despicable acts of brigandage displayed by Umar who was lucky to have escaped the scene without being lynched. As a member of the bar and bench, Umar must understand that there are clear and definite constitutional provisions for any aggrieved person to seek redress in a court of law. A situation in which a man who superintends a critical government agency dealing with code of conduct was publicly engaged in violent acts smacks of arrant rascality.

In an embarrassing statement strewn with grammatical errors, the CCT Head of Public Relations, Ibraheem Al-Hassan put the blame for what happened on ‘Biafran Boys’ without explaining the conduct of Umar who could be seen throwing punches at a man later identified as the security man. That such a statement would come as an official response depicts the level to which Nigeria has degenerated. But the person to hold accountable for what happened is Umar.

The Nigerian Bar Association (NBA) has condemned what it described as a “display of naked power by a public officer especially one who, by virtue of his high office, is expected to exhibit a high standard of conduct,” adding that “the situation is all the more critical when it involves the head of an agency of government set up to ensure compliance, by public officers, with the code of conduct.” Furthermore, according to the NBA, Umar is expected, “by the extant rules that regulate the conduct of legal practitioners in Nigeria, to maintain a high standard of professional conduct, and not to engage in any conduct which is unbecoming of a member of the legal profession. Prima facie evidence available at the moment raise questions regarding whether such standards have been met.”

There are precedents for dealing with Umar’s rascality. On 15th March, 2010 the National Judicial Council (NJC) suspended Justice Idris Habib Shall of the Bauchi State High Court for fighting in public. The Judge had physically assaulted a petitioner, Kassim Danlami of the Bauchi State Ministry of Work and Transport. So, the issue in this case is not even whether Umar was the aggressor; the issue is that he fought in public. With the compelling video evidence, he cannot deny that.

By their special vocation as an unbiased empire in the dispensation of justice, judges ought to be the most disciplined officers. Aside the issue of assault, Umar is using the cyberspace to promote hate speech by referring to his brawl opponents as ‘Biafra Boys’ in contravention of the relevant law. A man who could exhibit such gross misconduct in public cannot continue to chair the Code of Conduct Tribunal.