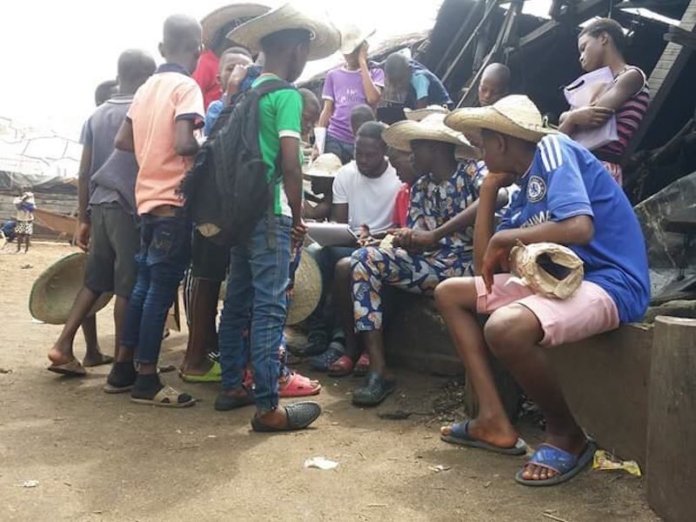 Since his first visit to the Lagos waterfront slum community Makoko in 2014, Damilola Opedun has remained resolute in his commitment to imparting art skills to its children. Okechukwu Uwaezuoke reports

ART-ICLES
Jacob might just as well be any of the many nondescript teenage boys flitting about the Makoko community. Could that be why Damilola Opedun offers no further – not even sketchy – details about the 15-year-old? Makoko, where Jacob lives is, by the way, is an informal Lagos mainland littoral community. Some apparently informed sources estimate that a third of this community is built on stilts on the fringes of the Lagos Lagoon, across which the Third Mainland Bridge spans. Most of its residents, who are mostly fishermen, are widely believed to have migrated from Badagry and Benin Republic.

Back to Jacob. What matters here is that Opedun got talking to the youth one day. The fact that Jacob’s poor class attendance was taking its toll on his grades has not escaped his attention. Nor has the fact that the boy hadn’t been seen that often lately in his Saturday art classes…
After the boy’s father gave up the ghost last year, his mother has been piling on the pressure on him to become the family’s new breadwinner. And one way she thought he could do this was to offer water taxi services within the Makoko community. Meanwhile, Jacob has since his father’s passage moved in with his uncle.

Of course, making much money in a poor community like Makoko was out of the question. Hence, there were days Jacob couldn’t even make up to N2000, which would be just about $ 4.89. This, he told Opedun, would make his mother so angry that she would accuse him of not being serious enough with the canoe taxi business. Sometimes, she would beat him when they were left with very little profit after the deductions of the cost of renting the canoe had been made. And the sad thing, for Opedun, is that Jacob is a very talented and promising art student in his Saturday classes, who is committed to becoming a successful professional visual artist in the future.

Not much better is the case of another youth, called Lazarus, who is at the top of Opedun’s Saturday art class. Previously attending a French-speaking school back in his country of origin, the Benin Republic, he has since his family’s relocation to Makoko been forced to be out of school. His father, a fisherman, and his mother, a fishmonger, can no longer afford his education since Lazarus is just one – the fourth child actually – among their 10 children. On the brighter side, Lazarus offers his skills and services to training younger and new students joining the art classes.

Opedun first visited the famous slum community sometime in September 2014. He had accompanied an artist friend of his, Adebanjo Mesagan, to a part of the community called Oko Agbon to take photographs as reference materials for painting. After he graduated from the Auchi Polytechnic in 2010, Opedun was posted to Lagos State for the mandatory one-year National Youth Service Corps programme. He had, at the end of the service year, opted to stay back in Lagos, where he at first tried to eke out a living by hawking his paintings to art galleries. This was before he crossed the path of an old friend Tenne Fatona. Fatona, who owned a hotel in the middle-class residential mainland neighbourhood Gbagada, literally took him off the streets by offering him a job as a manager of this hotel. But this did not stop Opedun from continuing to work on his paintings.
Shocked by the horrific living conditions he found among the Makoko slum-dwellers, Opedun resolved, as they approached the community chieftain’s house for permission to take photographs, to make an additional request. And that was to be permitted to train the children in art skills.

The permission to impart art skills to the community’s children was eventually granted after the elders had held several consultations among themselves and done their background checks on the artist. Thus, with the approval granted, his first art class in Makoko held on Monday, January 26, 2015. The art classes, which at first held thrice weekly, soon tapered off to holding just once a week (on Saturdays) after he got married on Saturday, April 25 that same year.

During the first two years, Opedun saw no need to publicise his activities in the informal settlement. He at first cringed at the Pharisaic thought of announcing his good deeds from the rooftops. But then, on second thoughts, he reasoned that publicity would help the cause of these underprivileged children. Hence, by January 2017, he had started posting his activities on Facebook, with the hope that well-meaning people out there would be inspired enough to wish to help the children.

Yet, there were moments he was assailed with despair and self-doubt, even toyed with the idea of giving up on the project. Having only two or three students sometimes showing up for the art lessons, because the others had gone to work to support their families, didn’t help matters. “I have also discovered from my interactions with the kids that most of the parents do not wish their children to pursue any other profession outside the common profession of fishing or whatever will keep them within the community for life.”

Then, another encounter with a preacher almost convinced him that he was wasting his time with the children. This preacher, whose denomination failed to thrive in the community, condescendingly alluded to the fact that some soils were destined not to produce good fruits no matter how much work one puts into them. Besides, he recalls being so broke that he couldn’t afford the transportation cost to the community. “But because I’m dedicated to the vision, I would somehow manage to go. The Almighty has always met my needs at the end of the day.”

Of course, it wasn’t easy looking on, as his colleagues sold works in exhibitions and went for art residencies. And here he was going to Oko-Agbon, Makoko every week to teach and inspire underprivileged children!

“Oftentimes, I have been asked what my inspiration for visiting this community was without any sponsor,” he muses. “To think that I’m a young man still trying to find his feet in Lagos. Well, my answer is that there is an indescribable and profound love that I have for the kids. I’m gratified to see the joy in their faces every week they see me. I believe God is behind my vision and the inspiration that has fuelled my passion these years.”

Now, the Ondo State-born artist seemed to have successfully put those periods of self-doubt behind him. “Now, I’m more passionate about this work because the effect is so visible on the children that attend my weekly class,” he enthuses. “Their behaviour and perceptions are positively dramatically different from other kids around them, they are really becoming beacons of light for their peers.”
He remains grateful to the Almighty that he has also been able to provide 100-page sketch pads, pencils and erasers for each participant in the art classes and that he had remained resolute since the day he vowed to dedicate his life in the service of building good moral values people that cross his path.

Meanwhile, back in 2017, one Idowu Opaleye and his friends Gbenga Ijamakinwa and Banji Akande sponsored the registration and the creation of the website of his NGO, The Seed of The True Vine (TSTTV) foundation. Their efforts were later complemented by those of the architect Samuel Okai, who designed the proposed Makoko art studio, the chartered accountant Conerlius Okai, who is in charge of the TSTTV accounts, Damola Ogunbambo who is in charge of the website and social media accounts, the University of Benin undergraduate Emem Ibanga, who creates content for the social media accounts and the artist Azeez Salami, who doubles as a facilitator at the Makoko art classes and Ezekiel Onwuka, who handles the logistics.

The recently-acquired studio space housing the TSTTV Studio Two, which is along Ajayi Aina Street in Gbagada, was inaugurated on Saturday, January 16 this year. “We hope in this new year to build a wooden structure in Makoko for the children and that will be the Studio One.”
Perhaps, a precursor to this TSTTV studio would be a studio space he used to have in a small compound at 10, Olufeyisan Street in the Lagos Lagoon-front neighbourhood Oworonsoki in 2016. This was where he worked with a group of six students from the Yaba College of Technology’s art department, who solicited for an internship programme in his studio.