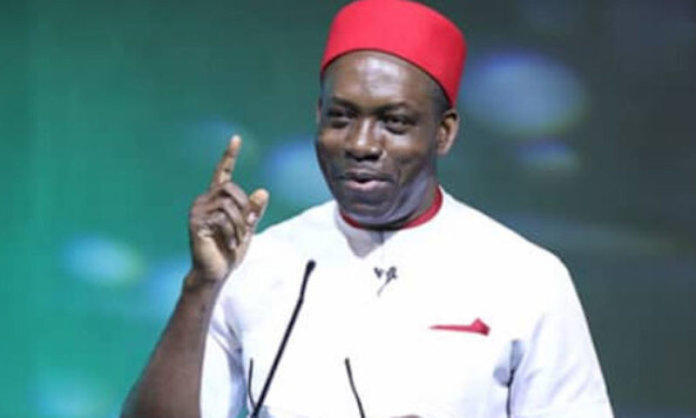 For over two years, some political interest groups in Anambra State had worked to convince a former Central Bank Governor, Prof Chukwuma Soludo to vie for the governorship position of the state. The groups consisting of youths, men and women’s associations, had all along been allegedly self-funded and had on many occasions, paid the Professor of Econometrics visits at his home town, Isuofia, through emissaries and in persons too, all in a bid to get him to accept the charge of running for the Anambra governorship.

The Independednt National Electoral Commission had earlier announced that the Anambra governorship election would hold on November 6th 2021, and this has further heat up the state’s polity, with aspirants from several political parties announcing their intention to run for the position, which would be vacant on 17th March, 2022, when the incumbent governor, Chief Willie Obiano would leave office after his two terms of eight years.

Soludo was amongst those who declared their intentions to run for the position, presumably heeding the call of the over 24 groups that had been prodding him to do so.
During a visit to the secretariat of the All Progressives Grand Alliance to declare his intention, he said he decided to join the race to win the election for the party, stating that the election was very important to APGA, as the party might go extinct if it failed to make it back to the Government House, as Anambra was the only state in the country controlled by the party.

Hon Chinedu Obidigwe, who represents Anambra East/Anambra West and spoke on behalf of other lawmakers said, “In 2013, Soludo was disqualified by the party as an aspirant of APGA, and he took it in good faith. He was not among the aggrieved aspirants, who decided to play a spoiler game for the party. We have been begging Soludo to run, and today he has accepted to run. All members of the National Assembly caucus from APGA have resolved that we will support him. Just one or two people person are disagreeing with this, but you know that majority carries the vote.”
The declaration and the show of popularity were believed to have caused a massive opposition against soludo’s bid by members of the party, who support other aspirants. On a daily basis, people who have been described as paid writers flood the social media with messages against the former CBN governor, describing him as being too elitist, and warning might not support his aspiration, as he was more favourably disposed to working with only professors, and might likely abandon his supporters if he won.

Many people have also described the attack on soludo as being sponsored by aspirants from other political parties, who feared that if soludo clinched the ticket of the party, it might be difficult forAPGA to lose the election, just as it would be easier for other parties to win if APGA fielded a less popular candidate.

Thus, on Wednesday night, yet to be identified gunmen invaded the venue of an interactive session between Soludo and youths of his community in Isuofia, Aguata Local Government Area of the state and disrupted the session with sporadic gunshots, which felled three policemen – aides of the aspirant. The gunmen took along with them a commissioner in Anambra State, who heads the ministry of Public Utilities, Emeka Ezenwanne, said to be an inlaw to Soludo.

Though five persons had been arrested so far in connection to the shooting, police authorities are yet to disclose what the suspects gave as the reason for the attack. Spokesperson for Anambra State police command, DSP Toochukwu Ikenga who spoke to THISDAY said the Commissioner of Police, Anambra State Command, CP Monday Bala Kuryas visited Soludo over the attack, and also visted the scene of the attack.

A police source added that: “One of the attackers forgot his phone at the scene of the attack, and we found it when the CP visited the place. We tracked down the owner and arrested him, and he is helping us with investigation.”
On Thursday, the command announced that four additional suspects were arrested, and they owned up to being part of the attackers. Ikenga, in a press release said, “Police Operatives attached to Anambra State Command today 1st April, 2021 arrested four (4) additional suspects in connection to the recent attack and gruesome murder of three (3)Policemen at Isuofia Civic Center in Aguata LGA of Anambra State.

Since the attack, however, there have been permutations on the reason for it, with two of the permutations standing out as plausible. While some people believed that the attack might have been politically motivated, since Soludo was already enjoying popularity in the governorship race, others thought it might be the same trajectory of series of attacks on security agents, which began in March in Anambra and some other south eastern states.

Narrating his experience, Soludo said, “We were having an interactive session and we finished the mass about 4pm and the scheduled interactive meeting with the Isuofia youths. By the way, Isuofia happened to be my hometown. I’m a village boy and this is where I feel safest anywhere in the world. I walk the street, I jog in my community, I take long walk, I am everywhere as a village boy.
“With this interactive session, there were over a thousand youths seated and I was just making preliminary remarks to open up the interactive session with other dignitaries from the communities, commissioners and members of the house of assembly. And just as I was about to wrap up and I said, ‘Finally!’ for them to open up for comments and answers, gunshots! At first, I thought may be the policemen were shooting in the air with the kind of exuberance in the hall until I began to hear people screaming and we all scampered to safety.

“It took more than 10, 15 minutes of continuous gun battle. By the time we all came back, we saw three bodies there lying in the pool of their blood – they were the three policemen. May God grant their souls eternal rest. We will continue to pray and support their families. I was totally unhurt, not in anyway hurt,” Soludo said.

On whether it was politicall motivated, he said: “I am friend with everybody contesting the office. I don’t think the office is worth the blood of even a chicken let alone a human being. I will be shocked that it was politically motivated and that it was aimed directly at me.”
Though the ball is now in the court of the security agencies to disclose what the attackers said was the reason for their action, it might have also prepared Soludo for what lies ahead. Soludo is not new to such attacks. During a recent meeting with journalists, he narrated how he got 19 threat messages after the CBN under him announced the intention to recapitalize the financial base of banks in the country. He stated that attempts were made to kidnap his children from a school in Offa, Kwara State.

His words: “You know it is not easy to change an existing order. There was nothing I did not see. I received 19 written threats to my life. Even there were attempts to kidnap my children at Offa in Kwara State. So, it was a very brutal revolution. I had to evacuate my family to be able to do the banking consolidation, because when you want to uproot a system, it is usually a deadly routine.”
Today, Soludo has returned with plans to ensure that the 50 years development plan of the Anambra State government, which he graciously chaired it’s committee, is implemented. This (governorship) for soludo may be another “uprooting of existing order”, which he has acknowledged is a dangerous venture. When THISDAY visited him recently at his Isuofia home, Soludo refused to speculate on the possible reason for the attack, saying he would rather leave that to the security agencies to unravel.