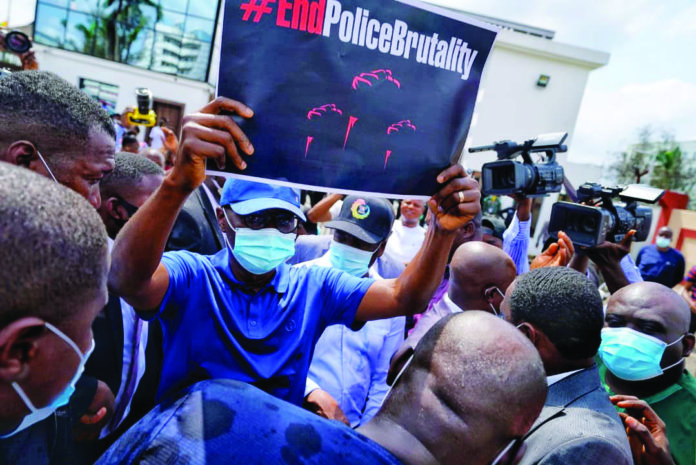 A recent report by the US government faulting claims that the Nigerian Army killed protesters at Lekki Tollgate during the #EndSARS protests, is not a recipe for closure but could facilitate one, writes Louis Achi

In human affairs, closure means finality – a letting go of what once was. Finding closure implies a complete acceptance of what has happened and transitioning to something new. In other words, closure describes the ability to go beyond imposed limitations in order to find different possibilities.
Often, people grieve before they could achieve a sense of closure. But ultimately, justice is the best facilitator of closure. The EndSARS protests, last year, captured a sad human chapter in the troubling evolution of the Nigerian state. It now requires closure.

The #EndSARS protests, which triggered unprecedented agitations last year across Nigeria, by young citizens against the brazen, often bloody impunity, of notorious police unit, SARS, ultimately led to a ‘confrontation’ with the military at Lekki Tollgate, Lagos, which claimed some lives – still being disputed.

Related to the EndSARS protests, the U.S. Department of States in its 45th annual human rights report released last Tuesday said it could not confirm the accurate figure of casualties from last October’s Lekki tollgate shooting in Lagos during a protest against police brutality.

Part of the report read: “On October 20, members of the security forces enforced curfew by firing shots into the air, to disperse protesters, who had gathered at the Lekki Toll Gate in Lagos, to protest abusive practices by the Nigerian Police Force’s Special Anti-Robbery Squad. Accurate information on fatalities resulting from the shooting was not available at year’s end.”
It further noted that besides “Amnesty International, which reported 10 persons died during the event, no other organization was able to verify the claim….

“One body from the toll gate showed signs of blunt force trauma. A second body from another location in Lagos State had bullet wounds. The government acknowledged that soldiers armed with live ammunition were present at the Lekki Toll Gate. At the year’s end, the Lagos State Judicial Panel of Inquiry and Restitution continued to hear testimony and investigate the shooting at Lekki Toll Gate.”

The US report also added that, “demonstrations were largely peaceful, but some protests turned violent after criminal elements infiltrated the protests and security forces fired at protesters at the Lekki Tollgate on October 20.”
Significantly, the US report further challenged the claims by several international media and organizations like Amnesty International and Cable News Network (CNN) that many had died during the Lekki tollgate incident.

The U.S. report, now in its 45th edition, examines the human rights standing of 198 countries with a focus on seven sections, including press freedom, corruption and transparency.
U.S. Secretary of State, Antony Blinken, announced the publication of the report last Tuesday, saying his country acknowledges the “work ahead and expects all nations to respect human rights and fundamental freedoms.”

But there have been pushbacks against the US report. Activist and human rights lawyer, Femi Falana has condemned the report, calling it prejudicial, contradictory, and misleading. According to him, the report “attempted to cover up the brutal killings at Lekki and other parts of Lagos from October 20-27, 2020. It is a very contradictory report.

He then queried: “Do soldiers shoot into the air to enforce curfew in the United States?” Falana therefore advised the Nigerian media to stop treating Nigerians like colonial subjects by celebrating a foreign report that is subversive of the rule of law in Nigeria. “How can the US government be allowed to treat the proceedings before a properly constituted Judicial Panel of Inquiry so contemptuously? The report is prejudicial in every material particular”.

On its part, Amnesty International last Thursday said the US could have taken more time to evaluate all available evidence before publishing its reports on the October 2020 Lekki toll gate shooting. AI’s Nigeria boss Osai Ojigho said the testimonies of witnesses at the Lekki Toll Gate affirmed that soldiers fired live rounds at demonstrators as against claims of firing blank bullets in the air.
“Amnesty International stands by its initial findings that in October we released based on the information that we’re able to independently verify as at that time and we’ve continued to encourage the state government and the federal government to do justice by the people,” Ojigho said.

More…“Amnesty International had asked for independent and transparent investigations into what really happened at the Lekki Toll Gate and we still haven’t seen that and that is what is really worrisome especially, because a lot of people will not be able to move on until justice is served.”
Going forward, democratic countries must address how best they will deal with the human rights crimes committed under its watch. Increasingly, claims are made that truth commissions have beneficial psychological consequences; that they facilitate ‘catharsis’ to allow the nation to ‘work through’ a violent past.

Calls or the necessity for closure may demand too much psychologically from survivors and victims if they are not grounded on justice. Even creating symbolic closures demand symbolic justice. The South African Truth and Reconciliation Commission has become the paradigmatic international model of how to ‘work through’ a violent past and in so doing, to ‘heal the nation’.
The establishment of state-based judicial panels of inquiry to also ensure justice for EndSARS victims and families affected does not equate a truth and reconciliation commission, because the contexts are different. To go forward and heal, Nigerians need closure on the hurtful and sad EndSARS event. But it should be grounded on justice.
Pix: Governor Babajide Sanwo-Olu at the #EndSARS protest in Lekki tollgate.jpg