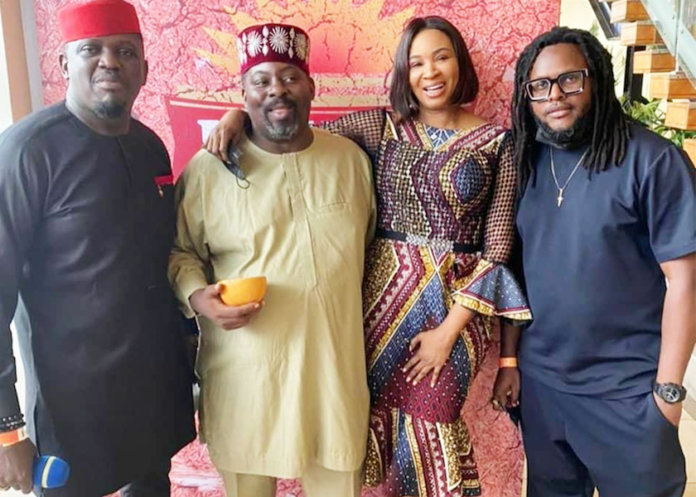 Ferdinand Ekechukwu writes on “The Hero’s Walk”, a documentary that showcases and propagates the essence of ‘Imu-Afia’, the Igbo apprenticeship system

As Ace rapper, IllBliss (Oga Boss) welcomes guests to the recent premiere of The Hero’s Walk, a documentary on the “The Igbo Apprenticeship System”, at the Imax Cinemas, Lagos, the atmosphere beseeched with conviviality, as tradition reminiscent of the Igbo people literally emerged, setting forth a group of masquerades, dancers and traditionally dressed ushers. Thrills and frills of this spectacle permeated and connect top players from the media and entertainment sectors like Obi Asika, Chioma Ude, Chris Obosi, Nkem Owoh and a host of other industry personalities and A-list celebrities who had come to support the brand.

But then IllBliss was not alone. He co-anchored with ace comedian and radio presenter, Steve Onu, popularly known as ‘Yaw’. Together, they enlivened the moment preceding the thoughtful, thought provoking well put together documentary which spotlights the entrepreneurial spirit of the South-East. “This is our story, how so many empires and legacies were built. The business!” the award-winning rapper had earlier tweeted. Naturally set in the eastern part of the country, the 35 minutes documentary which opened, showing the rapper, IllBliss and veteran Nollywood actor, Nkem ‘Osuofia’ Owoh as nephew and uncle respectively; both Hero Lager’s brand ambassadors.

IllBliss in the documentary sought from Osuofia the importance of the Igbo apprenticeship practice commonly known among the people of the region as ‘Imu-Afia’. Partly conversing in Ibo dialect and English, IllBliss, whose real name is Tobechukwu Melvin Ejiofor began: “Uncle, greetings,” he said, seated expectantly. “Why is the ‘Imu-Afia’ so important to our people?” With this one single definitive enquiry follows an amazing exchange between the nephew and the uncle characters exposed on the apprenticeship model which gained prominence at the end of the Nigerian civil war in 1970.

The Hero’s Walk documentary literally chronicles the journey of the average Ibo man into apprenticeship or into entrepreneurial ship. Drawn from the documentary, the Igbo apprenticeship system holds the secret of Igbo’s success in trade. Many young men from South-Eastern Nigeria enter the informal Igbo apprenticeship system, also called Imu-Ahia, annually. This training system has offered many a path out of poverty and created a large number of millionaires and billionaires. The narrative pattern taken by the documentary tells that to the Igbos, the world is a market place. Hence, the widely held notion that Igbo people are very entrepreneurial and being very business minded.

And so important is this apprenticeship system entrenched in the Igbo culture and uniqueness that makes it symbolic. That the Ibo culture is so rooted in the spirit of trade that the days of the week are even named after market spaces in Igbo holds in this documentary. So the brand Hero decided it was time to start telling their stories, to start documenting the things, the elements and aspects that make the Ibos very different and very unique, hence the birth of the documentary.

There’s something about the documentary that evokes nostalgia among all; you will remember that cousin, nephew, neighbor, someone you recall who has left the village as a starry eye teenager or young adult to take a stand in an intimidating city – a city such as Lagos – and has returned many years down the line as a thriving entrepreneur. You will even come face to face with your own story; how you have navigated the twist and turns of your peculiar entrepreneurial journey and how the lessons you learnt have contributed to the person you are today.

Further in the documentary directed by Tolu Tana features top successful Igbo entrepreneurs like Chief Innoson Chukwuma of Innoson Group, among others as academics and traditional leader Igwe Nnaemeka Achebe (Obi of Onitsha) as they discuss how the apprenticeship practice has contributed to the building of business empires. So dear is the core of the apprenticeship system that the incredible work of art titled The Hero’s Walk prior to the Lagos premiere toured major eastern parts of the country, showcasing and celebrating the essence of the apprenticeship system which is now a source of pride to the Igbo people.

“It is very dear to the heart of those from the region that most recently, the documentary toured across five cities, including Nnewi, Aba, Onitsha, PH and of course in Lagos. In all of these cities the documentary premiered attracted tremendous commendation from people in the market – the consumers – people that really need this story – and had massive turnout from traders, artisans, market leaders, professionals… different people came out to view the documentary,” Marketing Manager, Hero, Margaret Igabali said.