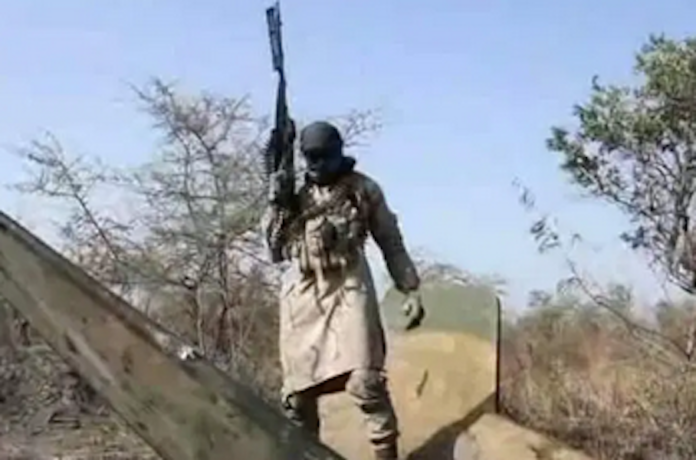 There was palpable anxiety among Nigerians yesterday following unsubstantiated video evidence by Boko Haram showing how it shot down the Nigerian Air Force fighter jet that crashed in Borno State on Wednesday.

The anxiety was heightened by the failure of the military authorities to locate the so-called true crash site, 48 hours after the incident.

The Alpha light attack jet was on a mission to support troops fighting the terrorists in North-eastern Borno State when it lost radar contact.

But the Nigerian Air Force said the Boko Haram’s claim was absurd, insisting the details of the crash were yet to be fully verified.

“If this video is true, that Boko Haram now has the capacity to bring down a fighter jet, then, this war has taken a dangerous turn. It says a lot about the range of equipment now in their possession. We are in serious trouble, so this government needs to sit up,” remarked a retired army officer who pleaded for anonymity.

The video released yesterday by the terrorists showed how the Nigerian Air Force Alpha Jet aircraft (NAF475) was allegedly fired at mid-air and went down in flames.

The audiovisual, which could not be verified, was released on a Boko Haram social media channel, showing a militant standing on what the group claims are the wreckage of the jet. It shows the Nigerian flag and number NAF 475 on its fuselage.

“Nigeria air force jet fighter… was sent to Sambisa to fight the Mujahideen,” a terrorist said in the video.

The trending video depicted members of the group carrying the corpse of what they claim to be one of the crew members.

But the Spokesman of the Nigerian Air Force, Air Commodore Edward Gabkwet, said the claim by the terror group was absurd.

Gabkwet said: “We never claimed that the aircraft did not crash. We were very clear. We suspected it crashed. For a terrorist organisation to claim that it shot the aircraft down is what we find very absurd.

“We have seen some videos but there is nothing that has proven that the aircraft in those clips belongs to us, or have you seen a Nigerian Air Force aircraft number? Or the body of Air Force pilot? Or have you seen any Air Force uniform? Until we get all these details strengthen out, we are not going to go into speculation.

“That video could have been shot somewhere. I have seen four videos so far, one of them has lush vegetation in the background, and I wonder where they have such vegetation in the North-east. Unless they did something and they are releasing the clips bit by bit, we are waiting.

“Except we have evidence, because like I said, these persons have families and you cannot just go to their wives, parents or wards. You must bring concrete evidence. There must be something to show.

“Although the video is still being thoroughly analysed, it is evident that most parts of the video were deliberately doctored to give the false impression that the aircraft was shot down. For instance, the video clip failed to show the correlation between the sporadic shooting, which even from casual observation was obviously aimed at ground targets, and the sudden mid-air aircraft explosion.

“In addition, it is almost impossible for an aircraft to have exploded mid-air, in the manner depicted in the video, and still have a good part of its fuselage, including its tail, intact. Indeed, an explosive impact of that nature would have scattered the debris of the aircraft across several miles.

“It is obvious that the Boko Haram sect, in its characteristic manner of employing false propaganda, is seeking to claim credit for what was obviously an air accident that could have been caused by several other reasons.”

Gabkwet advised that the video be ignored until all investigations as to how the aircraft crashed are completed.

A statement issued by Gabkwet, cited intelligence report that indicated that the Alpha Jet aircraft (NAF475) that went off the radar with two crew members on board on March 31, 2021, might have crashed.

It said the cause of the crash and whereabouts of the pilots remained unknown.
The NAF said extensive search and rescue efforts involving NAF surveillance aircraft, Special Forces and Nigerian Army troops were in progress.

The statement affirmed that the Air Force was not ruling out any eventuality but expressed hope that the crew would be found.

The Chief of Air Staff, Air Marshal Oladayo Amao arrived Maiduguri Thursday, as soon as the announcement was made about the disappearance of the aircraft. After he was briefed, he took charge of the search and rescue effort.