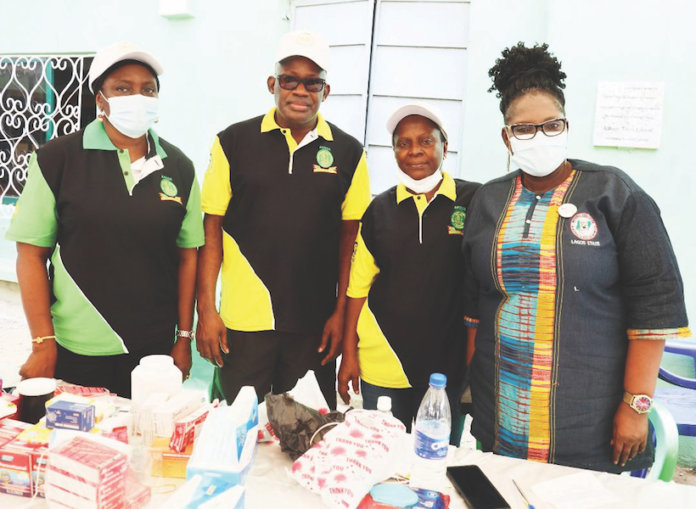 The pregnant clouds and threats of heavy downpour would not stop the old students from participating in AHOSA’s 3.5km health walk, as they trooped out as early as 7am of Saturday, March 27, 2021. They marched through major streets around Surulere, in high morale, accompanied by melodious sounds from a live band, and amazing mimes to the beats, raising the school’s banner high for all to see that it was in commemoration of the anniversary of the school established in 1961. Everyone was in high spirit.

Prior to the medical mission and health walk, in commemoration of its anniversary, the members led by the 60th anniversary Chairman, Organising Committee and CEO, Ibeji Foundation, Alhaji Rafiu Adisa Ebiti on Friday February 12, 2021 converged on Central Mosque Surulere, Lagos to thank the Almight Allah and on Thursday March 18th, Alhaji Ebiti, AHOSA President, Mr. Rafiu Williams and others embarked on humanitarian gestures by visiting Old People’s home around Lagos where food items and monetary worth thousands of Naira were distributed to the needy.

AHOSA members completed the walk in no time, and headed back to the school premises to receive some health talks on how to care for their eyes, prevent glaucoma, and diabetics. While educating members of the association, a retired Ophthalmic Nurse, Mrs. V.I. Agosu defined glaucoma as a condition where the pressure of fluid within the eye gradually increases to a level not tolerated by the sensitive tissues of the eye,” explains Agosu.

Agosu explains further: “The optic nerve, which is similar to a cable wire carrying visual images to the brain, is the portion of the eye susceptible to damage from glaucoma. Such damage is irreparable and visual loss due to glaucoma is irreversible.

“There is a fluid filled chamber in the front of the eye called the anterior chamber it is filled with aqueous humor, which bathes and nourishes the tissues of the eye. If the drainage of this fluid is restricted for reasons yet unknown, pressure builds up within the eye causing glaucoma. Glaucoma contributes three per cent of some of the leading causes of blindness in Nigeria, and it is more predominant in persons over the age of 40. The disease may also occur in people of all ages including new born.”

Speaking on some symptoms of glaucoma, another retired Ophthalmic Nurse, Mrs. O.A Akinbote highlighted “pains around the eyes when coming out of darkness, coloured halo rings seen around light, hazy or blurred vision, severe eye and head pain, nausea or vomiting, sudden sight loss and sight recovery” as some of the early symptoms.

“In most cases of glaucoma, the patient is not aware of the gradual loss of sight until vision is significantly impaired. However, a simple test with a device called ‘tonometer’ can help measure the pressure within the eye.

“This test alone cannot detect all glaucoma; the back of the eye must as well be examined after dilating the pupils. Side visions may also be examined by a computer assisted simple test called perimetry or visual field examination,” she said.

On treatment, Akinbote noted that the loss of vision due to glaucoma was irreversible, “however, appropriate treatment and regular follow up can preserve remaining vision, the earlier the diagnosis, the better the chances of arresting visual impairment.”

Advising members on some do’s and don’ts of glaucoma, both Agosu and Akinbote stressed on the importance of eating appropriate potions of balance diets, limit intakes of caffeine, avoiding sedentary lifestyles, quit smoking and ensure to always sleep for at least six to eight hours at night.

Speaking to THISDAY about the health mission, AHOSA President, Mr. Williams said: “Moments ago, we just returned from the 3.5km health walk, we also just had health talks from medical experts, and medical screening is currently being done on members. We also have table tennis competition among members, which is a physical exercise, and it all fits into the bigger agenda of fitness and healthy living in commemoration of the 60th anniversary of the school.

“Hence, today is about health, healthy living, and fitness. We had one on Wednesday and Thursday, which was mainly for the current students of the school. Next, we would be having a jolly train ride for the picnic that should be happening in a couple of weeks or so. Beyond the activities that we set aside for each day, it is also to provide an opportunity for all to gather, share experience, reminisce and network.”

The president charged the current students of the school to uphold the Ansar-Ud-Deen spirit, known for excellence, good values, distinction, philanthropy, and always giving back to their soon to be alma-mater.

Corroborating Williams, a member of the association who attended the school from 1973 to 1977, Mrs. Kafayat Idowu, also a retired Asst. Director of Nursing Services, described the health experience as interesting and reenergizing.

Idowu said: “As you know, it was initiated to improve the member’s health. Some of us would wake up, eat, go to work, return, eat and sleep routinely, without any attention to exercising our body. This event has forced such people to do little exercise this morning by walking. And the medical screening is for members to establish their health status, because some of them are here, without even knowing that they are hypertensive or diabetic.

“Some are even in the pre-diabetic state, but with this screening, once it can be detected that their sugar level is a bit higher or lower, and then we can advise appropriately.”

Lending her voice, one of the Nurses on duty, also a Member of AHOSA, and the Asst. Director of Nursing Services with the Lagos State Ministry of Health, Mrs. Mary Lateef-Yusuf, revealed that the medical rounds were focused on checking the blood pressure of members, screen members for diabetics, and glaucoma, which are some of the health issues prevalent in Nigeria today.
Lateef-Yusuf adds: “I have seen some cases of hypertension this morning, and some of them were unaware that they were hypertensive, because it is a silent killer. And if you remember correctly, you will know that even the state government is passionate about hypertension and diabetes which are silent killers.

“Majority of the sufferers are not even aware that they are suffering from the disease. We have seen some today and we have advised them to go to the nearest health facility to them, and continue the care that we have started here, and those that the conditions are higher, we have referred them to the nearest secondary facility, so that they can get help there.

“We have a lot of government health centers within the locality where people are living. But it’s like some people are unaware of those facilities or some have this wrong perception that treatment there is expensive. The facilities have drugs revolving funds, and if you go to the nearest government health facility, you will be properly managed there. We have doctors in all the facilities paid by the government to see to people’s health. And that is our major message to members, and Nigerians because the health mission is a way of caring for ourselves.