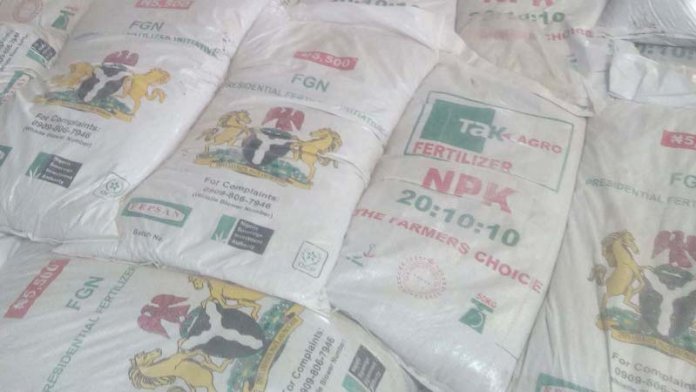 Nigeria is Africa’s largest country with the fastest growing population. Consequently, the nation’s food needs continue to rise. However, the increase in food production has not kept pace with population growth. This scenario is mirrored in the rising food imports and declining levels of national food self-sufficiency.

Clearly, one of the main factors undermining agricultural output is the general sub-optimal yield per hectare due to low fertilizer application among other factors. For decades, this has been the bane of the agricultural sector in Nigeria.
Curiously, the role of fertilizers in crop yields and agricultural productivity are usually underestimated by many. That’s why mineral fertilizers are used to supplement the soil’s nutrient stocks with minerals that can be quickly absorbed and used by crops.

Late distribution of fertilizer to farmers, delivery to unintended beneficiaries, price distortion in markets, crowding out private sector investments and late payment of suppliers added to the mix that made the national agricultural policies of 2006 to 2015 untenable and incapable of improving Nigeria’s fortune in food production.

Encumbered by a debt burden of over N60 billion in subsidies, moribund blending plants and over-reliance on imports, the Buhari administration incepted the Presidential Fertilizer Initiative (PFI) – beginning from the 2nd of December 2016 – kick-started the process that eventually liberated the agricultural sector from the clutches of poorly implemented policies of past administrations.

The Presidential Fertilizer Initiative (PFI) was set up and designed to ‘disrupt’ the status-quo of importing blended fertiliser, by directly negotiating discounted contracts to procure the four constituent raw materials for NPK Fertiliser sourced from Europe – and blending these locally to produce NPK Fertiliser at reduced cost.

In the first stage of the five-stage fertilizer initiative, the President engineered the supply of high-quality raw materials at scale to domestic blenders. Secondly, the current government’s import substitution programme was scaled and gradually, restrictions were placed on importation of finished blends of fertilizer. As the blenders attained financial independence and operational wherewithal, the third stage – a total ban on importation of finished fertilizer products – was then implemented.

In the fourth stage, the President sought the backward integration towards the domestic production of raw materials (Phosphate, Potash etc.) not currently produced locally – while in the fifth and final phase, government will stimulate a gradual move towards open market commercial production of fertilizers. Notably, the President has made significant strides in ensuring that all the stages above are achieved before the conclusion his administration.

In order to manage the programme on behalf of government as a fund manager and programme manager in strict compliance with the programme objectives and under clear governance systems, the Nigeria Sovereign Investment Authority (NSIA) was appointed to serve as the implementing entity.

Besides the centrality of NSIA, operating through a Special Purpose Vehicle, NAIC-NPK Limited and responsible for funding and implementing the PFI, there are other key parties to the programme. These include – the Federal Ministry of agriculture and Rural Development, Office of the National Security adviser (NSA), Central Bank of Nigeria and the Fertilizer Producers and Suppliers Association of Nigeria (FEPSAN).

Others also include OCP: State-owned Di Ammonium Phosphate producer, on behalf of the Government of Morocco, the Blending Plants accredited under the PFI, the Agro-Dealers and State Governments who off-take the finished products from the Blending Plants and retail to the farmers, International Institute for Tropical Agriculture (IITA), Ibadan and Ahmadu Bello University, Zaria – for testing the products to ensure consistent in quality of product mix.

The PFI has successfully resuscitated the fertilizer blending industry, increasing operational plants from 4 in 2016 to 41 as of year-end 2020, saved Nigeria a whooping US$200 million in foreign exchange, and ₦60 billion in budgetary provisions for fertiliser subsidy, enhanced food security as a result of the increase in food production, reduced food-induced inflation and stimulation of economic activities across the agriculture value chain and created over a hundred thousand direct and indirect jobs.

Looking at the fertilizer and closely related agricultural sector big picture, it is worth recalling that in 2015, President Muhammadu Buhari inherited an agricultural sector that was weakened by serial policy inconsistencies. Nigeria solely depended on importation of fertilizers and a subsidy regime that only served to assuage the thirst of corrupt middlemen.

But in the last six years, Buhari has led a revolution which has seen millions of Nigerians salvaged from the fangs of poverty and squalor. These Nigerians are farmers: the hitherto forgotten majority and silent majority of our 200 million population.

Buhari’s revolution succeeded not because his predecessors had not tried. There had been various agricultural policies over the years – all targeted at helping the Nigerian farmer. There was the Operation Feed the Nation, Green Revolution, the Growth Enhancement Support (GES), the Agricultural Implements and Mechanisation Services (AIMS), among others.

They all failed to achieve their mandates partly because they were centered around the elite. They substantially excluded the real farmers, who are in the rural areas. For instance, the Agricultural Transformation Agenda (ATA) of President Goodluck Jonathan administration was elite centered, used urban-based mechanisms such as mobile phones to distribute fertilizer and other farming requirements to the farmers who are scattered across the width and breadth of Nigerian rural areas.

The e-wallet system for fertiliser allocation and distribution introduced by Jonathan’s administration fed fat the voracious middlemen and unscrupulous government officials. The real grassroots farmers were craftily and systematically shortchanged.

When the President assumed office, he made it clear he would have none of that. He was determined to reverse this position in a sustainable manner. He had clearly studied all the failed past attempts to revive agriculture and understood the key challenges. He identified adequate financing and access to these financing by rural peasant farmers as a cog in the wheel of progress of the country’s agricultural development.

Without any delay, the president co-opted the Central Bank of Nigeria (CBN). Under the dynamic leadership of Godwin Emefiele, the apex bank accurately understood the president’s body language and swung into action. The CBN become a strategic driver of economic growth of the country.
The CBN under Emefiele introduced various initiatives for concessionary funding of agriculture, which is widely recognised as the sector that has the potential to drive economic growth.
In the agriculture sector where rice production has received the most focus, the CBN development finance initiatives such as the Agricultural Credit Guaranty Scheme, Commercial Agricultural Credit Scheme and Anchor Borrowers Programme (ABP), among others have tremendously helped to reposition the agriculture sector in the country.

The key initiative, amongst several, that became the epicenter of the agricultural revolution is the Anchor Borrowers Programme (ABP), which was launched by President Buhari on November 17, 2015 to create a linkage between anchor companies involved in the processing and small holder farmers of the required key agricultural commodities. The programme has focused primarily on rice production.

Emefiele recently said that in line with President Buhari’s directive, the bank would boost provision of improved seedlings and access to finance for rural farmers in the agricultural sector, across 10 commodities: Rice, maize, cassava, cocoa, tomato, cotton, oil-palm, poultry, fish, and livestock/dairy.
His words: “Our choice of these 10 crops is driven by the amount spent on the importation of these items into the country, and the over 10 million jobs that could be created over the next five years if efforts are made to expand the cultivation and processing of these items in Nigeria.”

But Buhari’s silent agricultural revolution is reincarnating the Nigerian pyramids all over the country. Recently, the biggest rice pyramid in Nigeria was unveiled in Kebbi State. It was unveiled by President Buhari. Before that of Kebbi, other rice pyramids were built and unveiled in Taraba, Kano, Zamfara, Plateau, Cross River, Sokoto, Nasarawa, Lagos, Katsina, among others.

As statistics from the CBN showed that the ABP has added six million metric tons to rice supply in the country annually and created nearly six million direct jobs in a year.
Official data from the Rice Farmers Association of Nigeria (RIFAN) reveals that about two million direct jobs are created every cropping season. And Nigeria has three cropping seasons in a year, all of them fully funded by the CBN. These jobs are restricted to only the production value chain of rice, and not include millions other jobs created in the processing, packaging, transport, marketing sectors of the rice ecosystem.

The ABP has so far saved Nigeria a whooping sum of N369 billion per annum, while the country consumes N1.5 billion worth of rice every day. This breakthrough has saved the country the challenge of sourcing forex or devaluing Nigeria’s currency to finance this monstrous import wage bill.

President Buhari has clearly demonstrated leadership at a very difficult period in the evolution of a stable, just and progressive Nigeria state – and the results are showing.