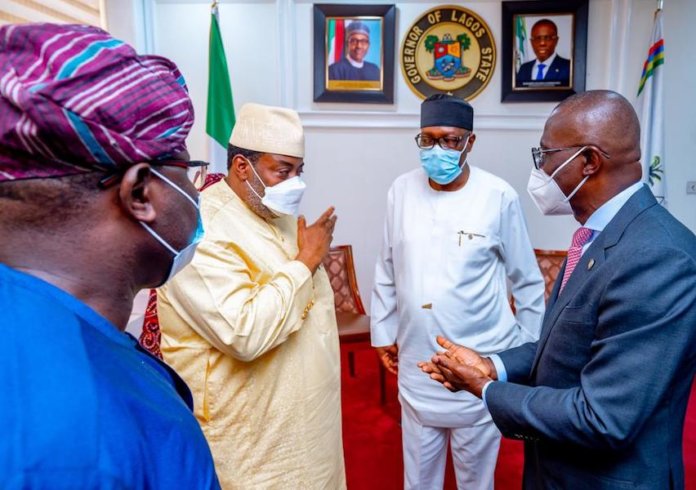 During the visit, the team had observed some structural defects in some of the projects, lack of water and power supply, as well as absence of perimeter fencing in some of the schools.

House Committee Chairman on Basic Education and Services, Professor Julius Ihonvbere who gave his asssement on the tour, expressed concern that most of the schools did not incorporate landscaping , play ground and recreational facilities which is very critical for the development of children.

“They have very beautiful buildings, but the environment is not spacious enough, which needs to be addressed. But we are still concerned about playing ground and playing facilities for children as play is an integral part of children development . We are looking at the perimeter fencing particularly in these days of extensive insecurity and invasion of our schools. Perimeter fencing is critical, ” he said .

He called the attention of the board to the challenges, adding that it would also do same for the Universal Basic Education Board ( UBEC) Abuja so that they could relate the state’s matching grants to its deployment.

On the issue of poor power supply in the schools, Ihonvbere said though it is a national problem, but if it is left in the hands of the private sector, the country, will be better for it.

According to him, “The power issue is a national problem, we have deregulated the sector, but even after deregulating the sector, there are still a lot of inefficiency in the system. I think people have advocated alternative energy . Most of the schools UBEC is intervening in these days, include solar-powered lighting and people have talked about other forms of energy. So I think the issue is for there to be investment in the private sector, so that we can move the government away from the supply of power for it to go round.

“It is like petrol until the refineries were privatised, the turn around maintenance was a waste of time, we have done it before, it didn’t work. If you compere it to other sectors, it is the issue of proper privatisation. Let the private sector achieve its ultimate capability and provide Nigerians with power. They are ready to pay. The schools are suffering , they still need power to work in the laboratory and other units. I saw that there are generators, it is a stop gap measure, not a permanent solution to the problem.”

The Executive Chairman, SUBEB, Wahab Alawiye-King who emphasised on the essence of the visit, said It was part of their constituency responsibility to ensure that the intervention from UBEC has been effectively utilised, adding that the board would be inviting the Lagos State Building Control Agency (LASBCA) to asses the faulty structure .

Hon. Mufutau Egberongbe, representing Apapa Constituency, stressed the need for collaboration between government and the private sector so that adequate provisions can be made for landscaping and waste disposals in public schools.