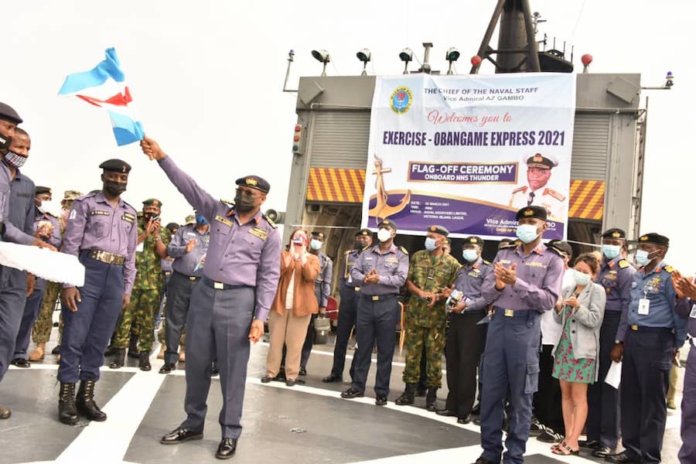 Chiemelie Ezeobi writes that in a bid to secure the nation’s maritime domain, the Nigerian Navy recently participated in the eleventh edition of Exercise Obangame Express, an annual multinational maritime exercise borne out of the need for Gulf of Guinea Navies to work together for regional maritime safety and security

For the Nigerian Navy (NN), its constitutional responsibility has always been mapped out; protecting the nation’s maritime domain from internal or external threats, which might come in form of piracy, crude oil theft and trafficking. As expected, the navy constantly seeks ways to hone its skills in carrying out their constitutional duties and one of such ways is participating in sea exercises or operations, either local or international.

Thus for the eleventh time, they actively participated in the international and regional Exercise Obangame Express, a maritime interdiction and interoperability exercise, designed to not only boost the capacity of individual navies that participate, but also provide opportunity for partner nations to work together, share information and refine tactics, techniques and procedures to assist African maritime nations in building capacity to monitor and safeguard their territorial waters and Exclusive Economic Zone (EEZ).

This year, for the Nigeria Navy, their focus was majorly on anti-crude oil theft, anti-piracy, and protection of oil and gas facilities.

In essence, the purpose of Exercise OBANGAME EXPRESS is to create realistic scenarios that reflect past maritime incidents. During the exercise, the Maritime Operations Centres (MOCs) are challenged to recognise these illicit acts appropriately and share with other MOCs. Additionally, the exercise will test each individual maritime force to patrol their EEZ and detect and prosecute illegal activity accordingly.

Therefore, it won’t be out of place to state that to a large extent, Exercise Obangame Express has been effective in terms of boosting surveillance at sea, given that each member nation in the region has specific exercises geared towards tackling the prevalent maritime challenges in their domain.

This year, the exercise was conducted in phases within the territorial waters of the participating nations and being the eleventh edition, the exercise had 32 participating countries from four continents with scheduled and specific pre-planned scenarios initiated by the Exercise Control Group (ECG) and Maritime Observation Centres (MOCs), who tracked suspect vessels through Regional Maritime Awareness Centres (RMAC), Falcon Eye and other maritime capability gadgets.

For this operation, six NN ships, two tugboats, and two helicopters were deployed by the NN. The ships include Nigerian Navy Ship (NNS) THUNDER, PROSPERITY, KARADUWA, NGURU, EKULU, and OSE, while the tug boats were TUG DOLPHIN RIMA and TUG DOLPHIN MIRA, which participated alongside the French Navy Ship DIXMUDE.

Additionally, a Nigerian Airforce ATR42 aircraft
joined the exercise, including an element of the NN Special Boat Services (SBS). The Nigerian phase of the exercise was conducted in the nation’s waters.

At sea, the fleet conducted several exercises including Anti-Piracy Operations, Protection of oil and gas facilities, fleet maneuvers, communication, Vessel Board Search and Seizure (VBSS), Search and Rescue, among others, in conjunction with other regional navies and international partners.

Although the vessels were at sea, there was a behind the scene Maritime Operations Centres (MOCs), monitoring activities and telling them what has happened, which cuts across all stakeholders within ECOWAS and ECCAS.

At the flag off onboard NNS THUNDER, at the Naval Dockyard Limited, Victoria Island, Lagos, the Chief of the Naval Staff (CNS), Vice Admiral Awwal Gambo, who declared the 11th edition of Exercise Obangame Express 2021 open, noted that the multinational maritime exercise was birthed for regional maritime safety and security.

Reiterating that the event was an annual multinational maritime exercise, borne out of the need for GoG Navies to work together for regional maritime safety and security, he added that “this is as a result of the huge resources and vast potential being continuously undermined by multifaceted domestic and cross border threats. This challenges the dwindling prosperity of member states”.

Stressing that the exercise presented an ample opportunity for the Nigerian Navy to work together with other national and regional navies in the spirit of the Yaounde Code of Conduct, Gambo noted that “this code is designed to improve operational readiness, maritime domain awareness, information sharing practices and tactical interdiction expertise.

“This will enhance the collective capabilities of Gulf of Guinea and West African nations to counter sea-based illicit activities. It will also enhance the operational capability of the Nigeria Navy in its fight against various forms of maritime crime through information and intelligence sharing”.

While appreciating President Muhammadu Buhari for his untiring support to the development of the Nigerian Navy, the CNS also appreciated the United States of America government through the U.S. African command and other international partners for facilitating and sustaining Exercise Obangame Express over the years, adding that the sustenance of the exercise was critical to Nigeria’s national interest, given the huge contributions of the nation’s strategic maritime resources to national prosperity and development.

According to the Flag Officer Commanding (FOC) Western Naval Command, Rear Admiral Jason Gbassa, said the exercise was focused on maritime crime hotspots to improve maritime security operations in the GoG, adding that it
involves decentralised deployments of
assets by all the GoG navies and international partners, including the USA, Brazil, France, Italy and Canada, amongst others, to conduct a combined Maritime Security Operation in the GoG.

He said: “The exercise, therefore, is an avenue for participating Gulf of Guinea nations and international partners to collaborate towards addressing the maritime security concerns in the Gulf of Guinea. Exercise OBANGAME EXPRESS comes against the backdrop of piracy cases, illegal unreported and unregulated fishing, illegal exploitation of mineral resources, the proliferation of small arms and light weapons and other local and international threats in the Gulf of
Guinea.

“Within this context, maintaining Nigeria’s strategic deterrence posture and influence in the maritime environment is critical to our economic prosperity and regional stability. It is my firm belief that OBANGAME EXPRESS 2021 will give additional impetus to our overall operational maritime combat experiences to ensure that the nation’s territorial integrity is maintained in line with the Nigerian Navy constitutional mandate. On our part, we will continue to work
with our regional navies and partners to stamp out criminalities in the Gulf of Guinea in general and our maritime domain in particular.”

Role of US Government

According to Director of Maritime Headquarters, U.S. Naval Forces Africa, Rear Admiral Michael Baze, “Obangame Express allows us to develop skills, with our regional partners, that will have a lasting impact on regional security in the Gulf of Guinea and the Atlantic Ocean. Our past exercises led to tangible, real-world success stories and OE21 is a chance for us to build upon those successes.”

Meanwhile, at the flag off in Lagos, U.S. Consular General, Ms. Claire Pierangelo, who noted that maritime threats in the GoG had continued to evolve and were becoming increasingly difficult to address, noted that a secured maritime environment is integral to other dimensions of security.

Since Nigeria relies heavily on the sea for commerce and international trade like any other maritime nation, the kick off of Exercise
Obangame Express was timely and quite germane given the need to jointly tackle the security challenges of piracy, poaching, smuggling, oil theft, trafficking and other transnational crimes. Thus, the exercise entailed interoperability and creating a maritime domain awareness, as part of a multinational training organised by America and African Partnership Station (APS).

The exercise is a maritime interdiction based on simulated scenarios of the most prevalent transnational crimes at sea, also designed to improve cooperation among participating nations for the benefit of the GOG. Its core objectives is geared towards improving the maritime domain awareness capability of concerned nations, enhancing the maritime interdiction capabilities of maritime forces and inculcating the spirit of interagency and sub-regional co operations amongst maritime forces and concerned countries. This is because the insecurity in the Gulf of Guinea, has led to the loss of billions of dollars by countries within the coast of West Africa, particularly countries like Nigeria which relies on sea for commerce and international trade.

Thus, it gives cause for concern when such huge resources and potentials in the Gulf of Guinea are being undermined by multifaceted domestic, regional and international threats and vulnerabilities. So collaborative opportunities like this seek to curb maritime illegalities, which is also in line with the navy’s vision of zero tolerance to such maritime illegalities.

Started in 2010 as one of the four United Nations Naval-Forces Europe-Africa-facilitated regional exercises, it focuses on increasing capabilities to deter piracy, illicit trafficking and other maritime threats. Over the years, it has gone from basic tactics to regional cooperation, with the core essence being to improve the capacity of the African navies to combat crime in order to allow economic activities at sea to flourish.

The exercise serves as an aim to increase the collective ability of African, European, South American and United States maritime forces to work together in order to increase maritime security and sustain global commerce. Furthermore, it was an avenue to buttress the cliche that ‘there is strength in numbers’, as well as strengthened regional cooperation to help address challenges that no nation is capable of tackling alone.

In all, this year, the operation afforded the navy the opportunity to sharpen their skills on anti-piracy operations, test their ability to share information and contend criminalities within the GoG. It also tested the tactical skills in Vessel Boarding Searching and Seizure (VBSS), seamanship and Communication Exercises (COMMEX).

Thus, having participated in this year’s exercise despite the hitches, it behooves the Nigerian Navy to tap into the benefit of the exercise, especially as regarding training and capacity building, which in effect will be a force multiplier in tackling head long maritime illegalities and criminality on the GOG waters.