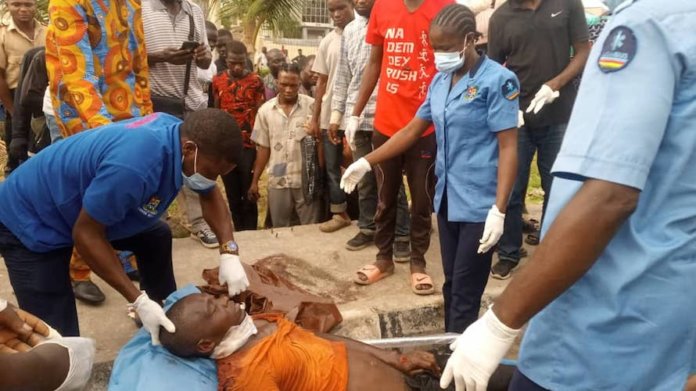 The Lekki Concession Company (LCC) yesterday (Wednesday, March 31, 2021) rescued an injured pedestrian who was abandoned along the Igbo Efon end of the Eti-Osa-Lekki-Epe Expressway.

It was gathered that the man was dumped beside the road by an unidentified vehicle which sped off.

An eyewitness reported the incident to the LCC’s Route Patrol Team, which mobilised to the site, and administered first aid treatment to the injured man.

They were joined by the Lagos State Ambulance Service (LASAMBUS) and officers from the Ilasan Police Station in the Lekki axis.

The man was stabilised and taken to the hospital in an ambulance provided by LASAMBUS.

Commenting on the incident, LCC’s Head of Route and Incident, Michael Aina, said the timely intervention helped in saving the man’s life.

Aina added that LCC provides such value-added services to all road users aside from the maintenance of the expressway.

“LCC makes it a point of duty to ensure commuters’ safety and security along the Eti-Osa Lekki-Epe Expressway, as this is one of the company’s core obligations.

“As users of the express road will testify, despite the toll plaza not being operational since October 2020, LCC has continued to render essential services free of charge to all road users. This includes free 24/7 emergency assistance, vehicle breakdown and recovery services and security patrol to all road users plying the Eti-Osa Lekki-Epe Expressway,” he said.

Aina assured the public of LCC’s commitment to ensure that the road is safe and secure for all road users.