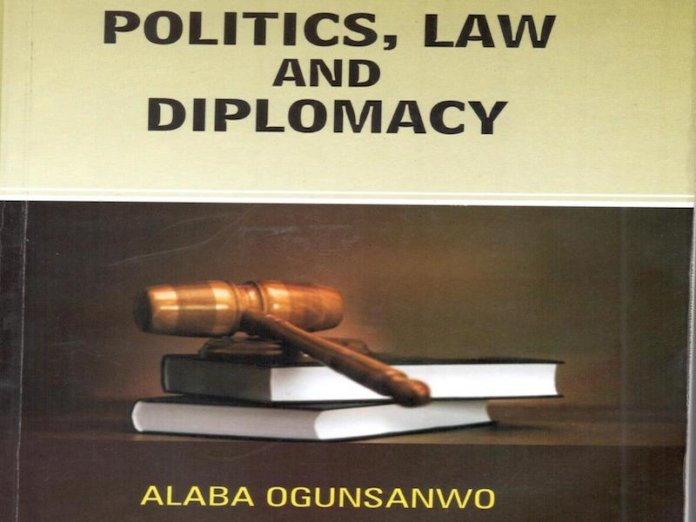 The book, Politics, Law and Diplomacy, by Alaba Ogunsanwo is dedicated to a veteran Nigerian diplomat, Edward Olusola Sanu. Ambassador Sanu, who is now over 90 years old, made his mark when he led the group of African, Caribbean and Pacific (ACP) countries to negotiate trade relations with the European Union (EU). The outcome was the Lome Convention of 1975. This is a fitting dedication as the book is an exploration of Nigeria’s relations with other nations.

Ogunsanwo ended his diplomatic career as Nigeria’s ambassador to Brussels in 1999. He was a professor of political science at the University of Lagos in 1983 and currently teaches in the Department of Politics and International Relations, Lead City University, Ibadan. He had his first degree at the Ahmadu Bello University, Zaria, and post graduate studies at the London School of Economics. He has been affiliated with other local and overseas educational institutions. It is with such formidable credentials of diplomatic experience and academic rigour that Professor Ogunsanwo penned his book Politics, Law and Diplomacy, the subject of this review.
Politics, Law and Diplomacy is Prof. Ogunsanwo’s collection of essays on various topics about the international system and the roles Nigeria played within that system at the West African, African and global levels. The book is divided into two sections, 39 chapters and ten appendices. The essays were written and delivered at various fora between 2007 and 2019. Section 2 is devoted to diplomacy, international legal order and international institutions. The narrative, rich in data, discusses Nigeria’s relations with major powers, middle powers, smaller powers, and equal-level powers. It identifies some countries and examines Nigeria’s bilateral relations with each of them on trade, aid, foreign direct investment, political and security matters, regional integration, growth and development.

Nigeria’s interests, pursued through its consulates and other establishments, were outlined to cover economic, political, cultural, educational, religious, and commercial spheres. The author stressed that concerns for security and welfare as well as growing globalisation and interdependence, have made countries to relate with each other as a matter of necessity. As a result, Nigeria, like other countries, has no option than to belong to regional and many bilateral and multilateral organisations. That was why Nigeria in concert with other countries formed the Organisation of African Unity (OAU), now African Union (AU); the Economic Community of West African States (ECOWAS), and enlisted as a member of the United Nations Organisation (UNO) upon attainment of independence in 1960.

Nigeria made enormous contributions in terms of human capital, material and massive mobilisation of public opinion to stamp out colonialism and apartheid in Africa. These are narrated as firsthand account in details with great expertise and insider knowledge by Professor Ogunsanwo. He was directly involved as the top Nigerian envoy in Southern Africa during the de-colonisation and apartheid era and reflected his physical involvement in steering crucial events at that material time. Having also served in several foreign policy review bodies of Nigeria, he can be regarded as an institutional memory in his own right. He observes that for all its sacrificial contributions in helping many African countries out of the woods, Nigeria has maintained a policy of not demanding requital from those countries for services rendered. This position, criticised by some Nigerians, is contrary to the practice whereby a country that plays a major role in helping another in times of war or social disaster usually demands economic or political compensation from the beneficiary country.

As both a political scientist and scholar, the author keenly observes significant changes in the international system in recent times, especially since the world moved away from the Cold War era in 1990. Given what some regard as a unipolar world that emerged from the ideological warfare, the policy of non-alignment diplomacy adopted by most developing countries became outdated and impracticable. Attention is now focused on democratisation, development and environmental protection. One could argue, though, that what we have now is a mere change of tactics among the former Cold War antagonists as trouble spots all over the globe still throw up their fundamental differences in one form or another and remain the underlying causes of much of the conflicts raging in those places.

In pursuing its national interests, Nigeria developed a policy of concentric circles. The innermost represents engagement with its immediate neighbours and radiating outwards to the international community beyond Africa. The establishment of ECOWAS, the Technical Aid Corps, articulating the idea of Concert of Medium Powers, Economic and lately, Citizen Diplomacy, among other policies, were pursued in the concentric circles diplomatic practice. However, developments in technology have significantly changed the way and manner Nigeria and other countries conduct their diplomatic activities to achieve their national objectives.

Multilateral arrangements, such as the ACP-EU Trade Agreement, though guaranteed market to both parties, the overall effect tended to perpetuate the unhealthy relationship whereby the developing partners continue to be suppliers of raw materials in exchange for manufactured goods. The European Development Fund which was ostensibly created to help the developing countries merely encourages complacency towards industrialisation among them as they became content on drawing grants from the Fund.

The World Trade Organisation (WTO), which replaced the General Agreement on Trade and Tariff (GATT) is also unlikely to change the situation, so long as WTO enforces the removal of barriers in international trade. Unfortunately, this situation will remain so even with the coming into force of the African Continental Free Trade Area (AfCFTA) in 2021.

Nigeria and the other developing countries in the increasing globalised world would need to redouble their efforts to add value to their products if they are to increase their participation in the world trade of industrial goods. In Africa, Nigeria has a unique attraction in having a huge market. It also has a higher risk of being a dumping ground of finished goods from elsewhere and therefore needs to adapt to ever-changing situations in the international system.

In taking a deeper look at the international system and its future developments, Professor Ogunsawo underlines certain principles and realities which come into play and affect the capacity of Nigeria and other countries to achieve their goals. Among these are: that no international organisation can do more than its members want it to do; that every state is responsible for its development – as such, it is up to the concerned country to create a conducive environment for investment; that although a country may want to emulate others, the environments may not be the same; that in certain world organisations some members may enjoy equal votes irrespective of size but capacity to influence others is not evenly shared and so some countries would continue to have their way and lord it over others; that he who pays the piper dictates the tune – that means financial clout matters in the international system; and that there will be increasing influence of civil society organisations and inclusiveness of gender participation.

It is quite an impressive effort on the part of Professor Ogunsanwo to put up such a voluminous and enriching book of 1,296 pages to aid our understanding of the workings of the international system and the place of Nigeria in it. I am not surprised. I knew him from our days as students at the Ahmadu Bello University, Zaria, to be the studious type as he paced from hostel to dining room to classroom and vice-versa. There were no games for him. Only his studies mattered.
Some obvious editorial and printing errors have resulted in the omission of chapter 13, a repeat of chapters 15 and 16, and consequential mix-up in page numbering.

The book by Prof. Ogunsanwo, an academic-diplomat, is a valuable reference material to all who seek to know how Nigeria’s diplomacy was shaped and conducted from independence to date, the complexity in interactions in the international system as well as the delicate functioning of the multilateral organisations like the United Nations Organisation. I strongly recommend it.