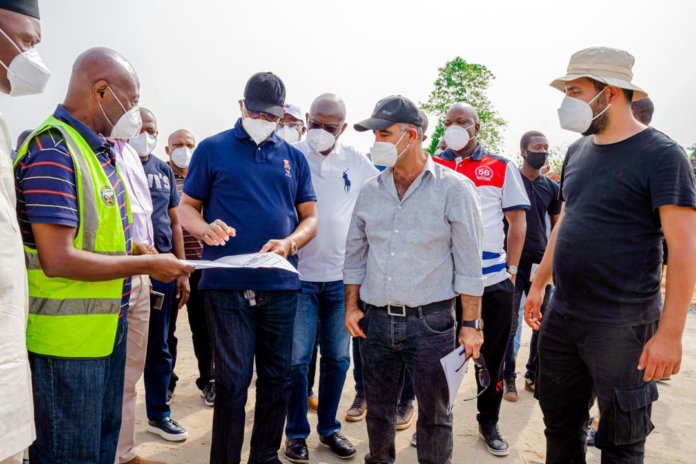 The Orubo Family of Iperu Remo, owner of the swatch of land where the Ogun State Government is currently building a cargo airport have threatened to invoke the disciplinary jurisdiction of the court to stop further work on the project.

In an open letter to the Ogun State Governor, Prince Dapo Abiodun written by their lawyer, Mr. Babatunde Oshilaja, the family said their land had not been legally acquired by the state government and therefore could not commence any work on the land.

The letter read: “Without any prior statutory notice as required by Section 44 of extant Land Use Act, nor payment of any compensation to the Orubo Family and the other interests’ holders on the land as guaranteed by Section 44 of the Constitution of the Federal Republic of Nigeria, 1999 (as amended) Governor Gbenga Daniel deluded himself into announcing with gusto, the alleged and illegal purported revocation of my clients’ farmland in Iperu – Remo.”

The family said that in exercising their right of ownership they sold portions of the land to third parties and executed a certificate of surrender of their Deemed Right of Occupancy on the portions sold.

The family said that they would ask the court to order cessation of further contemptuous construction activities and the immediate and unconditional removal of all building/construction equipment and personnel from the land.

While admonishing the governor to act in accordance with the oath of his office, the family expressed concerns at “recent trespassory acts and unlawful and illegal developments by officials’ of the Ogun State Government with particular reference to the Agro-Cargo Airport.

They also reminded the governor that the land in question is located in Iperu and not Ilishan and erroneously stated in a statement by the state government.
Penultimate week, the family protested in Iperu calling on the governor to compensate them in line with the Land Use Act.

While protesting at the governor’s house in Iperu, the family said while they were not against acquiring their land for the airport, they deserved to be compensated.

The head of the family, Alhaji Waidi Alaka, said they inherited the land from their forefathers and looked forward to handing over the land to their children.

The land in dispute is a large expanse of farmland lying and being at Iperu, along Iperu-Ilishan Road, Ogun State measuring approximately 136.070 Hectares (336.2 Acres) including 9.674 Hectares (23.90 Acres).

During the protest, members of the community among them elderly men and women besieged the governor’s residence in Iperu, and from there marched to the disputed land carrying placards with various inscriptions.

Some of the inscriptions read ‘Governor Abiodun please come to our rescue’, ‘Our Land Is All We Have Left’, ‘Our Support For Government Should Not Be a Curse to Us’, ‘Ministry of Physical Planning and Urban Development Respect Court Judgement’ among others.

They also exhibited a copy of an Ogun State High Court judgment which they said declared them the rightful owners of the land.

Alaka, who read a prepared speech at the airport site alleged that there was an ongoing illegal clearance with caterpillars and stampeding planting of survey pillars on their family land for the cargo airport by the Surveyor General of Ogun State.

He wondered why government desired to take over their land when no notice of revocation had been issued on any portion of the farmland nor was any compensation paid as mandated by Section 44 (1) (a) of the Constitution of the Federal Republic of Nigeria, 1999, (as amended).

He said ‘’up to the time of issuing this statement, the government of Ogun State under Governor Gbenga Daniel or any other subsequent administrations of Ogun State never issued, nor served on Orubo family or any of its members any prior notice of revocation of our deemed statutory/customary right of occupancy on any part or portion of our farmland including the portions sold to the three companies aforesaid for their alleged Cargo Airport as enacted by statutory law in Section 44 of the Land Use Act nor was any compensation paid as contained in Section 44 (1) (a) of the Constitution of the Federal Republic of Nigeria, 1999, (as amended).”

According to him, Orubo family’s progenitor named Odubiro who was a hunter and prominent leader of Lopere military society migrated from Ile-Ife as a refugee from slave traders and settled in the vast area of land as a hunter and private soldier and he successfully held and defended the eastern boundary of Iperu-Remo during the 19th Century Kutujen War of Iperu-Remo.

Alaka stated that the Orubo family had enjoyed ownership of the statutory and customary rights of occupancy on the farmland for centuries adding that part of the land was sold jointly to Beauty Fair Laboratories Nigeria Limited and Sophisticat Nigeria Limited and another 13.546 (33.473 Acres) to Skin Beauty Limited respectively.

According to him, after the sale of portions of the Orubo farmland to the three companies, the head of Orubo family on May 21, 1999 executed a Certificate of Surrender of a Deemed Right of Occupancy in favour of the companies and same was approved by then Permanent Secretary/Director General Bureau of Lands, Survey and Town Planning.

Besides, he said the family is in possession of the judgement of an Ogun state high court, delivered on October 10, 2011 by Justice N.I Saula in suit NO HCS/123/2002 Ope Osu & others Vs Jonathan Famodu & others confirmed that the land being cleared belonged to Orubo family.

The court had declared that from the totality of the evidence before the court, the plaintiffs proved their entitlement to a deemed land of occupancy over the land Orubo farm being Iperu along Iperu Ilishan road.
Justice Saula in his judgment held that ‘’no glaring evidence of government acquisition of the land in dispute was placed before the court. None of the defendant’s witnesses was able to produce the notice of revocation of the right to the land’’.
The family urged governor Abiodun to intervene in the matter and come to their rescue.