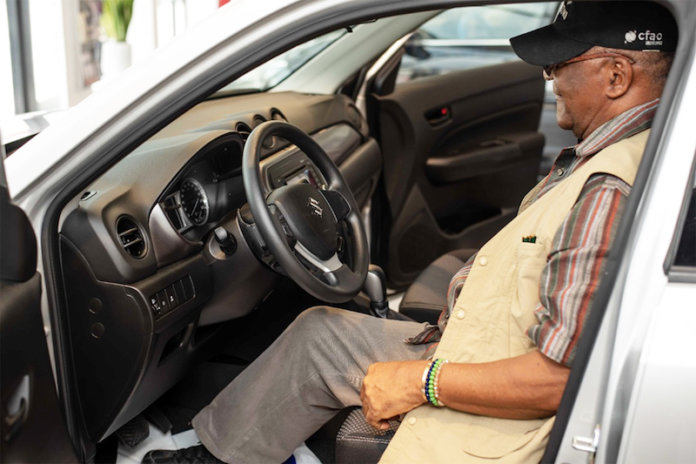 Responding to questions from the motoring journalists shortly after the deal about his new role was announced, the one-time chairman of Costain West Africa plc and recipient of many awards over the years said that his affectionate relationship and emotional attachment with Suzuki spans over 30 years. ‘’I still drive Suzuki cars so I don’t think I ever stopped being a brand ambassador. I truly believe in the brand and have personally experienced its value. However, I must say that it is a good thing to be able to officially stand for them in this capacity. I certainly feel honoured about the recognition and encouraged by their commitment to providing quality cars and aftersales service’’.

Dr. Jibunoh also told automotive journalists that his new role is an opportunity to share his desert stories with Suzuki and the many things that can be done for the environment with this platform.

On some of the most difficult challenges facing him as Suzuki brand ambassador over the years, he had this to say, ‘’Well for one, I am trying to convince Suzuki that they have the brand most suitable for the environment i.e nature (laughs). Very little so far. Maybe ask me this question in a year.

At over 80, he shared in his submission, ‘’the secret to my agility is my relationship with nature. Nature cares for those that care back for it. I take long walks to appreciate its beauty; I try to eat only organic food and also, I listen to my body and understand it’’.
Sharing his perspective of Nigeria’s automotive industry, he opined that Nigeria needs more cars that can be adaptable to our environment particularly due to the exceptionally rough terrain, dotted with potholes and flood-prone areas.

This is where Suzuki comes in, and he can attest to the vehicles being durable and suitable for the average Nigerian road. ‘’If it could withstand the desert terrain with little to no issues, our potholes and floods is nothing to it. More brands need to replicate this’’. Said the ‘Desert Man’’.

He also expressed concern over the high cost of vehicles which are beyond the reach of the middle class in the society, ‘’There is also a need for cars to become more affordable in the country. I recently read that just about 2 percent of the population could afford to buy a new car. A lot of our cars are old and badly maintained, this is bad for the environment. However, there’s little that can be done without the right policies in place and the will to implement them. I am however encouraged that Suzuki has established partnerships with leading Nigerian banks to provide suitable financing offers’’.

In a chat with automotive journalists on what informed the decision to sign Newton Jibunoh as brand ambassador for Suzuki, Aissatou Diouf, General Manager, CFAO Motors (Suzuki) told our reporter, that the Suzuki franchise was excited by Jibunoh’s exploits following his crossing the desert three times with Suzuki vehicles. ‘’He also has a few in his fleet and we believe he will be a credible ambassador because he trusts the products and can testify about them’’. She added.

Responding to the model of Suzuki vehicles chosen in this latest war against desertification project, the CFAO Motors (Suzuki) General Manager under whose tutelage the Japanese brand is witnessing continued penetration said, the partnership will promote the brand, the full range of cars with a spotlight on the Vitara SUV since that is what he used to cross the desert.

Commenting on the selection of Newton Jibunoh as Suzuki brand ambassador, Aissatou Diouf said it was a smart decision because he is a reputable Nigerian who is fighting for a noble cause and we are glad that Suzuki is part of his story.

While trying to elucidate more on the marketing and environmental essence of connecting the Suzuki brand with this celebrated Nigerian brand ambassador, the General Manager pointed out that Suzuki specialises in small engines, which generate less pollution, and in essence contribute to a more environmentally friendly world.
The Suzuki models available in Nigeria are city cars: Alto, Dzire, S-Presso, Swift, Baleno, Ciaz, and Ertiga. The Off-Road Vehicles/Sports Utility Vehicles (SUVs) are Jimny and Vitara.

CFAO is a key player in specialised distribution in Africa and the French overseas territories and a partner of choice for major international brands. The Group is a market leader in automotive and pharmaceutical distribution and continues to grow in consumer goods, new technology, and energy solutions. CFAO has a direct presence in 36 African countries and provides a gateway to 49 of the 54 countries that make up the African continent. The Group is also active in seven French overseas territories and in Asia. CFAO employs more than 15,000 people.