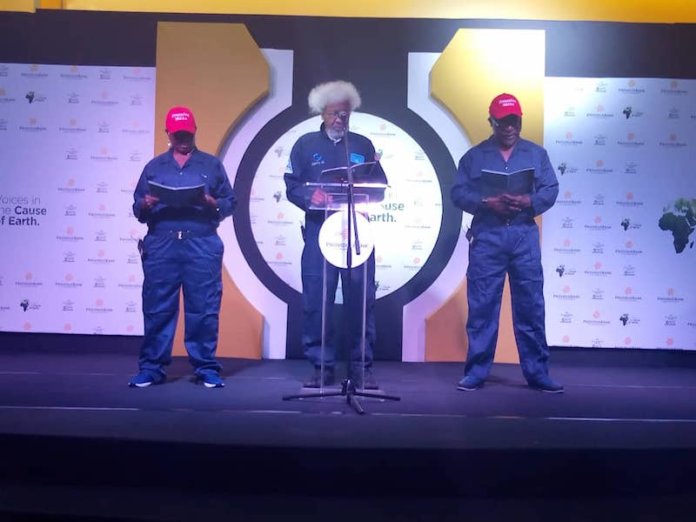 Earth, the only habitable planet, was the crust of the poetry performances in honour of the UNESCO-acclaimed World Poetry Day. Yinka Olatunbosun reports

When the World Poetry Day Celebrations, sponsored by Providus Bank, kicked off in 2019, it was held at an unconventional venue- the banking hall. But then, the pandemic and its cancel culture impacted last year’s edition and so, last Sunday’s was the second edition of the World Poetry Day with the Nobel Laureate, Prof. Wole Soyinka.

With the theme “Voices in the Cause of Earth,’’ the audience at this year’s edition was drawn to the environmental issues of global warming, plastic waste, deforestation through a series of poetry performances from the cross-generational line-up of poets.

The nerve-calming voice of Jazz singer, Yinka Davies opened the grand-event in an atmosphere of social distancing and measured camaraderie at the Eko Hotel and Suites, Victoria Island, Lagos. One of the inspiring goose-pimple moments at the event was the appearance of Prof Soyinka on stage alongside actress, Mrs. Taiwo Ajai-Lycett and actor, Bimbo Manuel- all three clad in astronaut-styled jumpsuits. It was a mind-blowing moment for the audience as they listened to the leading lyricist’s reading of his poem titled “2009: A Space Odyssey’’ with a humourous foreword by Soyinka, the “Ogunkanako of NASA.’’

Based on his brief stint at the National Aeronautics and Space Administration (NASA), the poem takes a retrospective look on the shelved celebration of the 50th anniversary of humanity’s first landing on the moon with the first commercial space flight. The 15-page poem is divided into several parts: the prelude, the Countdown: Zero-Gravity, Cosmos (Un) Bound, Nirvana, Recessional. Postscript-2019 and Post-Mortem.

“The Divination.’’ Spiced up by chants, his intro to the show was in itself poetic. The centre-stage performer is the publisher of the online newspaper, Phenomenal.

Although currently serving at the Armed Forces Command and Staff College as a commander and helicopter pilot, Umar Abubabar Sidi gave a witty account of himself in the poem “Poets and Salamanders’’ where he questions the gradual extinction of the green life.

For the poet, actor and culture advocate Reginald Ofodile, his poem “Deadly Device’’ burrows into how profiteers have jeopardized the purity of the earth with activities such as pollution and industrialization that destroy the ozone layer and threaten green life.

The Director of Poetry, Lagos International Poetry Festival (LIPFEST) Efe Paul Azino took the audience on an imaginary travel through Nigeria with the poem titled “After the Floods.’’ In it, he bemoaned the economic devastation as well as loss of precious human lives occasioned by the floods.

Other young poets at the event include Phebe Benjamin, Bestman Michael, Increase Nathaniel and Bariga Poets Collective. The event also had as special guest poet, Odia Ofeimun who turned 71 recently. The prolific author and scholar has over 30 publications including poetry collections such as The Poet Lied (1980), A Handle for the Flutist (1986), Under African Skies (1990), London Letter and Other Poems (2000), A Feast of Return (2000), Go Tell The Generals (2010) amongst others.